Dwarves of Athas Part 2: Dwarves Under a Dark Sun 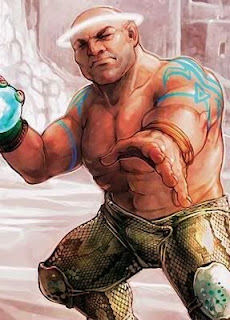 Unlikely as it seems to the well traveled, some villages in the wastes have never laid eyes upon a Dwarf before. It is for these isolated villages that I will write a physical description of this proud race, I only hope they can read it.
Dwarves stand shorter than humans, but taller than Halflings. Dwarves are also extremely wide, with large hands and feet and broad shoulders. Dwarves are heavily muscled and generally completely hairless. I have only seen two Dwarves with some hair atop their heads. Most Dwarves live a life full of hard work, so they have calloused hands and deep tans.
In fact, I once met a Dwarf named Yorgos, who had smooth, almost soft hands. His family were nobles from Balic, but he had been cast out for an indiscretion he was unwilling to share. The Dwarves of South Ledopolous looked down on him for being "soft" and openly mocked him. Being inexperienced in hard work, he died of dehydration or starvation. I can't remember which.
I asked another Dwarf friend of mine, Arsenios from North Ledopolous, to tell me what Dwarves think of the Tablelands and their place in it. I only spent a few bits for drinks to loosen his tongue.

We Dwarves are hard, because the world demands that we be hard. The hot winds that blow across the desert and the blazing sun that burns us make us stronger. Like the obsidian that comes from the unrelenting volcanoes. Other races deal with the heat and repressiveness of the world in different ways, but Dwarves, we just accept it and endure.
Dwarves are varied, almost as much as you humans. Except for a couple of things. We have a focus that we must complete, unlike the flightiness of Humans and Elves, and we all hate defilers. I've heard it said that Dwarves cannot learn to become defilers. I'm not too sure about that, it's just that we have too much sense to want to learn to become one. We are a practical people who enjoy the kind of work that everyone else seems to avoid.
We value work as an extension of ourselves. I've heard it said that humans try to find their place in this world. Well, we Dwarves work hard make a place for ourselves, not simply find one. We see our work as an extension of ourselves. We judge each other by their willingness to work and their accomplishments from that work. Work drives us, it's what makes Dwarves Dwarves.

It was here that Arsenios asked for another drink, which I paid for. I asked him about the famed Dwarven focus and it contributes to the Dwarves love of toil.

First, not all work is toil. Some can be, but work can also be done in the mind or psychologically. In fact, my cousin's focus was to get as rich as possible to provide for his family. Much of his work was planning how to invest his money, or where he would sell his goods for the best price. Work is not always labor, even for us.
What? Oh yes, our focus. Our focus is difficult for non-Dwarves to understand, just like it's difficult for us to understand living our lives without one. I can't imagine going through live with no direction, it must be quite terrifying for you humans. The best way to explain our focus is that it is an inward momentum that pushes us to achieve. As I'm sure you're well aware, that if a Dwarf dies without completing their focus, they return. Wracked by the agony of their failure.
Close your mouth Karpos, I know what you're going to ask next. You want to know why all Dwarves don't return, if to be a Dwarf is to have a focus, therefore you cannot complete it right before the moment of death. Keep in mind, I'm only telling you this because you have aided me in completing my focus in the past. The determining factor of when a Dwarf returns is based upon the Dwarf and their particular focus.
I know you're confused, so let me explain. If a Dwarf has a lifelong goal, like my cousin, then it is impossible to accomplish. He would return only if he forsook or abandoned his focus. However, if a Dwarf has a focus that only takes a few weeks or months, then he would probably return if his work was left unfinished. I mean, it's only a few weeks or months, he should have been able to accomplish it.
And don't go around asking a Dwarf what their focus is! It's no one's business but their own. If a Dwarf wants to tell you, they will tell you. Only if you can help though, otherwise there's just no point.
Now, I'm done with my drinks and I have to get back to work. Stones won't dig themselves up for that bridge, now will they?