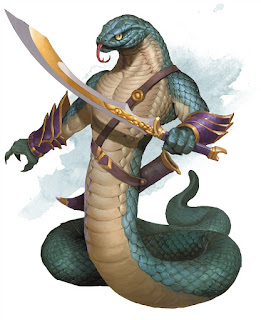 Ssuddha are the leaders of the yuan-ti. Ssuddha are either all snake (50%) or have only a single human feature, either head or arms, and are of large size (10 feet long). Ssuddha smell dry and musty. The snake features of these foul creatures vary greatly from simple green and brown scales to wild patterns of stripes, diamonds, and whorls in reds and blues.

Combat
Ssuddha are geniuses, and fight as such. They plan elaborate traps and utilize their surroundings
superbly in combat. They prefer ambushes to direct confrontation. In a mixed group, the least valuable and powerful attack the opponent first. The group leader may order particular members forward before others if it provides for a better strategy.
All Ssuddha may constrict their opponents for 1d4 points of damage. Ssuddha, if they have hands, usually use weapons or other items, preferring weapons with an edge. They use poison, particularly slow acting types. If a Ssuddha has a humanoid head, they usually become defilers, they use their tails and body movements to provide the somatic component. If a Ssuddha has a snake head, they may bite for 1d10 points of damage.
Ssuddha have a +3 save throw bonus to avoid the effects of non-magical poisons. However, their reptilian nature makes them slow and sluggish in cold areas, like night in the desert, and they add +3 to their initiative rolls in areas of cold.

Habitat/Society
Ssuddha are evil to the extreme and usually very narcissistic.  They believe themselves above lesser creatures, which is everyone. They rule over the other yuan-ti as tyrants. Ssuddha speak the yuan-ti language. They can also speak with any snake or snakelike creature. Those with humanoid heads speak other languages as well.

Ecology
Ssuddha are strictly carnivorous, eating any warm-blooded creature they can catch. They have a special taste for birds and human flesh. They have their lesser brethren keep flocks of erdlus and kitsus for feeding on, as well as the occasional human slave. Ssuddha can live for up to two thousand years.