Session Twenty-Two: The More You Know

The group was at Serena's hut, wondering what their next move should be. Serena was cooking, while fawning over Alaxander. He didn't mind. Shade had five hours before the meeting with Templar Tavio and Vashti told him that she didn't trust Tavio one bit.
They came to the conclusion that everyone who interacted with Tavio did not like him. They guessed that his half-giant bodyguard, Qom, and his pet psionicist, Utza, may not like him either. They decided to go talk to Utza.
They paid the gate tolls and made their way back inside Tyr. They took up position outside of the School of Thought, waiting for Utza to appear. After five minutes of waiting, Vashti and Alaxander got bored. They went to the marketplace, so Vashti could buy some crickets and honeyed grubs for snacks and Alaxander could buy a hat and scarf for Serena. Julius, Shade, and Kalino waited.
Vashti and Alaxander returned and and waited. A couple of hours passed and they spotted Utza walking toward the school. The group chose Alaxander to go talk to her. Alaxander jogged up to meet her and smiled. She was taken aback by his smile and stunning blue eyes.
Alaxander made some small talk with Utza and flirted with her a bit. Utza was responding positively, so Alaxander steered the conversation to Tavio. Utza admitted that she didn't like Tavio, but she had to work for him for the tuition deduction at The School of Thought.
He got her to tell him about a dwarf Tavio keeps in his home, a slave she thinks, and does not let him leave. Branak was his name. Alaxander walks her to her class and insinuates that he will see her later.
Alaxander returns to the group and passes along the information she gave him. The group decides to ask about the dwarf Tavio keeps as a slave. They returned to the marketplace and began asking questions about a dwarf named Branak.
Their first stop was a clothing merchant they had become acquainted with two days earlier. He had only been working in the Tyrian marketplace for six months and Tavio had been over the marketplace that entire time. He did not know a dwarf named Branak. He did direct them to a food merchant, Aban, who had been in the marketplace for much longer.
They walked into the open stall of Aban, the foodstuffs merchant. When Shade began talking to him, Aban mistook Shade for a half-elf with a fancy cloak and boots who have rescued his daughter from a slaver caravan. Shade did not correct him.
By questioning Aban, they discovered that Tavio had been administrator of the marketplace for about a year. Most Templars move on after a few months, but Tavio seemed to like his position and the money he was making. Tavio appeared far richer than his station provided. Shade then asked about Branak and was told that Branak was a potter and disappeared about eight months back. Aban then directed the group to a dwarf named Fadi, the potter, whom Branak used to work with. Shade thanked Aban and purchased a pound of farro flour. He paid Aban an entire ceramic piece, which is ten times the cost of the flour. 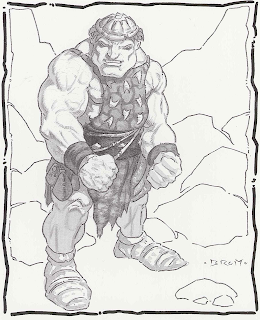 Join us in one week for another exciting session of Adventures Under the Dark Sun.