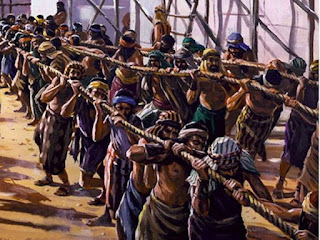 The slave wagon rumbled down the road to Silver Spring. They had left Urik in the predawn hours of the day. Gahal sat in the slave wagon, held his knees and stared at his feet.
As long as Gahal could remember he'd been a labor slave. Forced to do whatever menial tasks his master had demanded of him. He'd never left the lands around Urik, but now his master had apparently decided to sell him. He didn't know where the wagon was going, but it didn't matter. He'd given up hope of ever being free.
When the guards started yelling and rushing around, Gahal barely noticed. When he heard a guard fall to an arrow and the other slaves in his wagon start shouting, he raised his head to look. He couldn't see what was going on, but he knew the small slave caravan was under attack. Gahal curled up into a ball, trying to avoid any wayward arrows. He didn't much care about the attack. Whoever captured the caravan would simply keep him as a slave, so he didn't care who won the fight.
A guard died near the wagon and a human slave with more initiative reached through the bone bars and grabbed the guards obsidian knife. The slaves became excited as they sawed at the giant hair holding the door closed. Gahal didn't participate. It wouldn't work, Gahal knew, they wouldn't escape. He had no hope.
The wagon's door opened and the slaves began rushing out. Some of the slaves foolishly fled into the fray and were quickly cut down. Now alone in the cage, Gahal stared at the open door for a few moments. He crawled toward it and looked outside. The sun was still low in the sky as Gahal climbed out the wagon. He felt hope rise in his chest, a feeling he had abandoned long ago.