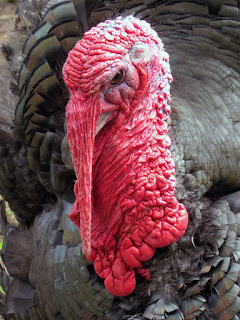 In honor of Thanksgiving, the United States holiday, I gave stats for the Athasian Turkey, which is mention in the Veiled Alliance sourcebook. Turkeys may seem an odd choice of animal to be present on Athas, but wild turkeys are actually quite cunning.
Turkey's are raised for food and feathers in the city-state of Draj. These turkeys have been domesticated and are far less dangerous than the wild turkey. Domestic turkeys are de-spurred when young, so it does not have a spur attack.
Happy Thanksgiving!


Domestic turkeys are bred for their meat and feathers. They are large, stupid birds and are herded by slaves in the land surrounding the city-states and penned up at night. They have been bred so large that they are not able to fly. They are de-spurred shortly after hatching and never develop the poison of their wild cousins.

Combat
Domestic turkeys will always flee rather than fight, but will peck with its beak if it's cornered. Even if engaged in combat, the domestic turkey will constantly seek a way to escape.

Smaller than their selective bred cousins, wild turkeys are fast and dangerous. Wild turkeys are able to fly and prefer to nest in the branches of trees. Wild turkeys can fly, but only in short bursts, being forced to land every 1d4 rounds.
Wild turkeys have excellent eyesight and reduce, by 5%, a character's chance of hiding in shadows and are only surprised on a roll of 1 or 2.

Combat
Unless protecting their young, wild turkeys prefer to flee. If cornered, the wild turkey uses their vicious serrated beak that inflicts 1d6 points of damage and a wicked spur on the back of its legs that inflicts only 1 point of damage. These spurs contain type C poison with an immediate onset time. The turkey cannot attack with both beak and spur in the same round, so it usually alternates between the two.

Habitat/Society
Turkeys seek the attention of females in sun ascending by wooing them with a special courtship dance. During this dance, male turkeys fan out their tail feathers, puff up their body feathers and display their brightly colored waddles in an effort to win a female.
After mating, the females seek out a good nesting spot. Turkeys lay their eggs in ground nests. They choose nest areas that are covered by brush to help prevent detection by predators. The female turkey lays an egg each day in her nest for up to 11 days. The eggs take about 28 days to hatch. Baby turkeys are helpless for six months.

Ecology
Turkey meat is white and mild tasting. It is desirable by the upper-classes because it easily takes on the flavor of the spices it's cooked with. A domestic turkey can provide twelve and a half pounds of meat and one pound of marketable feathers, while the smaller wild turkey provides only six pounds of meat and one-half pound of marketable feathers.