It was pointed out to me by Rovewin of Athas.org, that the hegbo is mentioned in the Ivory Triangle boxed set and Veiled Alliance sourcebook. However, they are not drawn up in any of the books. So, in an effort to rectify the situation, I have created the hegbo below. 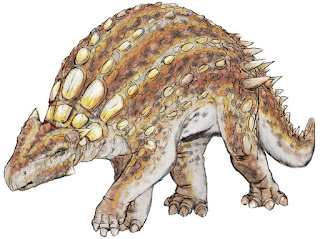 Hegbo
These large brown lizards are bipedal and wander the forests eating plants. They have bony spikes protruding from their hide, which protects them from predators. They are cautious around humanoids, but not generally hostile. Their behavior becomes extremely aggressive, however, if their young are approached or threatened.

Combat
Generally, the hegbo does not bother with most medium-sized, or smaller, humanoids. They don't see them as much of a threat and ignore them. If attacked, they are more likely to flee than fight, unless cornered. They bite with their beak-like mouth for 1d6 damage and tail slap with their spiked tail for 1d8 damage. Their tough hide and bony protective shell reduces damage from bludgeoning weapons by half.
However, if the hegbo feels that their young are in danger, they become enraged and fight ferociously. They almost always charge the offender, the charge negates the hegbo's normal attacks, but inflicts 2d8 damage with a successful strike. In addition, the hegbo ignores all morale checks, ignores all fear supernatural effects, and will fight until death.

Habitat/Society
Hegbos travel in family units, lead by the oldest female. Males are slightly smaller than females, but defend the young just as aggressively. Hegbos mate throughout the year, especially when different family units meet, so it is unknown when a family unit might have young present.
After mating, the female hegbo will lay one or two eggs in a ground nest. Until the eggs hatch, the eggs will not be left alone at any time. There will be at least two hegbos guarding the nest at any given time. Once the eggs hatch, the young have 2 hit points, but gain 1 hit die per year, until mature at their full hit dice. Once fully mature, they normally become members of the family unit they were born into.

Ecology
Hegbos eat plants and are in return eaten by larger carnivores. If killed, they do provide up to two-hundred pounds of tough, dry, and unpalatable meat. The meat may be sold in the city-states for 1 bit for every two pounds. They are unable to be trained as mounts, as their family unit tendencies do not extend beyond their own species.