Session Thirty-Seven: The Ruins of Yaramuke

As Shade was peeking over the short ridge, Jessel got a lost look in his eye. The other members of the group knew that look well. He apologized and said earth was summoning him. He opened a dimension door, with the will, and stepped through. Vashti lamented that water never summoned her. Kalino reassured Vashti that it was, perhaps, because Vashti didn't need as much guidance as Jessel.
Shade watched the zombies and slaves dig in the sand, uncovering the ancient ruins of Yaramuke. He used the will to improve his senses and could hear the overseers yelling at the slaves below them. Abu was asking one of the overseers about clues to the palaces location. Shade believed he heard all he needed to and took a quick look out over the horizon. He saw more ruins jutting up from the sand.
Once Shade returned to the group, he informed them of what he saw and heard. The group discussed the possibility of attacking Abu's group, but thought better of it. They decided instead to begin their own investigation of the ruins.
They chose to inspect a dome Shade saw in the center of the ruins that was a good distance from Abu's dig site. The group hiked a round about way to get to the dome, to avoid detection, and it took them hours to arrive. The dome looked like the back of a mekillot. While it was obviously badly weathered, it was still whole and no entrance could be found.
Vashti began using the way to decay the dome, to make a hole for them, but the dome was proving somewhat resistant to her power. Julius had some better luck softening the dome, but was moving less material that way. They worked together for half an hour, or so, but were finally able to create a hole big enough to squeeze through.


Luckily both moons were out and Shade could see inside the domed building. Far below was a blackened skeleton laying on the ground with a cracked and blackened broadsword laying next to it. It was too dark to see anything more.
Vashti, Julius, Kalino, and Shade climbed down into the dome. There was a geat deal of burned skeletons and charred wooden furniture. They determined that it was a barracks and that the soldiers that were housed here were surprised and killed.
In the middle of the dome was a staircase that lead down. They group thought about investigating, but decided to rest first. They climbed out and decided to keep watch, keeping the dome between themselves and the dig site. Also, to remain undiscovered, they decided not to light a fire. They set their normal watch and went to sleep. 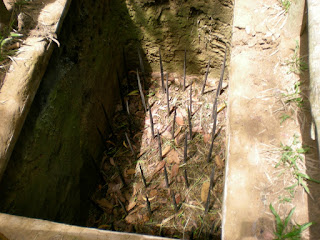 He saw some crates and told the others that the building looked like a small warehouse. The others looked inside and, after seeing the crates, climbed into the building. They immediately raced to the crates and were shocked when the floor fell away, revealing a pit with spikes in it. Luckily, for them, they all managed to jump back in time to avoid the fall.
They moved more cautiously to inspect the crates. Vashti found a crate that was empty, except for two fat mice. She thought about capturing them for food, but decided against it. They still have quite a bit of erdland meat in their kank's pack saddles. The next create she checked had a hornet's nest inside of it and she fled outside to escape them.
Julius opened a crate and found a few sets of nice, colorful draji outfits. Lucky for him, they were all his size. Julius left them behind, he enjoyed his bedraggled appearance. Kalino found two fifty-foot hemp ropes. He took one and Shade took the other. Shade found twelve yards of hemp fabric and took it for Alaxander. Julius looked in the last crate and found three small sacks of wheat. They packed the food and cloth onto their kanks.
They didn't find anything else in the warehouse. Kalino mused that this must have been the home of the muls that had attacked them several days earlier. Vashti commented that she had almost forgotten about them.
Shade had seen a tower poking up from the sand with a sheared top. It wasn't too far away from their current position, but was very far away from Abu and his dig sight. The group thought it was a good idea to check it out.
The tower was badly weathered, but still towered about twenty feet over the groups heads. Luckily, there was a window about eight feet above them. Shade climbed up and poked his head through.
Inside the tower was a rickety staircase that lead down about twenty feet. Shade climbed back down and tied a rope around his waist, just in case the stairway would not hold him. He climbed back inside and gently descended the staircase. The bottom of the tower opened into a dark hallway and room. Shade called out with a whisper that he was safely down.
Vashti decided to got next. She tied a rope around her waist and clumsily climbed into the window opening. She went inside and the staircase held her. She took a few steps forward and felt the stairs beneath her start to give way. She jumped back as the staircase made an awful racket, crashing to the floor below. Shade jumped out of the way of the wreckage.
There was a brief moment of silence as the dust settled. Then, Shade and Vashti were startled as they heard, emerging from the darkness, shrill, inhuman screams.