Session Forty: The Banshee of Yaramuke

Shade peered through the open doorway, his elven heritage granting him excellent night vision. He saw the skinless dwarf and looked into his burning eyes. Shade felt a wave of irrationality take over him. He looked away from the dwarf and saw Julius standing near him. With a shout of fury, Shade pulled his bone alhulak and iron dagger and attacked his startled friend. Kiara screamed.
Just then, the group's half-giant friend, Jessel, wandered into the earth temple. He heard the familar sounds of battle and made his way towards them.
Confused at Shade's behavior, Alaxander peeked through the open doorway and saw the undead dwarf. The burning eyes of the creature caused Alaxander to become infuriated and he turned to attack Vashti with his iron tipped spear.
Julius used the way to become invulnerable to kinetic damage. Unwilling to cause long lasting, physical harm to his friend, Kalino started punching Shade. Vashti was concerned about how her friends were acting, so she peeked inside the open doorway. Unfortunately, she too became enraged, pulled her bone club and attacked her hireling, Abilkisu.


Upon seeing the chaos, Jessel rushed forward and tried to tackle Alaxander. Alaxander was too quick and jumped out of the half-giant's path, while stabbing Vashti with his spear. Vashti swung at Abilkisu, who was doing everything in his power to hold off his employer. Without looking inside, Kalino shut and locked the large stone door. Julius did not want to fool around with niceties, he unsheathed his bone longsword and sliced into Shade's thigh. Shade struck Julius, but his attacks were ineffective against the way.
Jessel tried to grab Alaxander, but Alaxander dodged his attempt. Alaxander then stabbed Vashti again. Vashti ignored the wound and attacked Abilkisu, who was simply trying evade her attacks. Shade's alhuluk and dagger struck Julius, but Julius continued to use the way to protect himself. Julius stabbed Shade again, as Kalino turned and punched Shade with a vicious haymaker. Shade stumbled, but did not fall.
The pummeling and stabbing continued for a few minutes, with Vashti and Shade taking considerable punishment from their friends. Shade's anger subsided first and he dropped his weapons with a look of remorse on his face. Julius channeled his stored up kinetic energy into the ground. Alaxander and Vashti calmed down soon after and were quick to apologize to those they had harmed. Vashti presented Abilkisu with double his normal daily wage for the attack and then magically healed him. Abilkisu accepted her apology.
The locked stone doors rattled a few times, but then went silent. The group retreated to the room with the well. Here, they rested and healed as much as they could.
Shade had obtained the best look at the creature and explained that it was a skinless dwarf. Vashti knew what everyone else suspected, it was a dwarven banshee. She knew a great deal about them, even though she had never seen one in real life. Her water cleric mentor was a dwarf and warned her numerous times about banshees.
Vashti said that only magic or steel could physically harm the banshee. Most elemental spells and most uses of the way would not harm it, it could cause rage in those who look at it during the day, and at night it could wail to cause the same rage in all of those who heard it.Vashti thought it would be best to try and sneak by the banshee, but everyone else resolved to fight it.

They had a magic sword, the obsidian broadsword that they took from the fallen obsidian skeleton, and they could cast spells to enchant wooden clubs to be magical weapons. Jessel could enchant stones for Alaxander to throw with the way and Vashti was pretty sure some abilities with the way would work against the undead creature. In addition, Jessel and Vashti had spells to aid in their combat with the creature. After a lengthy discussion, their plan was compete.
They day was late, so they slept and kept watch.

Jessel and Vashti preached their sermons and everyone had food and water. Kalino helped Shade practice the spear. Julius and Alaxander took long naps and relaxed. Jessel and Vashti discussed elemental philosophy.
They waited until night fall and stuffed their ears with cotton and wax. Vashti and Jessel both cast a protection from evil spell and had the group stay close to them. They approached the door and Vashti blessed the group, which enhanced their combat abilities. Jessel enchanted the stones for Alaxander. The key was turned as Jessel and Vashti enchanted clubs for Abilkisu and Shade. Kalino wielded the obsidian sword and Julius resolved to use the way. They charged inside.
Upon seeing the group charge in, the dwarven banshee wailed. With their ears stuffed with sound dampening materials, the group was able to resist the magic scream. Shade ran forward and struck the banshee with his magical club. Kalino and Abilkisu soon joined him, with Kalino hitting the banshee and Abilkisu missing entirely.
The banshee punched Shade with his fists, causing great harm with its undead enhanced strength. Jessel used a dimension door to move behind the banshee. Vashti summoned her water hammer. Alaxander threw the first magic stone with the way, and struck the banshee in the head. Julius also used the way and caused a chunk of the banshee's side to explode.
The banshee punched Shade again, causing him to reel. Shade struck back, hitting the dwarf with his club again. Kalino cut the banshee and Abilkisu missed again. Jessel cast a healing spell on the undead creature, which caused it great pain. Vashti's water hammer flew forward and struck at the banshee, but missed. Alaxander used the way to throw another stone and struck the banshee again.
The banshee turned around and punched Jessel in the thigh, which gave Jessel quite a large bruise. Shade swung his club, but missed. Kalino was able to cut the banshee for a third time and, for the third time, Abilkisu missed. Vashti missed with her water hammer. Julius blew up another chunk of the banshee's body, the damage being muted because the dwarf was only half present in the material plane. Alaxander used the way to strike the banshee with his last magical stone.
The banshee turned back to Shade, seeing that Shade was looking ragged. He punched the half-elf again and Shade began staggering. He was able to land a blow against the banshee, however. Kalino failed to cut the banshee with the magic sword and Abilkisu failed to strike the banshee with his club. Jessel moved and magically healed Shade. Vashti's water hammer tried to strike the dwarf, but missed again. Vashti moved forward and also magically healed Shade. Out of stones, Alaxander ran to the alter and picked up the large glass eye. 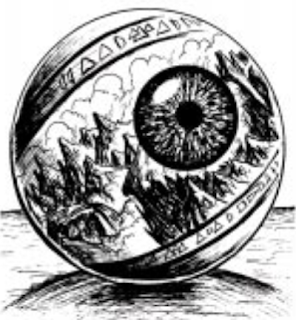 Seeing Alaxander pick up the eye, the dwarven banshee became infuriated and ran to Alaxander. The banshee punched Alaxander in the stomach, but missed his attempted uppercut. Alaxander held onto the eye and teleported to the other side of the room.
Shade, Kalino, and Abilkisu followed the banshee and struck at him again. Shade and Kalino landed their blows.
The banshee turned back to Shade and with two well landed blows, knocked him unconscious. Vashti ran to help Shade, but was unable to reach him. Her water hammer missed the banshee. Jessel used the will to open a dimension door to Alaxander. Julius continued to use the way to blow up small chunks of the dwarf's flesh.
The banshee turned and punched Kalino, which Kalino did not appreciate. Kalino struck back, cutting the dwarf with the magic sword. Abilkisu continued having trouble landing an effective blow. Julius used the way again and blew off a large chunk of the dwarf's left arm. Jessel created some more magical stones for Alaxander and Alaxander started throwing them with the way.
The banshee punched Kalino again, which dazed Kalino for a few seconds, causing Kalino to miss. Abilkisu was feeling useless as another of his strikes failed to effect the banshee. Vashti's water hammer missed again. Vashti magically healed Shade, but Shade did not regain consciousness. Jessel moved toward Shade, but he couldn't quite reach him. Julius saw no reason to change his tactics and blew off part of the dwarf's stomach with the way. Alaxander threw a rock with the way and it struck the banshee in his eye.
The banshee punched Kalino again, but Kalino was able to cut the banshee this time. Vashti magically healed Shade and Shade wearily opened his eyes. Abilkisu tried to hit the banshee, but missed once again. Julius continued his assault with the way and blew the dwarf's left arm off. Jessel was able to reach Shade and magically heal him further. Alaxander threw another stone with the way and it impacted the banshee's other eye. The magical stone punched clean threw the dwarf's skull.
The dwarven banshee fell to his knees and as he fell, he crumbled to dust. Most of he group looked on in near unbelief, they had defeated their foe. Julius smiled, because he had never doubted their victory.