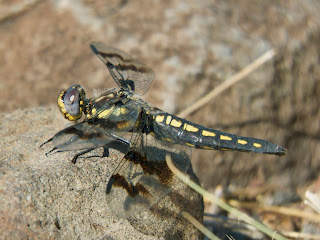 
Giant dragonflies, like their smaller counterparts, are swift and deadly aerial hunters. While their smaller cousins are generally beneficial, the giant variety is a dangerous predator that attacks any creature its size or smaller.

Adult giant dragonflies are famous for their brilliant metallic colors; common hues are green, blue, and gold. Striped and spotted individuals are common as well. All adult giant dragonflies have two identical pairs of transparent wings that show dark veins in an sparkling amber membrane. A dragonfly’s six legs are long and delicate, so the insect can at best balance lightly on a tree branch or other perch. The legs are tightly bunched where they join the body, but spread out at angles so the dragonfly can clench them together to form a large basket.
Giant silt dragonflies have been magically altered, some say corrupted, by silt clerics. Giant silt dragonflies behave as their natural counterparts, but are larger and have some divine spells at their disposal. They will never knowingly attack a silt cleric and have been known to allow silt clerics to use them as mounts.
Combat
A giant dragonfly’s four wings enable it to hover and to dart with blinding speed. They gain a -3 bonus to all initiative rolls; if they win initiative, they can dart into melee and zip out of range before their opponents can make return melee attacks. A darting dragonfly also can avoid missile attacks. When a giant dragonfly has initiative, missile attacks directed against it suffer a -4 penalty. Even when the dragonfly loses initiative, missile attacks against it suffer a -2 penalty. When attacking creatures of tiny or small size, a dragonfly scoops its victim into its leg basket and devours it in midair. Once caught in the basket, the creature automatically suffers bite damage each round until completely devoured. When attacking larger creatures, a dragonfly darts in to bite with its mandibles.
Silt Dragonflies have been imbued with a silt breath weapon usable every 1d6 rounds. The silt breath is a line of silt that flays the skin and other soft tissues from their victims. This line starts at the giant silt dragonflies head and extends twenty feet. Every target within this range suffers 3d6+2, but may make a saving throw vs breath weapon to take half damage. Silt dragonfly larvae do not have a breath weapon.
Habitat/ Society
Since they tend to attack and devour anything they see, giant dragonflies do not form organized groups. Nevertheless, several of them hunting in the same general area may attempt massed attacks against less agile opponents. After such a gang attack, however, any crippled dragonflies are likely to become the next victims.
Ecology
Giant dragonflies mate and breed on the wing and near their preferred hunting area. However, they are strong fliers and often are encountered away from these areas. Generally, they prey on other flying giant insects, but they take warm-blooded prey when they can get it. Giant dragonflies cannot tolerate freezing temperatures. In forests, giant dragonflies tend to be even bigger. These larger specimens use the statistics in parentheses.
Giant dragonfly eggs hatch in 12-20 days. Once hatched, a dragonfly remains in larval form for about a year.
A giant dragonfly’s wings have no innate value, but are prized by nobles and other wealthy individuals for decoration. A well-preserved dragonfly wing can be sold for 100cp in most city-states. Giant adult dragonflies provide a quarter-pound of armor grade and a half-pound of standard chitin for every two feet of body length.
Larvae
Dragonfly larvae are every bit as voracious as the adults, but they are flightless and bound to their environment. They are poor swimmers, however. Instead they lurk on the bottoms of their environment and wait to ambush prey. Their abdomens are equipped with organs that can expel a powerful jet of water, or silt, once every two rounds. When jetting out of cover to the attack, they surprises victims 50% of the time. Dragonfly larvae are armed with mandibles even more formidable than those of adults. Furthermore, these mandibles are covered by a rubbery, lip-like organ when not in use; so even if the larvae is spotted before the attack, it often appears to be an inoffensive, toothless creature.
Posted by Rajaat99 at 4:00 AM