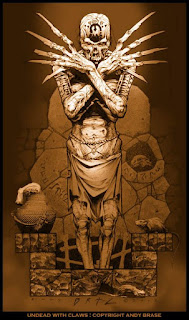 Clawed Horror
Clawed horrors are monsters who are infected with a disease. They are alive, but rotting and are often mistaken for undead. The disease causes their hands to deform into wickedly long eight inch claws and causes their skin to rot. The rotting puts them in constant pain. This torture slowly twists their alignment toward evil.

Combat
Clawed horrors are straight forward combatants, but they fight intelligently. They attack with their two claws, doing 2d4 damage with each claw. They prefer to flank opponents and attack from the rear. They will use their flying ability and superior speed to their advantage.

Habitat/Society
Clawed horrors spread their disease by tricking humans and demi-humans into drinking their blood. They do this by diluting their blood in water and then putting it in waterskins or jugs  for others to find. When the blood is ingested, the human or demi-human must save vs poison or contract the disease.
One diseased, the human or demi-human begins to change in 24 hours. At this point, a cure disease spell must be cast in 1d4 days, or the victim will change into a clawed horror at the end of that time.
It is unknown why clawed horrors choose to reproduce, except to spread the misery of their existence.
Creatures who are normally immune to disease are not always immune to the disease of the clawed horror. The clawed horror disease still has a 20% chance of infecting disease immune individuals. Some creatures, such as dragons, may always be immune, at the dungeon master's discretion.

Ecology
As diseased monsters, the clawed horror has no natural place in the ecology of Athas.