Players may want to play an outcast yuan-ti. This is possible, but only as a assuddha (pureblood). An assuddha can pass for human 80% of the time. They only have slight differences from true humans, such as slit eyes, a forked tongue, or maybe even small fangs. 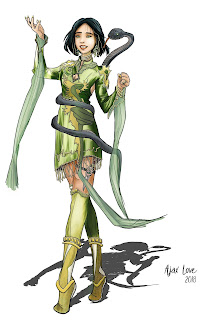 Yuan-ti assuddha are made just like any other character using the following modifications.
Racial Ability Requirements: Strength 5/20, Dexterity 5/20, Constitution 5/20, Intelligence 10/20, Wisdom 5/20, Charisma 7/20.
Racial Ability Adjustments: +1 Dexterity, -2 Constitution, +2 Intelligence, -1 Wisdom
Assuddha have fast reflexes, which grants then a  natural armor class of 9 in non-surprise situations.
Assuddha are medium sized creatures.
Class Restrictions and Level Limits: Fighter 16, Gladiator N/A, Ranger N/A, Defiler 12, Preserver 10, Air Cleric 8, Earth Cleric 14, Fire Cleric 12, Water Cleric 8, Druid 10, Bard N/A, Thief 12, Trader 12, Psionicist Unlimited.
All yuan-ti start with their own language and one other of their choice.
If a yuan-ti rolls animal affinity for their wild talent, they automatically get snake, giant as the affine animal.
Height and weight should be rolled on the human chart.
Starting age has a base of 50 with a variable of 2d10.
Maximum age has a base of 400 with a variable of 5d20.
Middle Age for a yuan-ti assuddha is 200. Old Age is 300 and venerable is 400.

Assuddha do not give off an odor that humans can detect. However, animals will detect a dry, musty smell on them. Assuddha have a -2 penalty to all proficiency checks with dealing with non-reptilian animals. Assuddha can speak to snakes, but have no control over them in any way.
Assuddha have a +1 save throw bonus to avoid the effects of non-magical poisons. However, their reptilian nature makes them slightly slow and sluggish in cold areas, like night in the desert, and they add +1 to their initiative rolls in areas of cold.