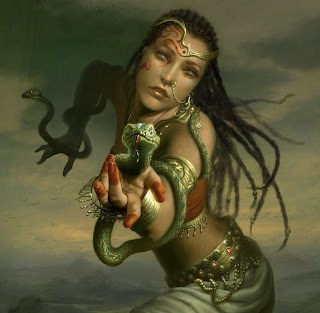 Assuddha can pass for human 80% of the time. It has only slight differences from true humans, such as slit eyes, a forked tongue, maybe even small fangs. Assuddha do not give off an odor that humans can detect. However, animals will detect a dry, musty smell on them.
Combat
Ssapha fight as their training, intelligence, and leaders dictate. They prefer ambushes to direct confrontation. In a mixed group, the Ssapha will send the phohora to soften up the enemy before committing themselves to combat. The group leader may order particular members forward before others if it provides for a better strategy.
Assuddha always use weapons or other items, preferring, but not limiting themselves to weapons with an edge. They also use poison, if available. Assuddha have a +1 save throw bonus to avoid the effects of non-magical poisons. However, their reptilian nature makes them slightly slow and sluggish in cold areas, like night in the desert, and they add +1 to their initiative rolls in areas of cold.

Habitat/Society
Assuddha are generally evil.. They believe the yuan-ti are above the other races. Assuddha speak the yuan-ti language. They can also speak with any snake or snakelike creature. Assuddha are considered lesser than the Ssuddha and the ssapha, but they are extremely important as hatyara and jassussa.

Ecology
Assuddha are carnivorous, eating any warm-blooded creature they can catch. They have a special taste for birds and human flesh. They keep flocks of erdlus and kitsus for feeding on. Assuddha can live for up to five hundred years.