It was pointed out to me by Rovewin of Athas.org, that purple scorpions are mentioned in the Revised Dark Sun setting book. However, they are not drawn up in any of the books. So, in an effort to rectify the situation, I have created a purple scorpion below. 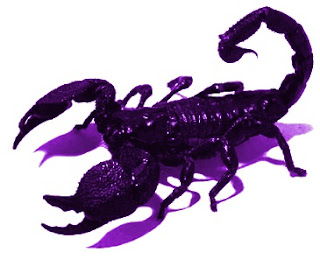 Combat
Purple scorpions are very aggressive and will attack any creature that approaches it, or its lair, except the dragon. The creature has a thick, hard, chitinous carapace that gives it Armor Class 2. This monster attacks by grabbing prey with its two pincers, inflicting 1-8 points of damage each, while it lashes forward with its tail to sting. Thus, it can fight three opponents at once. The sting inflicts 1-4 points of damage and the victim must save versus poison or take 4d6 points of damage. If the victim makes a successful save, they only take 2d6 damage.
If a purple scorpion manages to grab a victim in a pincer, it will automatically inflict 1-8 points of damage each round until it releases the victim. The victim has one chance per round to escape. If they can make a bend bars/lift gates roll, they will escape the claw. However, this can be the character's only action that round. If the sting is employed against an untrapped victim, an attack roll is required for a successful attack, but a trapped character is automatically struck by any sting attack directed at him with no attack roll required.
Purple scorpions have a psionic ability which allows them to regenerate. They heal 1d4 points of damage every round, until slain.
Note that scorpions are not immune to their own poison. If a scorpion is reduced to 1 or 2 hit points, it will go into a stinging frenzy, stinging everything in sight, gaining two attempts to hit per round with only the tail. Slain creatures are dragged to the scorpion’s burrow to be eaten.

Habitat/Society
Purple scorpions live in dens dug into on near the salt flats. Each lair may (10%) have 3d4 scorpion eggs. These beasts eat any living creature that is unfortunate enough to stray too close to their lair. Any treasure found comes from the bodies of human or demihuman victims that have been dragged here to be consumed. Armor is rarely found intact, since the scorpion will surely have used its pincers to cut up its prey.
Purple scorpions mate during high sun and may encountered in pairs during that time of the year.

Ecology
These arachnids contribute to the ecosystem by feeding, usually, on insects. Alchemists and assassins prize the scorpion’s venom because of its potency.