Session Thirty One: On Athas, Plants Eat You 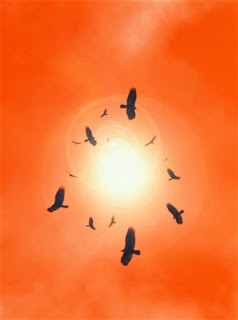 After burying Spike, the group trudged on. They were all severely wounded, but they didn't have much choice. They were close to Urik and had to press on.
Vashti had gathered the fallen ambushers money and bone broadswords. Khalil recognized the ceramics as Draji coins. He explained, weakly, that House Tsalaxa was based in Draj. Vashti asked if the men were hired by House Tsalaxa and Khalil said it was likely, but that they couldn't prove it.
Vultures descended on the battlefield after they left and a few trailed the caravan for a couple of hours. When it was obvious that no one else was going to drop dead, the vultures left the area. The group was happy to see them go.
They stumbled on for hours in silence, Khalil being too exhausted to talk, and nothing bothered the caravan. The entire caravan was thankful, as there were so many injured they didn't know how good of a defense they could muster. As the caravan leaders handed out the evening rations, they praised the guards for saving the caravan. The group ate in silence and quickly went to bed, except for Julius, who took the first watch.

The second watch was taken by Shade, who was still mourning the loss of his friend. He walked the perimeter of their camp, looking out over the barren landscape for threats. He suddenly got the feeling that something was watching him. He used the will to heighten his senses.
He knew what was happening, a nearby cactus was shooting its spines at him. As he looked, one of the spines stabbed him in the leg. It didn't hurt too bad, but then it shot several more. Shade let out a yell that woke the group. He tried to attack the cactus with his alhulak, but flailed around wildly.
Alaxander rose and grabbed his bone club, but couldn't see what was attacking them. Julius looked at the yelling and flailing Shade and reluctantly rose. Vashti and Kalino grabbed their weapons and jumped up. They were all confused, as they couldn't see what was attacking them. 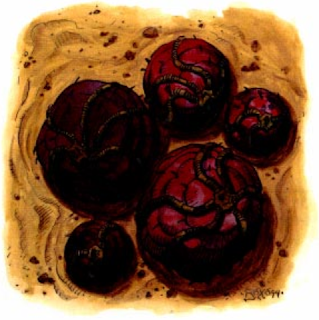 Shade yelled that the cactus was attacking him and he tried to move away from it, but the cactus' spines had tethered it to him, so it followed him. Vashti recognized it as a rock cactus and told the party. She hit it with her club, which did little to harm the plant. Alaxander attacked it with the way, heating up the cactus from within, while Shade tried to strike at it with his alhulak again. He missed. Julius shook his head and laid back down to sleep. The cactus shot more spines into Shade and pulled water from his body. In his weakened state, Shade couldn't handle it and collapsed unconscious. Kalino walked over to the rock cactus and sliced it in half with his chitin khopesh. Vashti told him that the flesh of the cactus was edible, so Kalino harvested it.
The group returned to bed, with Vashti taking the rest of Shade's watch. Kalino said he would watch an extra shift, as Vashti needed to sleep to regain her spells. They slept peacefully until Alaxander's watch, hours later.
Alaxander saw a gaunt human man, dressed only in a loincloth, trying to look into House Wavir's wagon. Alaxander tried to grab the man, but the man pushed him away and yelled a panicked scream. Alaxander realized that attacking the man was a mistake, as the man raised a rock threateningly. Alaxadner then showed his empty hands to man and backed off. He tried to speak to him, but the man didn't seem to understand.
The group was awakened for the second time that night and Julius murmured grumpily. Vashti and Kalino got up and saw the man. They guessed that he was an escaped slave. Vashti tried to talked to him, but the man did not seem to understand. Kalino tried next, but again the man did not understand. They could observe the that man was starving and dehydrated. Vashti gave him her full waterskin and Alaxander gave him food. Vashti warned not to give him too much, as he could get sick.
The man ate and drank quickly, watching the group warily the whole time. Vashti gave him her sandals and Alaxander, his old cloak. Kalino gave him a bone broadsword and Shade's leather breastplate, which was an extra breastplate Shade carried. Vashti filled the empty waterskin and gave it back to the man, along with three pounds of meat in a improvised sack.
The man was surprised by the group's kindness and saluted them. They saluted back and backed away from him, allowing the man to leave in peace. The man hurried off southward, away from Urik.

In the morning, Vashti preached her sermon. With her healing magic, she was able to pull the group from death's door. They were far from completely healed, however. They ate and Khalil was still too injured to talk much.
The group shuffled along and the morning past in a haze of monotony. The group didn't mind though. They stopped for high sun, as normal, and Kalino tried to get a little more sleep in the shade of a wagon.
During one of the afternoon breaks Vashti was behind some rocks relieving herself. She suddenly felt a sharp stab in her backside. She tried to scream, but discovered she was paralyzed. A cactus had jabbed her with a tethered needle. The cactus then stuck her with two more needles and dragged her to it. It impaled her onto a large thorn and began to pull the moisture from her body. 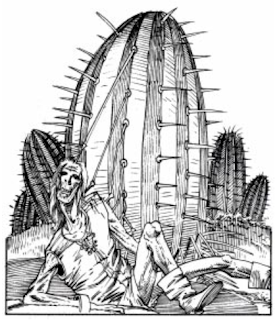 Vashti kept trying to scream, but the paralyzation was preventing it. The rest of the group was chatting leisurely by the wagon. They were both nervous and excited to reach a new city-state. They wondered about the culture and how different it would be from Tyr and Balic.
The paralyzation effect faded from Vashti and she was finally about to let out a croaking yell. The group immediately ran to investigate. Upon seeing Vashti impaled on the cactus, Shade rushed to attack it with his obsidian alhulak and iron dagger. He missed. Alaxander punched the cactus with the way. Julius used the way to shoot electricity at the cactus. The cactus shot needles at Shade and paralyzed him. Kalino saw Shade fall and decided to throw his iron spear, which struck the cactus with a glancing blow. Khalil jumped onto the highest rock and, while a striking heroic pose, fired two bone-tipped arrows cleanly into the flesh of the cactus.
Alaxander used the way again to strike the cactus. Julius kept shooting electricity with the way and began cooking the cactus from within as well. Shade was pulled onto a large thorn and impaled. Shade fell unconcious as the cactus  began siphoning the water from his body. Kalino threw his bone dagger, which struck the cactus cleanly, and Khalil impaled it with another arrow. Vashti felt the cactus drop her.
Julius kept using the way to damage the plant, as did Alaxander. Vashti crawled away and said she thought it was dead. Julius kept using the way for a few more moments, just to make sure it was dead. Vashti drained her water skin and told Kalino that she knew that this cactus had an edible honey-like substance inside of it.
Kalino harvested the nectar. Vashti healed Shade just enough to get him onto his feet. The group was really hurting and hoped they would reach Urik soon. 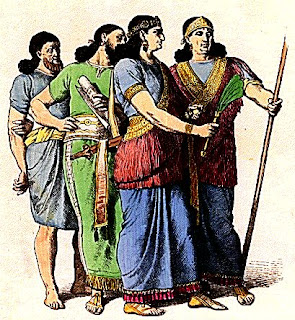 An hour later, they could see Urik and an hour after that, they arrived at its gates. The walls of Urik were more imposing than those of Tyr, with obsidian spikes atop it. The walls also seemed to be better maintained than the walls of Tyr. The gates were made of agafari wood, embedded with obsidian spikes. It all looked very imposing.
House Wavir paid for the group to enter the city and paid them for the journey. They got a bonus for hazard pay.
Khalil cautioned the group to stay in the merchant area and stay away from the templars. He then went to a tavern, called the Blue Kank, to self-medicate his pain. Kalino, after giving Shade thirty bits to pay for his leather breastplate, followed Khalil into the Blue Kank. Vashti joined them. Julius went to find an armorer to repair his damaged armor. Alaxander went to the armorer as well to get a new set of brigandine armor, with a custom pattern on the outside. Shade followed and got a new leather breastplate, before going to the Blue Kank for dinner.
Kalino, Shade, and Vashti were happy to have a fresh-cooked meal. Kalino and Vashti talked about hiring Khalil to travel with them, but decided they couldn't afford nine bits per day. Julius stabled the kanks and paid and extra bit to sleep in the stable with them. Alaxander and Shade paid to sleep in the inn's common room. Vashti and Kalino paid extra for individual rooms. They all slept without any interruptions.

The group awoke and congregated in the inn's common room. Vashti preached a sermon and surprised some onlookers, when she created water from nothing. The group ate and then Vashti used her magic to heal the group a little more.
Alaxander and Kalino left the inn and went to the marketplace to buy some cooking tools, vegetables, and beans. Vashti went shopping for things to give away, just in case they came upon another escaped slave. Shade was mourning Spike and recovering, by lazily laying around the inn. Julius took the opportunity to craft a bone shortsword, but was unable to track down a buyer for it.
The group met in the common room of the Blue Kank that night, to decide what to do next.