Vashti was doing her best, holding back the jankz. Most of them milled about the cave entrance, but some rushed past her. They immediately climbed on top of the kank's pack saddles and began tearing at the bags. The bags contained the group's meat.
Seeing this, Vashti grabbed some of the meat to lure the jankz to the outside of the cave. She fumbled with the meat and one of the jankz jumped to to grab the meat and scratched her right arm in the process, enveonomating her with it's spur. Vashti collapsed to the ground and screamed uncontrollably, as her arm began to wither. Kiara said she could help her, but she needed to get her outside, where the herbs to help her would be. Shade scooped up Vashti and took her outside. Once outside, Kiara suggested Shade return to his friends, so he did.
Kiara managed to greatly reduce Vashti's pain and informed her that she had slowed the venom, but not stopped it. Vashti was grateful for the pain relief, even though she and Kiara knew that Vashti's arm would be useless for a day or two.
Shade used his ability to speak with animals and started talking to the jankz. The jankz were unintelligent creatures and Shade had to speak simply to them. The jankz cried about their hunger and lamented that some of their cubs had died of starvation.

Shade gathered twenty-one and half pounds of meat and told the jankz to lead him to their burrow. Their burrow was not far and Shade dropped little chunks of meat along the way. Once he arrived, he began dropping the chunks of meat into the burrow holes. The jankz scurried into their burrows, chasing the meat. They did not return.
After depositing the rest of the meat. Shade returned to the cave. He told Vashti to sleep and he would take the rest of her watch. Vashti was grateful, but slept fitfully.

As Kiara and Vashti had predicted, Vashti's arm was shriveled and useless the next morning. Alaxander helped Vashti pack, while she preached her morning sermon. After feeding and watering themselves, they set out east.
A little over an hour later, they smelled a sickly sweet smell on the hot breeze. Forty minutes later, they came upon a mekillot carcass, rotting in the sun. It was clear, from the blisters and boils on its exposed skin, that it had drunk from the black waters.
A couple of hours later, the group saw a small pool of black water a couple of hundred yards off the road. A tiny south flowing stream fed the small pool. Vashti wanted to collect a sample for analysis, so she took out her wooden mug and bent over to collect a sample. 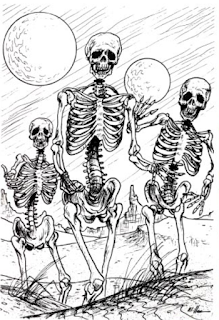 Suddenly, a skeletal hand shot up from the sand and hit the mug out of Vashti's hand. All around the small pool, the bones of the dead rose up in an unnatural semblance of life. Kalino, Julius, and Abilkisu were not surprised, but everyone else was.
The skeleton in front of Vashti pushed her away from the water, while another skeleton attacked the one who had pushed her. The other skeletons spread out to attack the party, scratching their bony fingers on everyone's exposed flesh. Strangely, another one of the skeletons started attacking the others.
The skeletons scored a few good hits, but were no match for the group. Alaxander used the way to destroy the skeletons easily,  Vashti used her priestly powers to drive some of them away, Kalino, Shade, and Julius didn't struggle much either.They all thought it was weird that some of the skeletons attacked each other, but had no way to finding out why.
Having no clues to follow, the group moved upstream until the sun set and then they set up camp tens of yards away from the black stream. Julius decided to take the first watch, which was becoming the usual routine.
As Julius was keeping watch, he heard something large moving over the stones toward their camp. He was about to call out, when he noticed it was a half-giant. He whispered for the half-giant to identify himself. It was Jessel and Julius was relieved. Jessel told them that a group of humans told him which way they had gone and that the group had saved them. Julius answered that it was all true. Their light talking woke up Shade, who was also happy to see Jessel.
After about ten minutes of talking, the ground near the black stream parted and more skeletons dug their way up. Julius began yelling to wake up the rest of the group.
The skeletons were quick to attack the characters, especially the ones who were slow in waking. Jessel proclaimed loudly that he did not bring the skeletons with him. Vashti was quick to force a group of four skeletons to flee. Julius tried to use the way, but was having difficulty concentrating. Alaxander, again, used the way to mentally punch the skeletons to great effect. Kalino used his chitin khopesh and Shade used his bone alhulak and iron dagger. Jessel didn't try to make the skeletons flee, he just used his large stone morning star, but missed.
Even with Jessel reacting poorly, the skeletons were no match for the group. The skeletons did get some good strikes on their living foes, but the living were much more skilled than the dead.
The group continued their normal watch rotation and the night passed without further interruption.

In the morning, Vashti could use her arm again, but it was painful and stiff. Vashti preached her morning sermon and the group fed and watered themselves. They were able to find some water among the rocks and stones that was not tainted. 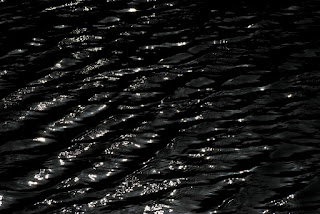 After her sermon, Vashti decided to speak with the black waters. She leaned close and cast a spell that allowed her to speak to it. The water had a raspy and unhealthy sounding voice. It told her that it was poisoned by "The dead that dwells within us."
Vashti also discovered that, if separated from the whole, she could use her magic to purify small amounts of the black water. This revelation excited Vashti, because she knew that somehow the water could be healed. They finished packing and continued walking.
Just before high sun, the group heard the sound of stone striking stone. They sent Shade to investigate. Shade moved as quietly as he could and peered around the large boulders.
Below, he could see a large group of men and zombies digging in the sand and breaking up rocks with stone picks. There were ditches that had been dug and some ruins uncovered. The overseers whipped the men working slowly and others commanded groups to clear a new area.
Shade saw a black cassocked figure directing the overseers. The figure was squat, but broad. Shade recognized Abu immediately.