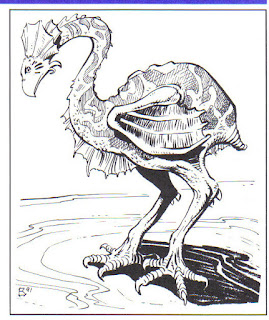 Two erdland were strolling happily on the rocky steeps of a mountain valley. They happened to meet with a chasm between them. The chasm was deep and filled with jagged, sharp rocks. The trunk of a dead tree formed a bridge over the chasm, but it was so narrow, not even two critics could have passed each other safely. The narrow path would have made the bravest tremble. But not our two erdland. Their pride would not permit either to stand aside for the other.
One set her foot on the log. The other did likewise. In the middle they met beak to beak. Neither would give way, and so they both fell. Scavengers fed on their corpses below.
Posted by Rajaat99 at 5:00 AM