Giant centipedes are loathsome, crawling arthropods that arouse almost universal disgust from all intelligent creatures (even other monsters). They are endemic to most regions. One of the things that makes the centipede so repulsive is its resemblance to the worm. Its long body is divided into many segments from which protrude many tiny feet. Hence the name “centipede” (or hundred-footed). The giant centipede is so named because it is over 1-foot long. The body is plated with a chitinous shell and it moves with a slight undulating motion. The creature has the added benefit of protective coloration, and varies in color depending on the terrain it inhabits. Those that favor rocky areas are gray, those that live underground are black, while centipedes of the forest are brown or red.

Combat
When hunting, centipedes use their natural coloration to remain unseen until they can drop on their prey from above or crawl out of hiding in pursuit of food. They attack by biting their foes and injecting a paralytic venom. The venom can paralyze a victim for 2d6 hours, but is so weak that victims are permitted a +4 bonus to their saving throw vs poison. Due to its small size, the giant centipede is less likely to resist attacks and receives a -1 penalty to all its saving throws.
Although a single giant centipede rarely constitutes a serious threat to a man, these creatures frequently travel in groups. When more than one centipede is encountered, the monsters will fight independently, even to the point of fighting among themselves over fallen victims.

Habitat/ Society
The centipede behaves like most other insects, roving from place to place in search of food; it has no set territory or dwelling. The centipede simply goes where its hunger leads it. It is an aggressive and hungry carnivore that must eat at least once a day to survive. Hungry centipedes often resort to cannibalism.

Ecology
Giant centipedes have several natural advantages, including poison and protective coloration, allowing them to compete with other small predators for game. Their venom bestows a certain immunity from being hunted, but hungry and skilled animals and large predatory birds hunt them effectively in lean times. Their preferred targets are small mammals and reptiles that are easily overcome by their weak venom. If they are very hungry, however, they have been known to attack anything that moves, including humans.

Huge Centipede
These are identical to giant centipedes save that they are only 6 inches long. Their venom is weaker than that of their larger cousins and a failed +4 saving throw will immobilize the victim for only 1d6 hours. Huge centipedes make their own saving throws at -2. Mice and other large insects are the favorite prey of huge centipedes. They in turn are hunted by giant centipedes.

The megalo-centipede, because of its great size, is no longer classed as an irritant but is a threat to human and animal alike. Its acidic poison is far more potent than that of its weaker cousins. The victims of a megalo-centipede bite receive no bonuses on their saving throws and failure indicates death. If the target successfully resists the poison, the acid burns the victim’s skin, inflicting 2d4 points of damage.
The megalo-centipede is more intelligent than its smaller cousins and it is a far more cunning hunter, although they still do not cooperate with each other. In the wilderness the megalo-centipede prey on animals the size of erdlu. In the subterranean environment, it attacks man-sized or smaller creatures, including dwarves, humans, and gith. The megalo-centipede receives no penalties to its own saving throws.

This cousin of the giant centipede feeds upon and lays its eggs in carrion. A tunnel worm attacks by lunging out of its hidden burrow to strike with a +2 bonus to the attack roll. Success indicates the tunnel worm has seized its prey in its mandibles, but no damage is inflicted until the worm chews through the victim’s armor. It takes one round for the worm to chew through AC 2 or worse armor, two rounds for armor tougher than that but no tougher than AC 5 and three rounds for armor tougher than AC 5. Once the armor is breached, the worm automatically inflicts 2d8 points of damage each round. If the worm suffers 15 or more points of fire damage or loses 60% of its hit points, it drops its victim and retreats to its lair. Tunnel worm lairs often have treasure from earlier victims. 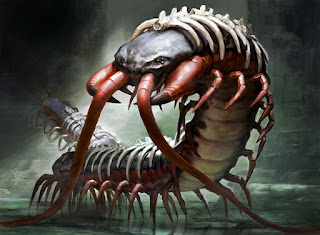