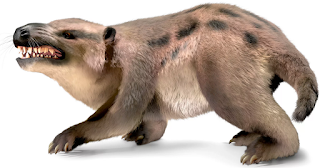 Fa'kabir
The fa'kabir is a large, broad, ferocious rodent common to the Tablelands. Its furred body is brown with black spots. Unlike mice and rats, the fa'kabir has a short tail covered in fur.
Combat
Fa'kabir are known to attack without provication, clawing for 1d4 points of damage and biting for 1d6 points of damage. In addition, fa'kabir can use the following psionic powers.
Psionic Summary
Level: 2
Dis/Sci/Dev: 2/1/5
Attack/Defense: EW, II/ M-
Score: 16
PSPs: 18
Psychometabolic: Biofeedback
Telepathy: Mindlink, Contact, Ego Whip, Id Insinuation, Inflict Pain

Habitat/Society
Male fa'kabir are slightly larger than females. Males fight each other, during high sun, for the right to mate with local females. They are the most ferocious during this time.
Females are territorial and drive away all other fa'kabir, unless it is mating season. Fa'kabir live in underground burrows. Females raise their young until they are fully grown for a full season, at which time the female drives the young fa'kabirs away.
Young fa'kabir are born with 1/2 HD and gain 1/2 die at the end of their first year. They gain 1 HD after six months of additional life, untill they are at their full 4 HD. Their psionics develop after their second year of life.

Ecology
Fa'kabir form an important place in the ecology of Athas. Fa'kabir eat carrion, and hunt creatures its size, or smaller. They are then hunted by predators larger than themselves.
It is very uncommon to find fa'kabir meat for sale, as their meat is very similar to a rat, and rats are far easier to kill. However, if a mad man decides to hunt a fa'kabir for food, it will provide thirteen pounds of edible meat.