Into the City State

The line into Nibenay was long. The music continued to play and everyone swayed to the tune. After an hour, the group finally reached the gates. They were nervous, Aziza is an escaped slave from Nibenay. The gate guard asked them their business and had them pay two bits per leg to get inside the gates.
The sights of Nibenay overwhelmed Ren, who had never been to a city before, and he stared blankly at the carvings and colorful clothing of the city. Seeing an attractive topless Templar caused him to blush. Yaotl pushed Ren along, not wanting to attract attention.
Cyrus saw all the krama wearing Nibnese and noticed the strange looks he, and his companions, were receiving. A merchant called out to them that the look like outsiders, because of their clothing. Cyrus, Ren, and Aziza bought some new clothes, including kramas of their own. Yaotl simply bartered for a new pair of boots and new clothes for Basheera. Cyrus insisted on buying expensive clothes, snake skin boots, a embroidered linen shirt, and high quality breeches. He noticed that Nibnese attitudes, toward him, changed for the better.

Although our Dark Sun game normally falls on Sunday, we decided to cancel it for Mother's Day. 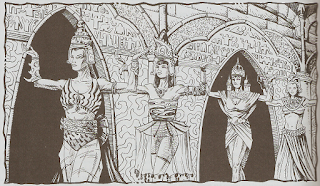