Session Thirty-Eight: The Dead of Yaramuke

Suddenly, a seven foot long, six-limbed creature ran from the darkness and leapt to attack Shade. It stabbed him with its two middle limbs, that resembled short sword blades, and attempted to bite him. Vashti screamed. She knew they were undead.
Another one of the undead monsters rushed from the darkness and leapt to stab Vashti. It grabbed Vashti and tried to pull her down, but Vashti managed to shove the creature away. Vashti tried to force the undead away, by calling upon her patron element, but it seemed to have no effect. Shade was stabbed again by another of the monsters. Shade ran up the stairs and shot the creature attacking him with arrows fired from his short bow. Kalino crawled into the tower and ran to assist Shade, who now had two of the undead attacking him. One of the monsters fell into the sunlight and its flesh bubbled and burned. Julius peeked inside the window enough to throw a rock using the way.
Vashti yelled that they were undead and then she inwardly mumbled that she didn't know anything else about them. Julius thought about using detonate to collapse the tower, but didn't want to bury his companions, or alert Abu's digging team. So, he threw another rock. Vashti summoned a water hammer to attack on her behalf. Abilkisu climbed into the window and started shooting the undead attacking Vashti. The group noticed that the undead were making small screams before every attack. Shade was wounded badly by the undead and he fell from the stairs and was knocked unconscious. Kalino lept from the stairs and slashed wildly with his chitin khopesh.
Vashti moved further down the rickety staircase and Abilkisu followed her. They both attacked the undead monster who was attacking Vashti. One of the undead grabbed Shade and dragged him into the darkness. One of the undead turned away from Shade and began attacking Kalino. Kalino fought back and shouted that Shade had been dragged off. Kiara screamed. Julius used the way to detonate the wall around the window opening. The wall exploded, flooding the tower with sunlight. Two of the undead were caught in the light and their flesh burned and smoked.

As my players were investigating the ruins of Yaramuke, I wanted an undead monster that was unknown to them and creepy. I created the screaming dead specifically to end a session with their inhuman shrills.
I found this image and thought they looked sufficiently creepy and violent and they'd fit well in the Dark Sun setting. This image is why I chose to make them blind, among other details.
If you have players that know all of the monsters in the manuals, throw some of these at them for some new thrills.

The screaming dead are unique six-limbed undead monsters that reside in the ruins of Yaramuke. The magic that was used in the attack and defense of the city warped areas of Yaramuke and spontaneously gave rise these twisted undead monsters.
Screaming dead are blind, but have enhanced senses of hearing and smell. They despise sunlight and stay in dark areas of the ruins until nightfall. A lair may be discovered by finding skeletal husks near it. 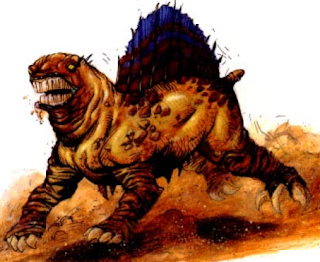 One morning, a jhakar was hunting near the edge of the scrub lands, his mouth salivating at the thought of a tasty meal. He watched the mice run through the brush, drinking the meager dew from the grasses.
"Those mice are too small," he complained, "I need something fatter to fill my belly."
Then, a rat ran near him that he could have easily caught.
"No thanks," scoffed the jhakar, "I wouldn't even open my mouth for anything so filthy."
As the sun rose, the mice and rats returned to their cool burrows and the jhakar found nothing else to eat. He continued to hunt, but soon found himself too weak. As the sun reached its pinnacle, the jhakar collapsed from hunger and died.

The cave fisher is a large insectoid that has adapted to life below ground.
The cave fisher has a hard, chitinous shell of overlapping plates and eight legs. The 6 rear legs are used for movement and traction on stony walls and corridors. Because of these limbs, the fisher has no difficulty in moving up and down vertical walls. The front pair of legs are equipped with powerful pincers, which are used for killing and dismembering prey. The most unusual feature of the cave fisher is its long snout, which can fire a strong, adhesive filament. The monster can also use its adhesive to anchor itself in place on walls and ledges.

Session Thirty-Seven: The Ruins of Yaramuke

As Shade was peeking over the short ridge, Jessel got a lost look in his eye. The other members of the group knew that look well. He apologized and said earth was summoning him. He opened a dimension door, with the will, and stepped through. Vashti lamented that water never summoned her. Kalino reassured Vashti that it was, perhaps, because Vashti didn't need as much guidance as Jessel.
Shade watched the zombies and slaves dig in the sand, uncovering the ancient ruins of Yaramuke. He used the will to improve his senses and could hear the overseers yelling at the slaves below them. Abu was asking one of the overseers about clues to the palaces location. Shade believed he heard all he needed to and took a quick look out over the horizon. He saw more ruins jutting up from the sand.
Once Shade returned to the group, he informed them of what he saw and heard. The group discussed the possibility of attacking Abu's group, but thought better of it. They decided instead to begin their own investigation of the ruins.
They chose to inspect a dome Shade saw in the center of the ruins that was a good distance from Abu's dig site. The group hiked a round about way to get to the dome, to avoid detection, and it took them hours to arrive. The dome looked like the back of a mekillot. While it was obviously badly weathered, it was still whole and no entrance could be found.
Vashti began using the way to decay the dome, to make a hole for them, but the dome was proving somewhat resistant to her power. Julius had some better luck softening the dome, but was moving less material that way. They worked together for half an hour, or so, but were finally able to create a hole big enough to squeeze through. 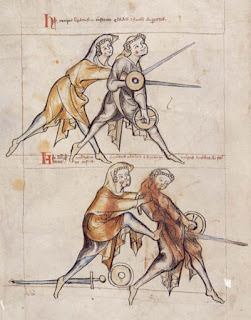 I made a simple combat option cheat sheet from the information provided in the Player's Option: Combat & Tactics book. In my experience, having a cheat sheet will remind the players of the possible maneuvers and make combat more interesting.

You can view the google doc here or here.

I hope that this is useful for your game. May you always find water and shade. 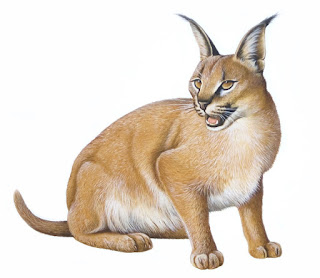 
Great cats are very efficient predators and have adapted to many different environments.

Imagine, your character is keeping watch while the rest of the party sleeps. You hear a noise and stare intently into the darkness to see what made it. You ask the DM, "How much light is there?" And the DM gets a look on his face like he never even thought about how bright the moons would make it.
Well, Rovewin of Athas.org made this awesome calendar of moon phases so this doesn't happen to your DM, or to you if you are the DM. 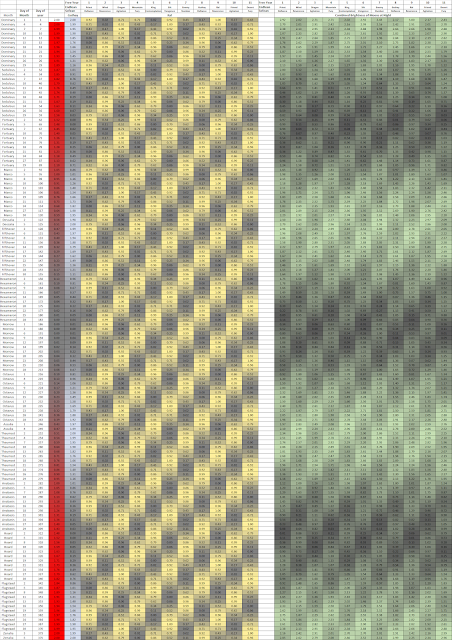 Special thanks to Rovewin, for allowing me to share this with all Dark Sun fans.