My experience lately is that it is becoming more and more difficult to find people who want to tabletop roleplay, especially young people, aka teenagers. All the teens I know, and most twenty-somethings, want to be anti-social and sit in front of video games all day. Now, I'm not knocking video games, I enjoy a few, but to me they were always something to do when you didn't have anything else to do.
I used to have no problem finding players, but now I can't seem to find a handful who are willing to play a campaign for longer than a month, or two. The local gaming store is of no help, as they are only interested in people playing the most recent edition of games, or card floppers (aka magic ccg players). I understand why game stores don't want people playing an older edition of a game they do not currently sell, but I can't afford to buy new books for all my rpgs every few years. Even so, if I see a tabletop game being run at a game store, it doesn't last long anyway.
All the players I find are older men and women, in their thirties or later. When that final generation purchases their last book, will that be it for tabletop rpgs? Or are attention spans so short that people cannot play a game a few times a month, for longer than two months?

I love being able to hand my players a tangible object that their players might hold as well. I believe it helps them get into character better. One of the easiest handouts is a menu to a tavern the might frequent.
Here is a sample menu I made. The dishes are not standard food that most Americans would eat. Use as is, or alter at your whim. 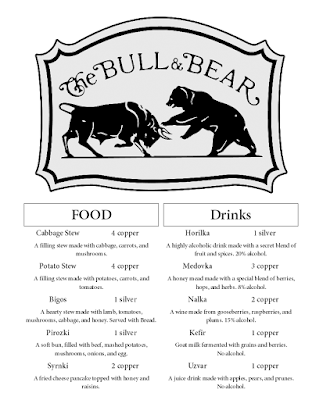 Last Game Session was Nearly a Year Ago.

Unfortunately, the last post will be my last about my Dark Sun game. It ended due to work and some players personal problems.
I am currently running an Earthdawn and Star Trek game and will randomly post things based on those 2 games. I will attempt to keep the posts as generic as possible, so they can be used in any game.

Here's a wanted poster I made for my Earthdawn game. Feel free to use it as is, or change anything you want. 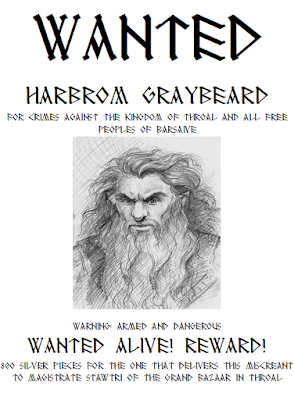 I did not draw the Dwarf, I found it randomly. If the artist contacts me, I'll give them credit, or delete it.

As Rata slept, he dreamed that he was at the base of the mountain and heard weeping. He opened his arms and began to fly toward the peak. Near the peak, he say a small outcropping and a dark cave opening. The weeping was coming from inside.

Rata woke with the sun high in the sky. Sharal had departed and he was alone in the air wagon. Rata prayed for spells, then went to Yaotl and told him about his dream. Sharal convinced Ren to feed him breakfast and then bragged to Yaotl about how Ren gave him their kanks. Yaotl protested, but quickly decided that they had more important matters to discuss.
Yaotl gathered the group and Rata told them all about the strange dream that had had taken place.
Read more »
Posted by Rajaat99 at 5:38 PM No comments: