The Kank and his Shadow. A Dark Sun Fable.

A traveler hired a kank and his owner to carry him across the desert. The day being intensely hot, and the sun at high sun, the traveler stopped to rest, and sought shelter from the heat under the shadow of the kank. As this afforded only protection for one, and as the traveler and the owner of the kank both claimed it, a violent dispute arose between them as to which of them had the right to the shadow. The owner maintained that he had lent the kank only, and not his shadow. The traveler asserted that he had, with the hire of the kank, hired his shadow also. The quarrel proceeded from words to blows, and while the men fought, the kank ran off. Both men died, for the kank carried all of their water.
Posted by Rajaat99 at 10:24 AM No comments: 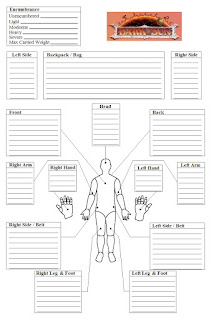 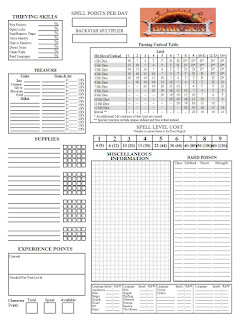 
A sick erdland lay down in a quiet corner of his scrub plain. His companions came in great number to inquire after his health. Each one helped himself to a share of the best plants near him. The erdland died, not from his sickness, but from a lack of nourishment.
Posted by Rajaat99 at 3:49 PM No comments:

I made this Athasian full page calendar, because keeping track of time can get a little confusing sometimes. It's too big to take a good screen shot of, but feel free to download, use, and enjoy. 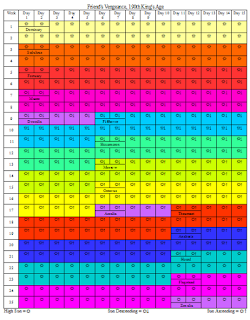 It's been far too long since I played Dark Sun and I'm getting the itch. The greatest AD&D setting has been on my mind a lot lately and I realized I made some mistakes when explaining villages. I always pictured them as a medieval looking village, just with less plants. Individual homes with hide roofs, maybe a common building and a small wall around it.
While I am sure some villages appear this way, ancient desert peoples in the Middle East built villages with many homes and buildings touching each other. The buildings would make up the wall, just by having thick walls and small windows toward the outside, or no windows on the outside.
Usually, the villages would have a courtyard in the middle for public gatherings or trade markets. Also, there were no direct routes to the courtyard, for defensible reasons. Attackers would have to fight down a hallway with at least three sharp corners, which are easy to defend. Or, they would have to fight room to room to get into the heart of the village. With all the threats on Athas, I have to assume that defense strength is taken very seriously.
Hopefully, I will be able to start another AD&D Dark Sun game soon. Wish me luck. 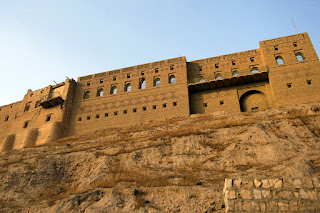