7th Sea: Second Edition is a swashbuckling game by John Wick Presents. I'll start off with the summary on the back of the book:

7th Sea is a tabletop roleplaying game of swashbuckling
and intrigue, exploration and adventure, taking place on the
continent of Théah, a land of magic and mystery inspired by
our own Europe. Players take the roles of heroes thrown into
global conspiracies and sinister plots, exploring ancient ruins
of a race long vanished and protecting the rightful kings and
queens of Théah from murderous villains.
Save the Queen of Avalon from
treacherous blackmail!
Thwart a dastardly assassination
attempt on the Cardinal of Castille!
Raid the villainous fleets of
Vodacce Merchant Princes!
Free the Prince of the Sarmatian
Commonwealth from a mysterious curse!
Make decisions that alter
the very course of Théan history!
In 7th Sea, you are a Hero, an icon of Théah ready to live
and die for causes that matter. You bravely take on a dozen
thugs with swords, knives and guns all on your own. You are
the trusted knight, a loyal bodyguard or even an adventuring
queen herself.
In other words—you are d’Artagnan, Milady de Winter,
the Dread Pirate Roberts, Jack Sparrow, Julie d’Aubigney,
and the Scarlet Pimpernel all rolled up in one!
This is a game of high adventure, mystery and action.
This is a game of intrigue and romance.
This is 7th Sea.

Those are big claims. Does the game live up to it's own hype? Let's find out.

I know it came out two years ago, but with how terrible 4th edition was, I was reluctant to take a look. One of my friends hounded me, so I took a look and I have to admit that it's better than I thought. My biggest complaint is that the rules are a bit confusing with the way they're laid out in the book. The rules themselves are simple, but whenever you're trying to find something that book redirects you to another location in the book. Kinda like calling your credit card company.

The Village of Wokurn is run by a merchant's council. It's cross-road location is profitable. Traveler's are always welcome, well at least their coin is.

Here's a map I drew: 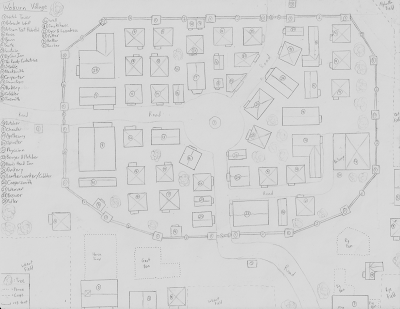 I'm looking for player handout ideas. What handouts have you received that enhanced the game, or what would you like to see?

The Rowdy Cockatrice is a tavern frequented by locals and less refined travelers. Heavy smoke permeates the air and you shouldn't ask about the thing that just scurried past you on the floor. This establishment is a tavern only, not an inn. 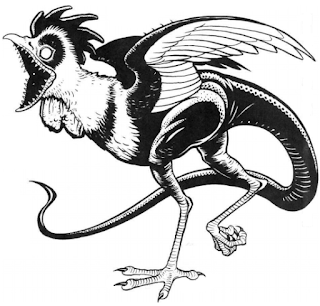 Download the menu here. The downloaded version doesn't seen to have saved the font I used, which is Viner Hand ITC.

How it Always Goes... 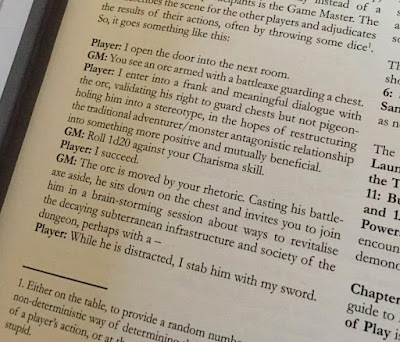