8, Sedulous, Dragon's Agitation, 190th King's Age
Yaotl woke first. He immediately woke Alroy and told him to go wake Ren and Aziza, in the other room. Alroy walked to the other room and knocked loudly. Aziza jumped up, ready to fight. Ren stretched and lazily walked over to the door and opened it.
"Yaotl wants to talk to you." Alroy muttered.
"Okay." Ren replied, then shut the door.
Aziza laid back down and went to sleep, while Ren hit his head against the door jamb to wake up. Ren made his way to the other room and promptly laid down on Yaotl's bed and fell back asleep. Cyrus was wake at this point, due to the commotion and began getting dressed. After a few minutes, Yaotl went to the other room and banged on the door.
Aziza opened the door and asked Yaotl what he wanted. Yaotl explained that they have to decide what to do with their prisoner. Aziza agreed and got dressed in her normal clothes. She finally arrived at the other room and the discussion began.
They discuss selling him into slavery, so making him look like an escaped slave. They decided not to make him look like an escaped slave, because they only slave markings they know really well are Nibnese. They all agreed that trying to sell a kidnapped agent, for the most powerful merchant house in Nibenay, in Nibenay was a bad idea. Finally, they decided that Cyrus and Aziza would teleport to Balic and trade the agent for a slave there. 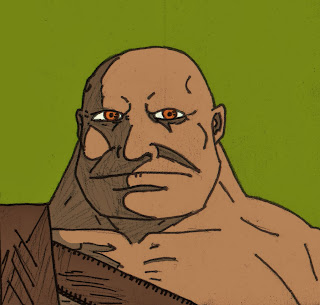 Here's a sketch of a Dwarf. You can use it as a PC, or NPC portrait.

The Affluent and the Mendicant

Without another word, Ren turned and began walking away. “Let's go.”
Everyone followed. They marched until dusk, the undergrowth slowing them considerably. They searched for a safe place to camp, but found nothing. They decided to keep a double watch that night, because they felt exposed.
An hour before dawn, Rata and Ren were watching. Rata was telling a convoluted story that Ren was having trouble following. The story was so dull that it was challenging Ren's Mul endurance. Out of the forest emerged an erdlu. Before Ren could speak, it grabbed Rata's backpack and tried to run. Rata got dragged off the log he was sitting on and he screamed in surprise. Everyone woke from the scream.
Ren quickly used psionics to put the erdlu to sleep. Aziza, Cyrus, and Yaotl laughed at Rata's misfortune. Once the shock of the incident wore off, Rata had to laugh as well.
Ren checked the erdlu for marks, or a harness of some kind. He found none, so he tied a rope around the creatures neck. Once it awoke, it panicked and tried to run, but Ren held it tight. Yaotl quickly walked over to the beast and calmed it down.
“This can be useful for the village.” Ren suggested.
Yaotl simply replied, “Indeed.”
Yaotl checked the sex of the erdlu and discovered it was male.
The group packed up camp and began the arduous march through the Crescent Forest. A few hours into their march, they ran into a group of four foot long scorpions.

The scorpions and Yaotl were surprised. Ren attempted to activate accelerate, but failed. Rata blessed the group, Aziza used the psionic ability flesh armor, Cyrus shot at the scorpions with his longbow, and Alroy ran and hid behind Cyrus.
The man who swore to serve Ren rushed in front of him, as the scorpions rushed up to attack. Ren was struck, but the scorpion's poison did not effect him. Ren's guardian was struck a few times and fell. He died and the group had never even learned his name.
Read more »
Posted by Rajaat99 at 12:15 PM No comments: 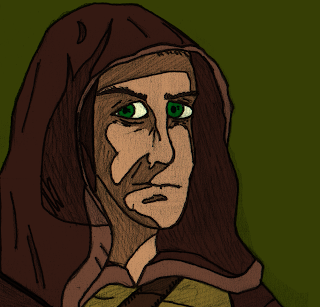 Here's a sketch of a human, or Half-Elf. You can use it as a PC, or NPC portrait.