Finding miniatures for Dark Sun has always been a challenge, but nothing has been more difficult than finding a beardless Dwarf. All Dwarf miniatures are Tolkien Dwarves with long beards. I have found one Dwarf without a beard and this is it. I purchased it too and it now sits on my shelf, primed and waiting for paint.
I also got this guy because he has wrist razors!
Has anyone else out there found any miniatures that fit Dark Sun perfectly? Any other bald Dwarves? Let me know.

Email ThisBlogThis!Share to TwitterShare to FacebookShare to Pinterest
Labels: Miniatures

The group ran for nearly twenty minutes, the hot stone burning their unprotected feet, before Fikri indicated that the farm was just a few yards away. Vashti laid her cloak on the hot ground and then laid atop it. She began crawling, using her cloak to prevent the hot stones from burning her skin, toward the edge of the small fifteen foot cliff that overlooked the erdlu ranch. Everyone else walked past her.
Once they reached the edge of the cliff, they saw three gith attempting to break into a storage building and one more guarding a house a few yards from the others. Alaxander began shouting insults at the gith. Being so far away, only one of gith heard him, but could not pinpoint his location. Alaxander and Guacamole climbed down the short cliff while everyone else went down the gradual slope. Kalino, Julius, Vashti, and Fikri hid behind some yucca trees. Alaxander and Guacmole attempted to hide also, but had to cross a wide expanse first. While crossing the expanse, they were spotted and the gith rushed towards them. 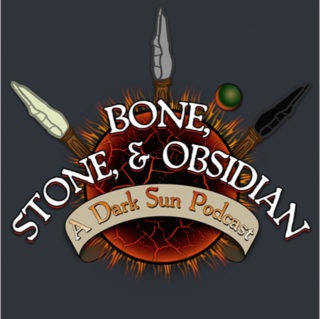 I recently discovered a great Dark Sun podcast called Bone, Stone, and Obsidian. While they talk about other than second edition Dark Sun and I disagree with their outlook on Templars, it is still interesting to listen to.
Check them out here: http://misdirectedmark.com/category/podcasts/bsao/

They stared at the stone door for little while, then Guacamole began moving the rocks that would prevent the group from rolling the pillar away from the door. Alaxander grabbed a rock and began banging it on the door, just to see if something banged back. Nothing did, so he began assisting with the removal of the rubble.
Once the rubble was removed and the pillar rolled out of the way, Alaxander got the idea to take a peek into the room using the Way. He made himself and the orb he was holding insubstantial and put his head and the orb through the door. Inside, he saw a dark-skinned Dwarf standing on an old table that looked about to collapse. He was beating two skeletons back with a stick, but would soon fall. Alaxander stepped back from the door and told his companions to open the door.
Once the door was opened, Guacamole rushed inside and attacked one of the skeletons and the others followed. Julius, unfortunately, was viciously wounded and the way failed him, when he tried to counter attack. Once the skeletons were defeated, the Dwarf thanked them. He told them his name was Abu Talib and he was an escaped slave. He explained that he, and three others, were escaped slaves and had come upon these ruins. In the process of exploring the ruins, they got separated and he was trapped inside the room when they were fleeing the skeletons. He didn't know how the pillar collapsed, but he'd been holding back the skeletons for three days.

Although suspicious, the group invited Abu to join them. Abu agreed and the group went upstairs to rest by the well. They set up camp and Alaxander offered to keep the first watch, while he continued work on his chitin shield.

When he woke Kalino for this watch, Kalino indicated that Abu was gone. Alaxander woke everyone, told Julius that Abu was gone, and tried to indicate it to the others. Guacamole could see that Abu's tracks went outside of the keep and pantomimed it to the others. It then took Julius awhile for the group to get past their communication barrier, but he finally made it clear that he wanted to move their sleeping place, just in case Abu came back with slavers. Everyone agreed and the group moved downstairs, into the storage room where they found water and kank honey.