The original Dark Sun boxed set came out in 1991, designed by Troy Denning and Timothy Brown, and the revised box set came out 4 years later, 19951 designed by Bill Slavicsek. Both are for AD&D Second Edition. What's the difference?

First, we'll take a detailed look at the rule books that came with each set.

Appearance: They're both ninety six pages long, so neither is thicker than the other. Both are soft cover. The art of the original rules book is much better, in my opinion.
The original cover features the familiar Dark Sun logo. The artwork shows a Tarek charging an unknown foe. The land is desolate, a city is far in the distance, Ral, or Guthay, is rising above the horizon, and a creepy skeleton guy is watching what's going on. Painted by Brom, it's simply a wonderful work of art.
The revised edition cover features a new logo. I don't know why they felt the need to change the logo, because there was nothing wrong with the original. The artwork shows a Mul, Thri-Kreen, and, who I assume to be, the Wanderer fighting a Pterran riding a Silk Worm. There's some ruins in the background and a dark, cloudy sky with lightning crashing down. Painted by Stephen A. Daniele, it's a nice painting, but lacks the quality of the original.

Conclusion: The original looks better.
Read more »
Posted by Rajaat99 at 11:22 AM No comments:

Players should not read any further. Dungeon Master eyes only!
Read more »
Posted by Rajaat99 at 8:53 AM No comments:

The party set off, marching through the rocky badlands. A few hours into their journey, they encountered a group of about a dozen Thri-Kreen. They quickly decided that discretion is the better part of valor and hid among the rocks. The Thri-Kreen spotted them and stopped close by. Yaotl stepped out from behind the rocks.
"We are travelers. We mean you no harm."

Here's a quick sketch and coloring of a Mul. You can use it as a PC, or NPC portrait. 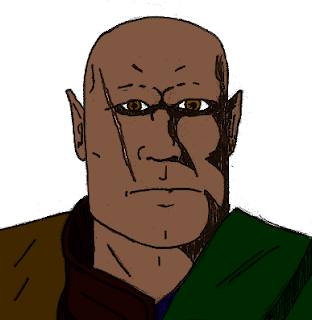 Yaotl, drawn with pencil and inked with pen. 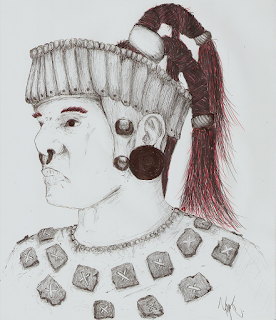 Gith, Cactus, and Carru, oh my!

The group began by turning its attention to the gith they captured. Yaotl held it down, while Ren, Kaza, and Roan psionically broke its mind. Roan, using his psionic probe ability, was able to determine the location of the gith camp and the location of the slaves in the camp.
They turned the gith over to Ishak, who tied him up.
“We turn him over to your justice. Free him, kill him, it is as you wish.” Ren explained. “Tomorrow, we will go and find the people they took from you.”