Far to the northeast of Draj, on the edge of the Silt Sea is a small trading village run by House M'ke. The outpost is nearly all Dwarves, but run by a human. The outpost is so far out of the Tablelands, that I have not visited it personally, so I have asked a Draji Dwarf trader named Tenoch to provide more information about the village. Tenoch has traded with the outpost numerous times and happens to owe me a favor. So, here is the commentary he provided.

The history of Charvass needs to be explained before I can explain the Dwarves themselves. Charvass used to be a subsistence farming village next to an extinct volcano. The old volcano had rich soil, but growing anything close to the Sea of Silt is strenuous. Then House M'ke came along and convinced the Dwarves to mine obsidian from the old volcano and import all their food instead. This only happened four years ago and the village and outpost are quite well established. It shouldn't be a surprise how much the villagers got accomplished in that amount of time. They are Dwarves after all.

The small group of Dwarves there call themselves the Moratuc and can't recall the founding of their small village, which is named Charvass after the volcano. As far back as they remember, they were farmers, eking out an existence and trying not to starve. They prefer their current arrangement with M'ke. The Moratuc mine obsidian for ten hours a day and trade it to M'ke for food, water, tools, ale, and everything else they need.
The M'ke outpost at Charvass is called Usat. However, most people just call it Charvass because the village has been built up around the outpost and the two are so closely related. The leader of the outpost is a human named Trenbull Allraam'ke, and he was the M'ke merchant who convinced the Moratuc to switch from farming to mining. Trenbull has adopted many Maratuc traditions and mannerisms. He shaves all the hair from his body and has fierce determination when it comes to Charvass. I've even heard it said that the Moratuc think he has a focus. That, of course, is a joke. No human, no matter how determined, can ever truly have a focus. A pretty enough girl or a large enough pouch of coin would steer him away from Charvass in an instant. That's just the way it is with humans.
The Moratuc and House M'ke keep most of their valuables inside the volcano and retreat there if under attack. The empty village won't hold much to interest raiders and the caves of the volcano are easy to defend. This tactic won the villagers a trade deal with the giants from the nearby islands. The giants can't raid them, so they're forced to trade. The fact that the giants are the savage beast-headed variety makes the sight even more bizarre.
I've heard some human traders say the Moratuc aren't like other Dwarves, like we're all one person, without any differences. They say that the Moratuc aren't as surly as other Dwarves and they laugh more easily. Of course, the Mortatuc only seem different because they're so far removed from the Dwarves of the Tablelands. Their accent is so thick, one can hardly tell that they're speaking Dwarf at all. They're practically slaves of House M'ke, but are too naive to see it.
The Moratuc themselves don't seem too interested in leaving their hamlet and don't seem to share much of a kinship with other Dwarves. They show great respect and admiration for the volcano and I doubt they'd tolerate any insults toward it. Of course, who insults a volcano? They generally wear simple erdlu leathers for working. They do paint a stripe of ash across their eyes and they seem to think that this endows them with some sort of fortitude. Of course, it's all nonsense, but even Trenbull does it.
Charvass architecture is nothing to be envied or awed by. The village has been established at the based of the volcano, using the mining debris as construction material. The outpost dominates the village, with a storehouse and an eight foot stone wall. The wall is mostly for show, as the occupants just take their valuables into the mountain, if under attack. Around the outpost are several homes that house the residents, which are small and box-like. There are no inns or taverns, as Charvass does not see many travelers. 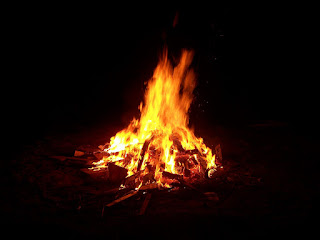 Even though the Moratuc are backwards as Dwarves go, I did have the pleasure of being present for one of their celebration days that only happen twice a year. They call it the Feast of The New Sunset and I have no idea why. The celebration takes place when the sun goes down and features a bonfire, dancing, drumming, and chanting. They freely welcomed visitors and shared their food and drink. When I asked what they were celebrating, they always pointed to the volcano. I didn't understand, but the feast and celebration were enjoyable.
Posted by Rajaat99 at 2:14 AM