The Athasian Elemental Planes Part Six: The Plane of Magma 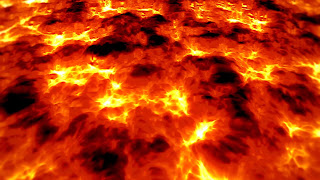 The Paraelemental Plane of Magma

A churning mass of molten stone forms an ocean of lava that spews acid and poison into the air. Jagged crags made of obsidian and basalt rise out of the magma and reach for the endless toxic sky. Anyone who travels to this plane unprepared will not live long to regret it.
Long ago, the Paraelemental Plane of Magma was small and lazily drifted toward the Planes of Earth and Fire. The inhabitants of the plane were content to wade and swim leisurely through the molten stone. Now, huge storms that form cyclones of magma and acid rain rage across the plane; while the inhabitants of the plane howl in madness and cry for the destruction of all that will feed their plane.

The largest pits of lava on Athas cannot compare to the destructive might of the Paraelemental Plane of Magma. The heat and pressure of the liquid stone are sure to burn and crush anything that enters it. A simple protection from fire spell would not protect a visitor from the crushing pressure or toxic gas.

Heat
Any non-magical and unprotected flammable material like paper, cloth, and wood bursts into flames in one round. Anyone wearing these items takes 1d10 points of damage if they are not shielded from damage caused by flame or heat. Magical items are allowed saving throws vs magical fire with a -2 penalty, if they are made of flammable materials.
Unprotected water or other fluids instantly boil away into steam. Exposure to this super-heated steam suffers 2d10 points of damage, unless protected. Magical fluids may make a saving throw vs magical fire or be destroyed.
Upon arrival, there is a 15% chance that non-magical and unprotected stone, excluding volcanic rock, melts into magma in six rounds. This inflicts 3d10 points of damage to anyone in close contact with such material. Living creatures, or automatons, made of stone suffer 1d6 points of damage per round. Volcanic stone, such as basalt, obsidian, and pumice are immune to this damage. Magical stone may make a saving throw vs magical fire with a +2 to avoid damage.
Upon arrival, there is a 1% chance that non-magical and metal items heat to their melting point in eight rounds. This causes 4d10 points of damage to those in contact with the metal, and may potentially disable limbs as the heat metal spell. Magical metal items may escape this fate by succeeding on a saving throw vs magical fire with a +3 bonus.
Creatures of flesh and blood suffer damage each round they are exposed to the heat. The severity of their damage is based upon their natural armor class. Damage for armor class ten is 4d10, with a d10 reduction for every three points of lowered armor class. So, a natural armor class of eight would still be 4d10, seven would be 3d10 and four would be 2d10. This means a natural armor class of -1 and lower takes no damage.

Lack of Oxygen
The air on the Paraelemental Plane of Magma is filled with toxic gases. An unprotected visitor must make a saving throw vs breath weapon each round or suffer 1d10 points of damage. A visitor can hold their breath, but once they start breathing again, their saving throw is at a -2 penalty, because they are taking in large gulps of air.


Elemental Pockets
Pure elememental pockets offer refuge to travelers. A pocket of clean air or water offers a respite to visitors whose spells are running out of time. However, native creatures from the Plane of Magma tend to watch elemental pockets for signs of their next meal or victim.
Mixed pockets are dangerous places to be, as the heat of the plane mixes with whatever material enters the plane. Air becomes toxic and water explodes into steam. Anyone caught by these takes damage, unless otherwise protected. Exact effects are left up to the arbitrary decisions of the DM.

Blazing Clouds
On Athas, the sight of a cloud is a welcome vision and a desire for rain. However, on the Paraelemental Plane of Magma, the clouds are made up of burning acidic vapors.
Entering a blazing cloud is foolish and causes 2d10 points of damage per round of exposure. This damage may be cut in half if the victim succeeds at a saving throw vs breath weapon. If the victim is magically or psionically protected from fire or acid, they gain a +2 bonus to this saving throw. If they are protected from fire and acid, the victim is immune to this damage and need not make a saving throw. The saving throw must be made every round the victim remains in the cloud.
In addition, these clouds occasionally rain acid down upon those below them. Those beneath the cloud take 2d10 points of damage and must make a saving throw vs breath weapon. Success cuts the damage in half. Protection from acid protects against this damage.

Bubbles and Geysers
While on or above the surface of the paraplane, a visitor must be weary of the unpredictable nature of magma. Each turn, there is a 10% chance that a bubble of magma explodes near a visitor or a geyser of magma explodes upward. If an unprotected visitor gets struck by magma from a bubble or geyser, the visitor takes 3d10 points of damage. In addition, eben if protected from fire or heat, the victim must make a saving throw vs petrification or be flung 3d10 feet away by the force of the bubble or geyser.

Magma Cyclones
The toxic air on the paraplane is often whipped up by high and low pressure, as well as the unbridled rage of the natives there. These cyclones throw the magma of the paraplane in a one-hundred twenty foot radius. Anyone unprotected that gets hit by this magma must make a saving throw vs breath weapon or take 3d10 points of damage. Even if protected from magma, the speed of the magma hitting the victim causes 1d10 points of bludgeoning damage.

Pressure
Traveling beneath the liquid magma with magic or psionic protection from heat will not save a traveler from the crushing pressure. The first round a character is inside the lava without any sort of protection they take 1d4 points of damage. The second round, they take 1d6 and the third, 1d8. The damage maximum is 1d8 points of damage per round.

Unless a native, breathing on the Paraelemental Plane of Magma is impossible without magic or psionics. Under the magma, there is no air to breath and above the surface, the air is thoroughly toxic. Above the surface, a visitor without magic or psionic protection must make a saving throw vs poison or die for every round of exposure. No technological device has been constructed that will allow a visitor to breath the toxic air.
Vision below the surface of the magma is impossible without magical or psionic assistance. Vision above the surface is limited to 120 feet and is doubled for natives. The heat of the paraplane makes the use of infrared vision impossible.
Gravity exists on the paraplane, but this does not make moving through it easy. Even when protected, a great deal of the plane is thick liquid that one must swim through, or drown. A traveler may be lucky enough to encounter an obsidian or basalt island, but these are very rare. Flying seems to be the fastest way to get around, if protected from the acidic clouds and toxic air.

Animals
Magma silt horrors are the only animal found on both Athas and the Paraelemental Plane of Magma. Magma silt horrors swim through the ocean of lava, attacking anything edible within their reach. How these horrors came to be on the paraplane is unknown.

Drakes
Magma Drakes swim through the liquid stone of the plane, seeking enemies to devour. They openly follow the commands of the Paraelemental Lords. They are used often in the Elemental War. Their masyers whip them into a frenzy and loose them into enemy combatants. Although rare, magma drakes are devastating combatants. The sight of one crushing an earth or fire elemental into nothingness can boost the morale of magma's allies and crush the morale of magna's enemies.

Firenewts
These magma loving creatures were once staunch allies of the Elemental Plane of Fire, but they swore fealty to the Magma Lords a thousand years ago. The leaders of the firenewts believed that the Plane of Fire was going to lose the war, so they decided to ally with a winning side.
Firenewt society is lead by the highest level magma cleric. They fight alongside the paraelementals in the war, oftwn against the plane that birthed them. Fire elementals and Azer hate firenewts for their betrayal and take pleasure in killing them.

Monsters
Magma paraelemental beasts are common on the Paraelemental Plane of Magma. They are used to attack the Planes of Fire and Earth. The Lords of Magma treat them as useful fodder.
Few other monsters are able to survive the intense heat, pressure, and lack of oxygen on the Plane of Magma. 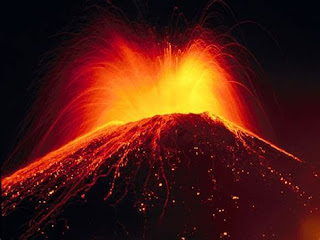 The Grand Volcano
This huge basalt mountain pulls lava into it, instead of flowing out of it. Once inside, the magma flows into a bubbling lake of lava on the Elemental Plane of Fire. This is where magma forces invade the forces of fire.
Paraelementals and paraelemental beasts swarm the mountain, waiting for the opportunity to go to battle for their masters.

The Frigid Battlefront
A permanent cyclone of magma roams the Plane of Magma, throwing dangerous magma all around it. Magma Paraelementals and Magma beasts willingly fly into the cyclone. The cyclone takes the magma creatures and sends them through a volcano, which spills into the uncomfortably cool Elemental Plane of Earth.
Even though the magma forces do not like the coolness of the Plane of Earth, they know that for the forces of magma to succeed, the Plane of Earth must be destroyed.

The Obsidian Plane
This great plane of obsidian sits in a desolate region of the plane, where even the forces of magma rarely tread. For some unknown reason, this part of the paraelemental plane is cooler than the rest of it and formed a large obsidian island, roughly one square mile. This area is only about 120 degrees F (49 degrees C), so while very hot, visitors may be able to survive without magical or psionic heat protection.
The Paraelemental Lords send their minions to try and destroy the island on occasion, but the magma cools and hardens back into obsidian in 1d10 weeks. This area of coolness enrages the Lords of Magma, but there seems to be nothing they can do to permanently destroy it.

Part Seven will cover the Paraelemental Plane of Rain.