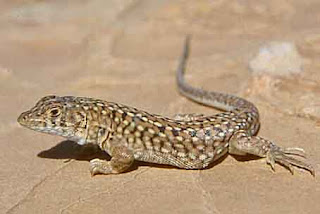 The Gardax is a tiny, but fierce lizard. Males aggressively guard their territories against anyone they see as a threat, especially other males. Gardax males keep a group of females in their territory to breed with.
They have a brown and black coloration that provides good camouflage in the desert wastes. They have upper jaws which overlap the lower ones and nostrils that can be closed at will. Flaps also close against the ear openings and the upper and lower eyelids have interlocking scales. These adaptations prevent the intrusion of sand particles into the lizard's body. 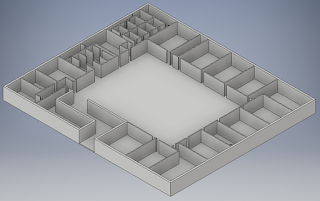 Magosa is a tiny trade village one day walk from Altaruk, along the Altaruk-Gulg road. Magosa was founded by a small group of ex-slaves. There are only twenty-two permanent residents that live in the village directly, with a small erdlu ranch within half a days walk from the village. The leader of the village is called the Pasha. The Pasha was selected when the village was founded and no plans were made for the transfer of power if the current Pasha dies. Magosa has eleven acres of yucca trees growing in the hills around the village.
Magosa is nearly self sustaining, but needs trade to survive. The village can produce many survival goods from their yucca trees, like clothing and food, and is aided by the nearby erdlu ranch. However, the village's well is barely adequate to provide for the village and the yucca trees. Magosa also does not have a weaponsmith, armorsmith, or a supply of obsidian.
The bone gates of Magosa are closed at night and the entrance hallway has two additional gates to slow down an attack. The open air market area is often set up with tents to sell the few goods the residents produce. The roofs of the buildings are made of erdlu hide and the walls are stone or wattle and daub. The outside walls and entrance hallway walls are two feet thick stone. Inside walls are ten inches thick and made of wattle and daub.
The village, when measured from the outside, measures 225 feet by 199 feet. Slaves are not permitted inside the walls of Magosa, but are officially tolerated outside.

Email ThisBlogThis!Share to TwitterShare to FacebookShare to Pinterest
Labels: Location 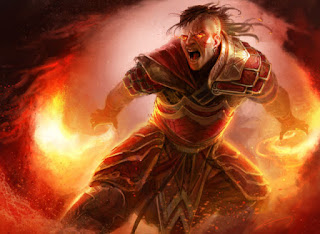 Lareth, like many magma clerics, is insane. His goal is to build an army of undead to tunnel into athas and raise magma to the surface. He leads the raiders and collects the dead. The raiders don't know his ultimate goal, but follow him for the goods they take.
He gladly let his minions fall, as he can raise them later to dig. He has quite a few zombies and skeletons working to dig deeper in the tunnels below the abandoned keep. If he is killed, they will continue to dig until they are destroyed.

Jessel held out his holy dirt and commanded the undead Asli to flee. Nearly everyone else waited for her to move, because she was blocking the doorway. Shade threw a bone dagger at the magma cleric, but missed. The cleric  himself cast a spell at Jessel and Alaxander, they were held fast.
As soon as Asli fled Jessel's turning, Kalino rushed in to confront the cleric. The intense heat of the two foot tall magma elementals was causing Kalinos skin to blister. Julius used cryokinesis to cool one of the elementals. Alaxander used ballistic attack and struck the cleric across his brow, opening a wide gash. Shade ran in and attacked one of the magma elementals, but hitting the creature with his bone club had no effect. Vashti rushed in to heal Kalino the best she could. Jessel was frozen in place.
While maintaining his cyrokenisis, Julius began ballistic attacking the cleric along with Alaxander. Their hits disrupted the spell the cleric was preparing. Kalino slashed the cleric in the chest, opening a deep wound. The magma elementals tried to attack Kalino, but missed. Vashti continued to heal Kalino, who was still taking heat damage from one of the elementals. Shade moved to attack the cleric directly, but missed. Jessel was frozen in place.
Julius destroyed one of the magma elementals with cyrokenisis and, along with Alaxander, used the way to ballistic attack the cleric. Shade struck the cleric with his club. The cleric lashed out with his wood, obsidian laced, club and knocked Kalino out. Vashti dragged Kalino into the other room to heal him. He was alive and stable, but remained unconscious. The remaining elemental moved to attack Shade, but missed. Jessel just stood there.

Dwarves of Athas Part 1: Forged in Fire and Stone


I am Karpos, human merchant from Balic. I have traveled the Tablelands and learned much of the various races that live here. I trade a great deal with the villages of North and South Ledopolus. In that time, I have learned a great deal of the Dwarves. Dwarves usually won't answer questions, unless it has to do with their focus. However, if they trust you and you buy them a few drinks, you may hear a story of two.
My friend Kallias is considered quite the beauty by her fellow Dwarves and she gets quite talkative after few mugs of mead. Seven mugs to be exact, which cost me more than I was wanted to spend, but after a long journey, I found her company pleasant and her tale fascinating.

Forged in Fire and Stone
Athas was created by a powerful being, simply called the creator. Others have named the creator Durgonis, but that's nonsense. The creator had no name. The creator was both male and female and had hold of all of the elements. This creator created the sky, the stars, the moons, and Athas itself, but it wasn't like Athas today. It was a bitterly cold wasteland. There were no cities, or even villages, as no intelligent race existed. The creator looked upon his creation and wept a single tear, for there were no other beings to enjoy his creation.
This one tear fell into a volcano. The tear was changed by the molten mixture of rock and fire, it became life. This new creature crawled from the molten lava and was cooled by the cold air. The creator called this creature, which was made of all four elements, Dwarf and named him Torran. Because of the cold, however, Torran had hair to keep him warm. Torran had a love of creation, like the creator itself. Together, they created more.
They created more Dwarves and then the other races. Dwarves had a greater portion of Earth, to make then strong and resilient. Humans were crafted from equal amounts of each element to make them balanced. Elves had a greater portion of air, to make them swift, and Halfings had a greater portion of fire, to make them fierce.

This is the history of Athas from the point of view of the elemental lords.

The Nushki has fur that is of a pale, sandy, light brownish-yellow color. Markings vary, but most are lightly striped. There are dark brown bars on the limbs, and the tail has a black tip with two or three dark rings. It stands one to one and a half feet at the shoulder. From nose to the base of its tail, it is twenty inches long with an additional foot of tail length. Nushki weigh about ten pounds.
Nushki are solitary creatures, except mating season. Females give birth to a litter of three to five kittens seventy to seventy-five days later. The parents will stay with their kittens for eight months to a year. After that time, they part ways and each claim separate territories. Both parents will fight to the death if they feel their kittens are in danger.
Nushki live in burrows, but do not dig them. They will generally take over the burrow of another creature. They are crepuscular and nocturnal. Their diet is made up of small rodents, lizards, snakes, and insects. They are able to get all their required moisture from their prey, but will drink if water is available. They have been known to attack small children, but only when other prey is unavailable.
The Nushki does have claws and sharp teeth, but the cat's psionic powers are the creatures most useful weapon when stalking prey. They will generally use their ecoplasmic form to approach their prey, usually through solid objects, and adrenalin control to attack.
Stats after the jump (Some of the information is duplicated for ease of reference.)

A Day in the Life of Kassem of Tyr

Athasian life is hard, even in the relative ease of the city-states. The average laborer has the difficulty of competing with slaves, who work for free. Due to this competition, an unskilled laborer only earns two bits per week, which is fifteen days on Athas. Even a skilled laborer, which most free citizens are, only earn a single bit per day.

A gallon of water costs two bits, and a pound of rice, or a loaf of farro bread, is a single bit. With these costs, it seems a city dwelling citizen has a difficult choice of either starving to death or dying of dehydration. Then, there is the problem of getting clean on a world where water is scarce. So, we'll follow a young adult citizen of Kalak ruled Tyr, Kassem, as he goes about a normal day.