7th Sea: Second Edition is a swashbuckling game by John Wick Presents. I'll start off with the summary on the back of the book:

7th Sea is a tabletop roleplaying game of swashbuckling
and intrigue, exploration and adventure, taking place on the
continent of Théah, a land of magic and mystery inspired by
our own Europe. Players take the roles of heroes thrown into
global conspiracies and sinister plots, exploring ancient ruins
of a race long vanished and protecting the rightful kings and
queens of Théah from murderous villains.
Save the Queen of Avalon from
treacherous blackmail!
Thwart a dastardly assassination
attempt on the Cardinal of Castille!
Raid the villainous fleets of
Vodacce Merchant Princes!
Free the Prince of the Sarmatian
Commonwealth from a mysterious curse!
Make decisions that alter
the very course of Théan history!
In 7th Sea, you are a Hero, an icon of Théah ready to live
and die for causes that matter. You bravely take on a dozen
thugs with swords, knives and guns all on your own. You are
the trusted knight, a loyal bodyguard or even an adventuring
queen herself.
In other words—you are d’Artagnan, Milady de Winter,
the Dread Pirate Roberts, Jack Sparrow, Julie d’Aubigney,
and the Scarlet Pimpernel all rolled up in one!
This is a game of high adventure, mystery and action.
This is a game of intrigue and romance.
This is 7th Sea.

Those are big claims. Does the game live up to it's own hype? Let's find out.

I purchased the book through the John Wicks website, which I was a little disappointed by. The book was not available through my local gaming store and that was disappointing. I try to support my local gaming store, because that is how our hobby is going to grow. I purchased the hard cover book and PDF for $59.99, which I understand  is standard these days. I have not yet received the book, but I did read the PDF. The book is 303 pages, including index and table of contents.

I always browse through my new rpg book and check out the artwork, before I read anything. I was not disappointed. The art work is gorgeous and does a good job of setting the mood. All of the art is full color. All of the pictures in this review will be shamelessly stolen from the book, so judge for yourself. 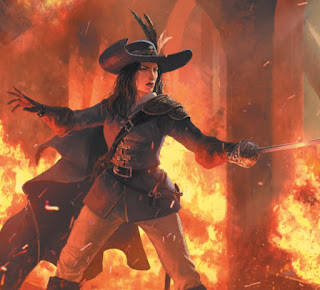 The first eight pages are a story that I did not read, so you'll have to decide for yourself if it's any good. Now on to the meat.
The first chapter introduces the fictional continent of Theah and sets the year at 1668. It continues by explaining some of the concepts of the game. Swashbuckling, sorcery, piracy, adventure, diplomacy, intrigue, archeology, exploration, romance, and revenge. It goes on to the expected what is a roleplaying game stuff that is in every rpg main book and lets the reader know that the game uses D10s. Finally, it gives a broad overview of the setting; including nations, religion, and other powers. It teases about other continents outside of Theah and promises to reveal more in later published books.
Verdict: It does a good job of setting the mood and giving readers an idea of what to expect in the game. 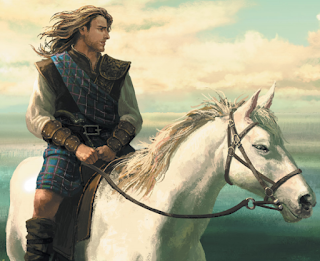 The second chapter delves into more detail about Theah. It mentions attitudes toward nationalities and sex. It also includes an in game map for the players. Then, it gives a detailed write up of each nation that include the culture, naming practices, clothing, currency, customs, art and music, religion, government, military, and current relations with other nations. Each nation gets about 2 to 4 pages for all this information. Although, the nation of Montaigne gets a whopping 9 pages.
The chapter continues by explaining why the game is called 7th sea and details non-nation organizations that hold power. It also gives some flavor write ups on some monsters that are present in the setting. This chapter is very large, beginning on page 20 and extending to page 115.
Verdict:  The setting is great. Pretty good detail on each nation and an idea about what to expect from a standard non-player character from that nation. The write up of the Vaticine Church was particularly interesting. I wish it had a bit more on the nation's history, but I expect we'll get that in the later books. There is some reference to things or people that are not explained in this chapter, which is confusing.

The third chapter covers character creation. This chapter begins with another short description of each nation, appearance of its populace, typical professions, religious information, and common attitudes. It then encourages the player to answer twenty concept questions before plugging in numbers. Then it's a simple task of assigning your hero their stats, skills, advantages, virtue, and hubris. Nation of origin gives you a bonus to one stat or another. Skills are initially chosen by picking two backgrounds for your hero. Basically, what they did before they became a hero? Advantages are special things your character has that sets them apart from others. Your virtue is something that defines your character and gives you a special ability your hero can use once per session. Your hubris is something negative that you are rewarded for roleplaying properly. Lastly, the chapter gives ideas and details about writing what it calls your characters story. Basically, it answers the question: "Why is your character adventuring? Why is she/he a hero?
Verdict: The nation information is fine, but it should have been included in the previous chapter. It clears up some confusing parts from chapter two and it duplicates some information from that chapter as well. I don't understand why the authors believed this was the best spot to put this information. Everything else is great. The character creation is straight forward and does not seem overly complicated. I love the backgrounds, as some games do not emphasize the character's past; also I enjoy the idea of a hubris being rewarding if roleplayed properly. 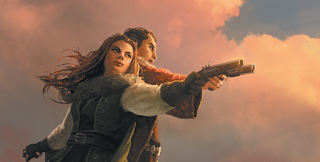 The fourth chapter is the rules chapter. Being a story driven game, the rules seem simple and straightforward. There's no complicated maneuver list or target numbers. Basically, the gamemaster chooses the consequences of risky actions that the players want to make. The player roles their appropriate stat + skill and attempts to avoid the consequences. Here's the fun part: The player tells the gamemaster what stat and skill is appropriate, then justifies why. If the gamemaster agrees, the player rolls. Also, the rules encourage the players to create storytelling opportunities for themselves, or other players, if they roll well enough. It sounds a little perplexing, but it explained well in the chapter. The chapter also includes information for the game master about villians and monsters. Monsters are simple and treated as villians or brutes with one or more special abilities. Also, it has rules for when a hero falls from grace and character advancement. If any of it is confusing, they include a couple of play examples.
Verdict: I have not yet played the game, but it seems very simple and straight forward. The rules actually encourage active thinking on the part of the players, not just die rolling. Your players may not have the necessary skills for the obvious solution to the problem at hand, but get the opportunity to be creative and possibly come up with a solution no one had thought of. There are also rules that reward the characters for helping each other out, which encourages teamwork.
The only obvious negative I see with the rules is that of character advancement. Characters advance through completing stories. The longer the story, the more advancement they get. I do not like this. For one, it pushes the use of planned plots and steps the players must accomplish to complete them. I like to run games in a more fluid manner, allowing the players to drive the game, not the game master. Also, players only get the opportunity to advance after a story is complete, which can feel very long if the story takes quite a few sessions to finish. I'll have to house rule it and write my ideas, hopefully it will not be difficult.
Excluding the advancement rules, the rules are simple and don't seem to be missing anything. I will write more after playing the actual game to see if this is the case.

Chapter five is all about the various sorcerous arts on Theah. It covers Hexenwerk, which is basically alchemy that works with or against the undead; Glamour, which grants various special abilities based on certain stats; Mothers Touch, which grants animal-like abilities; Porte, which is teleportation... really awesome teleportation; Sanderis, which is making deals with demons for good and ill; and Sorte, which allows a fate witch to grant various abilities to other, or herself.
Verdict: Sorcery is cool. It does not seem overly powerful and the flavor of sorcery adds a lot of entertainment to the game. Sorcery surprising doesn't seem too rule heavy. The only thing I am disappointed about is the lack of rune magic that is mentioned heavily in chapter two.

Chapter six is all about dueling. Dueling, like the rest of the rules, seems uncomplicated. You pick a maneuver, as does the opponent and you role to see who succeeds. There are dueling schools that give various bonuses to certain maneuvers or grants alternate maneuvers.
Verdict: I'll have to play before I can judge for sure, but dueling might take awhile to complete. There's a lot of damage negating maneuvers, which might draw the duel out for awhile. 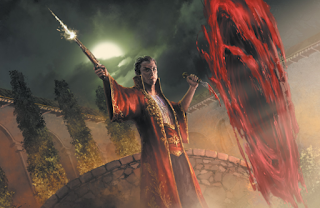 Chapter seven covers rules and flavor about sailing and sailors. Flavor is given about what sailors have to endure. Ship types and ship professions are provided. There's not a lot of rules, surprise, but it seems to work. Ships are given their own special abilities based upon their history and reputation. The ship can basically become its own character. There's a few rules on ship maneuvers and combat options. There's a brief rule simple way of handling cargo for trade as well.
Verdict: Simple and straight forward, like the rest of the book. I like a lot of special abilities for the ships history and reputation. I can see players, and characters getting emotionally attached to them. One thing I would love to see is a short list of sailing terms and superstitions, real or Theah specific. I mean, do sailors on Theah mention "Davy Jones Locker?" 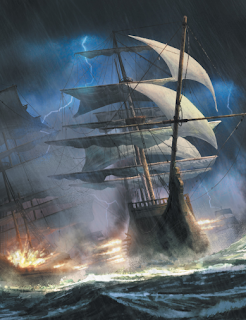 The eighth chapter is all about Theah's secret societies. Secret societies are prevalent on Theah and joining one can lead to a lot of adventure, if you know it exists. Being a member of a secret society allows a character to call in favors and ask them for aid. To use these, a character must do things and provide information to their society. Flavor text is included for the secret societies, or course, as well as what aid and favors they may offer.
Verdict: Simple seems to be the concept of the rules in the book. The secret society flavor write-ups are good, but seem to be holding back secrets even from the readers. It's a good chapter that adds some drama and more flavor to the game. 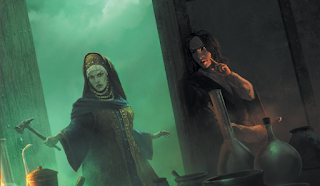 Overall Verdict: My praises are common and my gripes are few. 7th Sea seems like a wonderful storytelling roleplaying game. If you love hack -n- slash, this is not the game for you. If you and your players enjoy telling stories and being creative, I don't think you could go wrong with 7th Sea second edition.

I may update the review after I have a chance to play the game, which I will in the next few weeks.