Cyrus pulled out his iron dagger and slit the strangers throat. Yaotl and Ren grabbed him.
“What are you doing?” Ren demanded.
“Evil must be removed from the world.” Cyrus coolly explained. 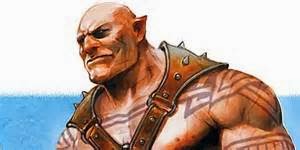 
Yaotl grabbed Nuru, who was in shock, “Let's get out of here. Who knows the way?”

“I know the way.” Cyrus answered, while opening a dimension door.
The group moved through the dimension door and appeared outside, in the daylight.
Rata healed Ren, Aziza, and Yaotl a bit, then stated, “This is a very dangerous group, I am leaving.”
Then, Rata teleported away.
Cyrus and Aziza set off to find water. Ren used photosynthesis. Yaotl sat on a rock and nursed his many wounds. The group ate and slowly began recovering. Ren eventually laid down to sleep.
Yaotl cast detect evil and studied Cyrus. He discovered that Cyrus was not evil, not was the headdress he was wearing. After Cyrus removed his headdress, and laid down to sleep, Yaotl detected evil again, and determined the gem in his forehead was not evil. However, Yaotl could detect something evil near Cyrus, but could not locate it.
Yaotl told Ren that something near Cyrus was evil and may be controlling him. Ren and Yaotl had a philosophical discussion about evil and if items can be intelligent. They then discussed what to do if they did find an evil object.
Yaotl then told Aziza about the evil near Cyrus and Aziza suggested that he detect magic. Yaotl did so and saw an overwhelming magical aura coming from Cyrus' backpack. Yaotl told Aziza what he saw and convince her to wake Cyrus. Aziza woke up Cyrus.
“There is something evil in your backpack.” Yaotl explained.
Cyrus looked around, “I detect no evil.”
Yaotl lunged for Cyrus' backpack, but Cyrus teleported away. Aziza woke Ren and told him that Yaotl scared Cyrus away. An argument ensued, Aziza accused Yaotl of overreacting, after all Cyrus only killed a defiler. Yaotl demanded that Ren and Aziza believe him that something evil may have an influence over Cyrus.
Cyrus returned a short while later and asked why Yaotl tried to rob him. Aziza calmly explained what Yaotl was doing and convinced Cyrus to, reluctantly, let them search his backpack.
Yaotl and Aziza poured out the contents of his backpack and, without touching anything, separated them into piles. Cyrus told them that he preferred to stay somewhere safe and teleported away again.
Two items were immediately suspected by Yaotl and Aziza, a small copper ingot and a single leather boot.
“Why would someone keep a single boot?” The both wondered aloud.
Ren psionically contacted the gem in Nuru's forehead and found himself standing atop a broken ziggurat, looking out over an empty city. The city was constructed in a bowl.
“A crater?” Ren wondered.
The sky was black. He called out, but there was no reply. He tried to move, but his feet were fixed to the top of the ziggurat. He punched the floor and it broke away like thin ceramic. Beneath him was blackness. He could feel power pulsing up from below him. He dared not touch it and he broke mental contact with the gem.
Yaotl detected evil on the backpacks items and found no evil. Yaotl and Aziza worried that Cyrus took the object with him. Everyone laid down to rest. Cyrus teleported back and he and Aziza talk. Aziza calmly talked to Cyrus about their concerns and returned his backpack. Cyrus took a ration out of his backpack and set it aside.
Cyrus talked to Aziza and told her about the orb. He explained that he buried it in the cave and they should seal the entrance to make sure no one ever finds it. Yaotl detected evil again studied Cyrus. He found no evil. Aziza told Yaotl about the orb and they all agreed that must have been the cause of the evil. They shared a group hug. Cyrus decided to stay and sleep.
Ren was keeping watch and investigating the entrance to the cave, when Yaotl started convulsing on the ground. His shaking woke up Aziza and Cyrus. Without hesitation, Aziza rose and grabbed her tortoise blade. She grabbed Yaotl and flipped him over. She ripped the back of Yaotl's shirt open and everyone saw what Aziza knew would be there, an agony beetle.

Using her tortoise blade, she sliced the agony beetle, and part of Yaotl's flesh, off. Yaotl passed out, but Cyrus quickly healed him.
Ren set out to find a more secure place to sleep for the night. Ren found a naturally occurring alcove in the canyon walls and the party moved inside. Ren investigated Nuru's gem again, but discovered nothing new. The group slept and Ren kept watch.
The night passed without event and the group awoke refreshed. Yaotl's ripped shirt was whole again. They set out to find water and food. Those who did not, or could not, find water had Cyrus create it for them. Then, they set out, back toward Nibenay.
“What will your house do to you?” Ren asked Nuru.
Nuru hung his head, “They will kill me.”
Ren seemed troubled, “You could renounce your King.” He suggested after a moment.
Nuru shock his head, “I will not. I work to free my King, he is imprisoned.”
Ren walked on, deep in thought.
The group began discussing the possibility that the King Nuru follows, Kalid Ma, is a good king. Nuru declared that he is, but the group doubted his word. Yaotl brought up the fact that Kalid Ma had no problem with a defiler working for him.
“What's wrong with defiling?” Nuru asked, puzzled.
Yaotl punched Nuru, breaking his nose. “Hold your tongue while it's still in your mouth.”
Nuru, seeing the angry looks on Yaotls and Azizas faces, wisely took his advice and stayed silent.
They continued marching and the sun eventually sunk below the horizon. Ren found a large, empty cave. The group went inside and Ren rolled a large rock in front of the entrance.
Ren suggested that they free Nuru, upon returning to Nibenay. Yaotl agreed, Aziza did not care, but Cyrus objected. After a brief discussion, Ren and Yaotl decided to ignore Cyrus' protest and release Nuru when they returned to Nibenay. Nuru, naturally, agreed.
Yaotl kept first watch, followed by Aziza. Cyrus woke and insisted on keeping watch. Seeing that they were in a secure area, with an extremely low likelihood of something sneaking up on them, she agreed and went back to sleep.
An hour later, Nuru awoke and whispered quietly to Cyrus, “Chosen, if you would have me, I will serve you.”
Cyrus looked down at him in contempt, “I need no servants.”
An hour later, Aziza and Ren awoke. They decided to let Yaotl sleep a little longer. Ren moved to the mouth of the cave and began rolling away the large stone.