The vision ended with Kalak waving his hand and shattering the gem. When the vision was over the gem remained, un-shattered, on the pedestal. The group paused, taking in what they just saw.
They began discussing the ramifications of what they just saw, if the vision were real. How old is Kalak? Was he King of Tyr back then? Why did he kill the ogres? They had no solid answers.
Julius took the gem from Alaxander and inspected it. He told the group that the gem must be the fabled Gem of Ultimate Psionic Power, which granted it's user unlimited mental energy and near invulnerability. Vashti doubted his claim, believing that the Gem of Ultimate Psionic Power was just a myth, but the other members of the group seemed quite impressed.
Julius used the way to mentally contact the gem and was disappointed to discover that he had been mistaken. The gem did give access to a respectable amount of mental energy and the psychometabolic ability of cell adjustment, but did not grant near invulnerability. He also discovered a rudimentary intelligence inside of it, an intelligence that was filled with sorrow. Julius was able to discover that the intelligence was one of seven. He tried to question the intelligence further, but could only feel its pain and sorrow at being destroyed and separated from itself. He put the gem into his belt pouch.
At Vashti's prompting, they started searching the room. Jessel searched one of the bookcases, as did Vashti. Julius started searching the pedestal and found small gaps in the concentric rings that made it up. This lead Julius to believe that the pedestal could be pushed downward. Julius tried to push, but it wouldn't budge.

Julius asked for assistance, so Jessel, Kalino, and Shade all pushed down on it together. It moved ever so slightly, but seemed to be very stuck. Alaxander joined in, pushing with the way. Julius tried to push with the way, but ended up giving himself a headache instead.
It worked and the concentric rings pushed into themselves and continued into the floor. A hidden staircase was discovered. Julius took Kalino's torch and was the first to descend into the darkness. He entered a stuffy, stale, and dusty circular room. Curving on the far area of the wall where four doors of petrified wood and bound with rust. Kalino and Shade followed Julius close behind.
Shade went to the first door of the left, planning on searching it for traps, but when he touched it, the door crumbled into dust and debris. The dirt and dust filled the small room, sending everyone into coughing fits. Without waiting for the dust to clear, Shade quickly touched the other three doors and caused them to collapse in a similar manner. The dust was nearly unbearable and it took several minutes for it to clear the area.
Shade entered the first room. It was filled with piles of rust and other debris. Shade was staggered by the amount of rust inside the room and guessed that it had once been an armory, rich with iron weapons. Shade began searching through the piles, hoping to find pieces of iron that had not rusted. Although he did not find any iron scraps, he did find a strange piece of gold wire that was oddly shaped. He put it into his pack without telling anyone.
Julius looked into the fourth doorway and discovered an ancient stone latrine. He left it alone. He then peeked into doorway three and found a large, irregularly shaped room. Inside was debris and shards of bone. Vashti, being curious herself, followed Julius inside and used the way to bone read some of the pieces. It was difficult, but she was able to identify that they were bones of ogres. She identified a young woman and a small child.
After pocketing the gold wire, Shade checked the final doorway. It lead to an ancient storeroom that contained very little in good order. Pottery shards and other rubbish littered the floor. However, he was able to see four sealed ceramic buckets, that were approximately five gallons, and four pint-sized glass jars. Two of the glass jars contained clear liquid and the other two contained blue liquid.
Shade tasted the blue liquid and discovered that it tasted like soapy water. He then checked the ceramic buckets. Three of them contained water and the last contained a thick purple liquid. The purple liquid was thick and tasted awful. He was going to dump it out, but decided not to at the last moment.
They took the jars and buckets out into the hall above. Alaxander attempted to phase through the rubble in one of the collapsed tunnels, but did not find that it provided an exit. He was low on mental energy, so everyone decided to go back to the dais that teleported them there. They discussed staying and regaining their strength, but Kalino suggested the return as soon as possible, to prevent the teleporter from being destroyed, or them being trapped in another way. Everyone agreed.
Shade, Alaxander, Jessel, and Spike went first. As they stepped onto the platform, they vanished. They found themselves back in the tower basement. The staked bodies were gone, but the dais was surrounded by four armed humans, seven armed skeletons, and a Dwarf. Alaxander recognized the Dwarf from weeks ago, when he had rescued him from a ruined keep. It was Abu Talib. Abu recognized Alaxander as well and smiled. It was a warm, welcoming smile.
Abu told his men that it was alright, that he knew one of them. The armed men visibly relaxed. Abu welcomed Alaxander and asked him if he found the gem. Alaxander thanked Abu for his welcome, but denied any knowledge of the gem.
Then, Julius, Kalino, and Vashti appeared on the dais. Abu looked more shocked and surprised. He bid them welcome and told them that he was happy that they were still alive. They were a bit confused to see him, but were happy that they did not teleport into a worse situation. Abu asked again about the gem and almost all of them denied knowledge of it. Julius pointed out to his friends that he had the gem in pouch, did they forget?
Abu was excited and told the group that he had been searching for the gem for years. He offered to buy it, for he had come into quite a bit of wealth since they last met. Julius refused. Vashti asked Abu why he wanted to gem and Abu explained that he was magically compelled to seek it out. She asked for whom he was seeking it and he apologetically explained that he was magically compelled not to reveal that information.
Jessel noticed that Abu did not have a shadow and told Julius in the giant language. Julius asked Abu about it and he said that it was a side effect of the magical compulsion. Abu again offered money or even his assistance with something for the gemstone. Julius again declined.
The group continued questioning Abu, who seemed honest and friendly. He explained that when they first met, he told them that he was enslaved and did not lie. The group believed him, but despite his offerings and straightforwardness, they would not give him the gemstone.
During the discussion, Jessel surprised everyone by casting a hold person spell. The spell failed to hold Abu. Abu looked hurt and disappointed and he ordered the humans under his employ to attack the group, but to try not to kill them. 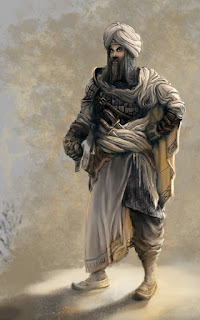 Shade and Spike rushed to attack one of the humans. Abu cast hold person and held Kalino and Julius. Vashti tried to use the way to destroy one of the undead, but the skeleton resisted. Alaxander disappeared with the way. Jessel used divine energy to cause five of the skeletons to flee from his sight. Two of the henchmen ran to attack Jessel and one fired a crossbow at Vashti, seriously wounding her.
Alaxander appeared behind Abu and threatened him with a dagger. Vashti caused the other four skeletons to run. Shade and Spike continued to attack one of the henchmen. Abu walked away from Alaxander and stopped next to the held Julius. Alaxander tried to stab him, but missed. Jessel began fighting off the two men attacking him and Vashti healed herself.
Alaxander ran to help Jessel. Vashti tried to push Abu away from Julius. Shade and Spike were doing their best, but the human henchman was proving to be more difficult to dispatch than expected. Abu reached into Julius' pouch and grabbed the gemstone. Jessel tried to tackle Abu, but Abu was much stronger than expected and Jessel could not knock him over.
While Alaxander, Vashti, Shade, and Spike fought the human henchmen, Jessel kept trying to stop Abu. First, by physically retraining him and finally by attacking him. Shade even broke off of the henchman and attacked Abu. The fought him up the stairs and eventually outside.
Abu used the way to make himself repulsive to Shade. This made Shade fall back and use his bow. Jessel finally managed to tackle Abu, but Abu used magic to force Jessel to stand. Kalino and Julius finally unfroze and were able to hep. Kalino engaged the henchmen, while Julius ran for the stairs. Unfortunately, the fleeing skeletons were upstairs and blocked Julius and the others.
Shade's arrows were not slowing Abu and Jessel could see that Abu's wounds did not bleed. Abu eventually used magic to befriend Jessel. He then asked Jessel to get him out of there, in order to protect him. Jessel readily agreed, completely overcome with magical compulsion. Jessel picked up Abu and began to flee.
It took a few seconds to fight off the skeletons, but by that time, Jessel had run far into the distance. No one could run as fast as Jessel. Alaxander and Julius were too low on mental energy to follow, or attack from a distance. The group was dismayed at their failure. Abu not only got the gemstone and got away, but he had also kidnapped their friend. The worst part was, they couldn't even blame him.

Join us in one month for another exciting session of Adventures Under the Dark Sun. (Sorry about the extended time between sessions, but I'm going on a work trip.)