The Legend Of Ort the Druid

In a previous campaign, my player's visited a small village in the wastes of Athas and were told this tale by one of the village elders. I thought someone might enjoy this tale, hopefully it's you. 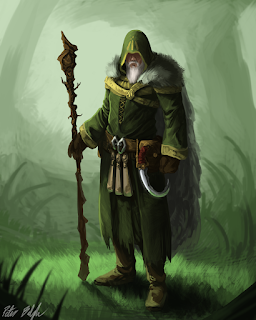 The Legend of Ort the Druid

Many years ago, when the trees of the forest were saplings, a young Elf druid named Ort lived in a lush grove. Ort spent his days protecting his grove from savage monsters and evil men.
One day, a young man entered the grove. Ort watched the man from the shadows of an agafari tree. When Ort saw the man's face, he nearly let out a gasp for the man was hideous to look upon. The ugly stranger wondered about the grove, examining the flora. Ort watched the man reach his hand toward the ground and saw energy flow into the man's hand. Ort knew something was wrong and stepped from the shadows to stop him. The hideous man looked at Ort and Ort saw only hatred in his eyes.
“Stop.” Ort ordered.
The plants around the monstrous man began to wither. Ort's eyes grew wide in shock as the plants turned black and crumbled to ash. Ort raised his agafari spear and prepared to attack. The horrid man pointed a finger at Ort and uttered an incantation. Fire erupted from the man's finger and engulfed Ort. Ort fell to the ground as the fire burned his cloak and the plants around him.

“What sort of evil is this?” Ort wondered as he stregained his feet, ignoring the burning pain.
The corner of the repulsive man's mouth turned up in amusement. Ort called upon his land to grant him the magic he would need to drive the man from his grove. Ort saw, in his mind's eye, a huge lizard clawing it's way through his grove. Ort quickly realized that his mind was being invaded and he rose a large bramble wall to protect it. The lizard battered the wall with a swipe of it's claw. Ort was horrified. Ort was not trained in the use of the Way, but knew how to protect his mind from those who were. The destruction of his defenses was so simple that Ort knew he was not dealing with a practitioner of the Way, but a master. Ort tried in vain to drive the master from his mind, but was quickly overcome. Ort again fell to ground as his mind was ravaged. Blood spilled from his nose, mouth, and ears.
Ort silently called out to the spirit of the grove. “Help me!"
Just as the master reached a deformed hand toward Ort, the ground responded to his cries. The ground rose up, into the form of a man, and fell upon the foul master. The beastly man proved to be stronger than he appeared, for he burst from the ground. Ort could see that the land's attack and taken a toll on the stranger, for he appeared haggard and less confident. As the land rose to attack again, the monstrous man fled from the sacred land.
Many years passed and Ort almost forgot his brush with death. Only a small patch of sand reminded him of where the hideous stranger had absorbed the life force of the plants. Ort grew old in body and grew great in power. His lands had been kept safe throughout his life and he had trained others, so that his land would be protected after he joined with Athas.
On a warm spring day, Ort found himself relaxing among the branches of an agafari tree. The sun shined down upon him and Ort took comfort in it's warmth. Ort's relaxation was interrupted when he sensed someone enter his grove. Ort peered down from the tree and was startled to see the interlopers hideous visage. Ort stealthily climbed down from the tree, praying silently that his students would not come across the intruder.
The trespasser wasted no time. He waved his hand across the ground and the plants around him immediately began to turn black and crumble to ash. Ort dropped to his hands and knees. Ort's clothes became fur, his hands became claws, his spine extended to become a tail, and his mouth became a muzzle. Ort launched himself from his hiding place, preparing to kill the man as quickly as possible. The fearsome man pointed a single misshapen finger at Ort and uttered a single word.
“Hold.”
The man stepped to one side as Ort's body came crashing to the ground. Ort heard his students approaching, but could not speak to stop them. Ort was forced to hear the cries of his students as they were attacked by the man's foul magics. He was forced to endure the suffering of his land as the ground beneath him was drained of it's life force and all the plants turned to ash.
Ort's eyes filled with tears and he again turned to the spirit of his land for aid. Ort found himself being turned over as the ground rumbled in response to his cries.
“Thank you.” said the appalling man. “You have called fourth the life force of this land and I will use it.”
Ort tried to close his eyes as the repulsive man laughed a foul laugh. He reached toward the rising land mass and Ort witnessed the life energy of the very spirit flow into the evil man's hand. The land's spirit cried out in pain.
The disfigured man pointed at Ort with his misshapen hands. “Kill.” he whispered and Ort died.