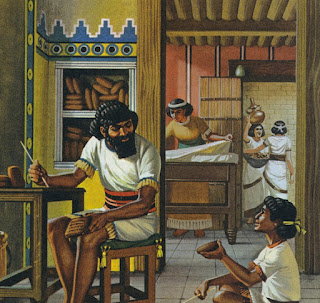 The group ate a meal in Ziad's home, with his family. He had a wife, Shala, whom they knew, and two sons. Salim joined them as well. Both of the boys were fascinated by the type of creature Vashti was. Vashti explained that she had been cursed. The boys parents quieted them before they could ask more questions.
The group thanked the family for their hospitality and set up their sleeping arrangements on the families large main room rug. The family retreated to their rooms, with Salim sleeping in the kitchen area, away from the group.
Julius stayed awake to keep watch and woke Shade after his watch was up. Shade waited until Julius went to sleep and then went back to sleep himself.

Upon waking, Vashti preached her sermon and summoned water. Zaid and his family were amazed and gladly took the water Vashti offered them. Zaid and Salim left for work and most of the group departed for the city. Julius stayed behind to carve weapons from some tari bones he was carrying.

Outside, Kalino told the group that he had personal business in the city to address and turned down all offers to accompany him. Vashti, Alaxander, and Shade then went to the market district to browse for various items, but did not purchase much. They did have all of their gemstones and art objects appraised and received tokens from the appraiser certifying their worth.
Shade, Vashti, and Alaxander passed the silver wheel and remembered that they had made promises to themselves about paying the head chefs slave debt. They made plans to visit the restaurant that evening and returned to the home of Zaid. Kalino had not returned.
Shade, Vashti, and Alaxander invited Julius to come with them to the silver wheel, but Julius declined. Shade laughed and said Julius was a miser and Julius denied the accusation. Kalino had not yet returned, so they went by themselves.
The silver wheel was as nice as they had remembered and they happily paid for their food and drink. The servers assumed Shade was the richest, as he had the nicest clothes, and directed their attention to him. Vashti's strange appearance was explained away as a curse and ceramics kept anyone from having too many issues with her.
They enjoyed the many dancing girls and tipped them generously. Then, it came time to free the chef. They called him out to compliment his cooking. Then, they presented him with a silver framed mirror of superb quality and the appraisal certificate indicating it's worth. The value of the mirror was enough to free the chef and grant him some extra money also.
The chef cheered for joy and told the group that he would use the extra money to open his own restaurant. He then invited the group to come to his restaurant at any time and eat for free. He then rushed out of the restaurant to seek a templar.
The owner of the restaurant was very upset that he was going to have to buy a new chef slave. Feeling good about themselves, the group paid their tab and departed. They walked back to the home of Ziad with no problems.
While the group was at the silver wheel, Julius was out trying to sell his two newly crafted bone short swords. He was not dressed nicely, so many passersby thought the swords were stolen. In addition, Julius refused to take trade, he only wanted coin. After a couple of hours, he was finally able to sell one of the swords. He then returned to Ziad's home and was asleep before Shade, Vashti, and Alaxander returned.
Kalino arrived just as the group was starting to worry. He told them he was fine, but tired. He went to sleep, leaving the group with silent, questioning glances. 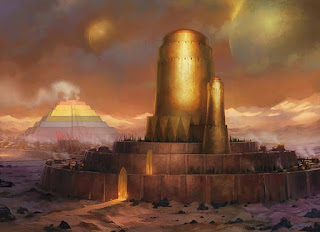 They were awoken by a voice inside their heads. The voice said that it would assist. They then heard the voice of Abu saying hello. They tried to talk back to him, but suddenly found themselves in Tyr.
They looked around and the streets were littered with bodies. Slaves, templars, and common men had collapsed on the ground and died, with no apparent cause. They then heard Abu's voice again.
"This is my former master's plan. You freed me, so this is what I shall give you in return. Farewell my friends. Farewell."
The group woke back in Ziad's home. They looked at each other and knew that it had not been a dream. Vashti was the first to speak, suggesting they leave as soon as possible.
They gathered up their things and went to the market district to get the items they were having resized for them and other last minute purchases. Kiara returned in her traveling clothes, along with new armor and traveling supplies. They bid Ziad's family farewell and they departed.
Using the way, Julius connected his mind to Vashti's and Alaxander's. Vashti then used the way to look a great distance south. She spotted a fortress of some kind. Alaxander remembered the fortress from when he fled Balic. Alaxander then used the way to open a large dimensional gateway and the group stepped through
They found themselves outside a large mudbrick fortress. They were spotted by the guards on the walls and bows were drawn in their direction. One of the guards recognized Alaxander and invited him inside. Alaxander declined and the men inside the fortress insisted.
The group ran south. Alaxander was shot at by the guards, but they missed. Alaxander asked the lord of the mind where the next crystal was and the lord of the mind told him far to the south west. Alaxander opened another large gateway in that direction and the group ran through.
The group emerged into an area of rocky badlands. Alaxander was mentally exhausted and needed to rest. Shade found a shady area to rest in and the group relaxed, saying this was the easiest trip they had ever taken. Alaxander began to meditate.
While Alaxander was meditating, Shade decided to go hunting. He found a herd of wild baazrag and sneaked up on one. He killed it with a well placed arrow and tried to claim another. However, he had already been spotted by the rest of the herd and they stampeded away.
Shade field dressed the creature and brought the meat, shell, and water sack back to the group. The group complimented Shade on his hunting skills. Kalino salted the meat for transport and Alaxander announced he was ready to continue on.
Julius used the way to link the minds of Vashti and Alaxander again. Vashti was shocked when she followed the lord of the mind's directions. She and Alaxander saw a beautiful oasis on the edge of a salt flat, with a ruined city beyond. Alaxander opened a gateway to the oasis. 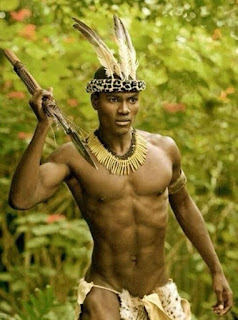 Upon arriving, the group marveled at the abundance of greenery and the cool breeze that rolled off of the water. Vashti inspected the oasis and deemed it safe to drink. However, before any of them could refill their waterskins, a group of dark skinned humans moved quietly from the underbrush. They had stone tipped spears at the ready and did not look friendly.
The group tried to explain that they were friendly and did not want to fight. One of the men stepped forward and asked them in balican if they spoke balican, which they did. He was one of the druids of the oasis and said there were four others. The other druids protected other areas of the oasis, but what he was most fascinated with was Vashti.
He wanted to know all about what she was. She said she was cursed, but the druid said that she was blessed, not cursed. She told him that she was a water cleric and he was pleased to hear it. He said his name was Hakim and Vashti introduced herself and the group. Hakim said they were welcome, as long as they did not harbor a defiler or harm the oasis or the plant life.
The group relaxed in the grass and under the lush palm trees. The people who lived there ignored the group, for the most part, and that suited the group just fine. Kalino did continue to train Alaxander and Shade in the use of the spear. Vashti talked with and exchanged stories with Hakim.
Vashti told Hakim that they had to cross the salt flat and go into the ruined city beyond. She told him that they were seeking an artifact to destroy the Tyrant of Tyr. Hakim told her that the ruins were called Kalidnay and his people did not enter them. However, at night undead often came from that direction and they were forced to fight them.
Hakim and Vashti became fast friends and they quickly grew to trust each other. Hakim gave Vashti some potion fruits, two healing, a remove fear, and an enlarge. He also gave her a scroll of cure light wounds to assist her in their quest. She thanked him profusely.