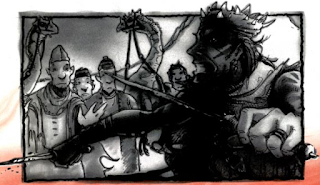 As the elves drew their weapons, they began calling an alarm. Julius and Kalino leapt forward and cut some of the slaves free, but they were confused and afraid. Alaxander yelled at the slaves to go through the dimensional portal, while attacking an elf with the way. Shade attacked the same elf and was able to drop him. Vashti used her minimal combat magic to engage the elves.
Unfortunately, more elves ran into the building and began fighting with the group. Vashti felt part of her body turn to ash, as an elven defiler cast a fireball spell. The spell managed to strike every member of the group, but killed quite a few slaves as well, including some children.
This act infuriated the group and they all directed their attacks toward the defiler. After he died, the group started pushing the slaves through the large dimensional portal. After a little while, the elves decided that the fight was not worth the slaves and they fled.
The group went through the portal, which lead to an open area near their temporary home in Nibenay. Once the group was certain that none of the elves followed them through the portal, and Kiara joined the group, Alaxadner opened another portal to Kuresh. They went through, taking the slaves with them.

Back in Kuresh, the group declared that all of the slaves were free. They then introduced the former slaves to Sharra and Kazim. Kazim offered membership in the tribe to any of the former slaves. Acceptance would mean freedom, but they would have to swear a loyalty oath to the village. One of the former slaves refused, so he was executed.
The group was shocked by this, but Kazim explained that the location of the village must remain a secret, if they are to survive. Kalino suggested that, in the future, the group should take freed slaves elsewhere and ask them about joining the tribe, before going to Kuresh. The group agreed. 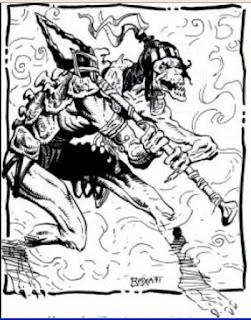 In the morning, Vashti preached her sermon and everyone ate at a communal breakfast. The group had a discussion and decided that finding Fort Isus would be their next best course of action. They knew that Samir Karam was from Raam, so it was a possibility that Fort Isus was on the road from Nibenay to Raam.
Vashti began searching the Nibenay-Raam road, using the way, from a bird's eye view. She saw a destroyed settlement, but it did not look like a fort. Then, she saw an armored caravan traveling north, and finally, she found a fort. She had no idea if it was Fort Isus.
Vashti informed the group about what she had found. The group decided to go to the fort. Even if it wasn't Fort Isus, they could purchase supplies for Kuresh. Taking the gith family with them, the group used the way to travel to the fort.
The fort was flying a red flag with a silver writing quill. Not a single member of the group knew the organization's symbol. The gith thanked the group for returning them to their tribe's area and jumped away. Vashti, Shade, and Alaxander went to the fort's open doors and asked the guard what fort this was.
The guard replied that it was Fort Isus of House M'ke. The group were very pleased with themselves. They entered and went shopping for supplies. They also purchased some new clothes. Shade bought a silk scarf for Kiara. 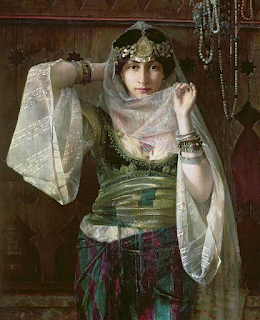 Then, they tracked down Zaina, who was a very lovely human woman. Vashti and Shade bought her food and drinks at the small fort tavern, then they bribed her with coin. Zaina explained that Samir was afraid of the gith and thought they were planning something big.
He was looking for some insurance to use against the gith, but did not go into much detail beyond that. He had been travelling south, toward Nibenay, and had not made the return trip yet. She also informed them that Samir worked for House Tsalaxa.
The group went to the outside of the fort and saw a tribe of thri-kreen arrive to trade. They did not interact with the kreen and sat in the shade of the fort's walls.
In the evening, the group saw an armored caravan approaching the fort from the south. It flew black flags with yellow bestial yellow eyes on them. Vashti thought that was a symbol of House Shom and told the group that the wagon was likely not Samir's.
After the wagon stopped and one of the traders emerged from it, Vashti  approached. She asked about House Tsalaxa and Samir. The trader claimed to not know much about either subject. She purchased some rice from the trader and loaded it on the group's kank.
Alaxander opened a dimensional portal and the group moved their kank through. As they were passing through, they complained about how they somehow missed Samir. Vashti was the last in line and was about to step through the portal, when suddenly Zaina ran up to the man Vashti had been talking to. She threw her arms around him and kissed him.
As Vashti watched, Zaina was speaking to the man and then began pointing in the direction of Vashti and the portal. Vashti stepped away from the portal and began walking toward Zaina and the man. Suddenly, the man looked alarmed and pushed Zaina away. He then ran into the armored caravan, closing the door behind him.