Why Dark Sun is my Favorite AD&D Setting

I was talking to a friend of mine about our favorite D&D settings and I began teasing him about his favorite, Forgotten Realms. I pointed out that it was too easy, with good epic level NPCs, safe cities ruled by good kings, and flowers that don't try to kill you.
"Why adventure at all?" I teased, "Elminster and that Drow guy can take care of it, right?"
He laughed it off, corrected me that the Drow guy was Drizzt, and then asked, "Well, what's so great about Dark Sun?"
I told him I loved the harshness of the setting. That every city is ruled by a tyrant, slavery is rampant, water and food are scarce, and that heroes in Dark Sun are the most heroic, because there's no eternal reward for being good.
We then moved on to other topics, but I wanted to expand on what I told him and try to convince other RPG fans to give Dark Sun a try.

The first thing that I noticed when Dark Sun was introduced to me was the Cover Art, and some of the inside illustrations. Brom did an amazing job coming up with the look of Dark Sun. Words cannot describe it, so I post some of the black and white promotional art. 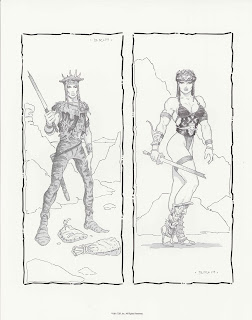 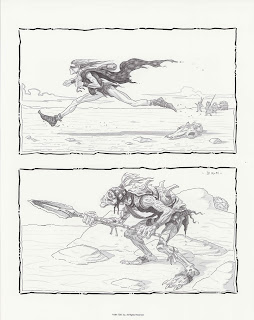 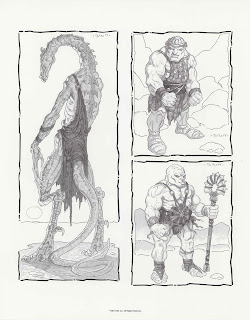 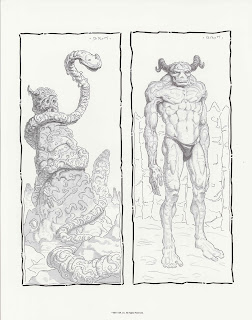 The artwork was so different from other fantasy games that it intrigued me. The color art, reserved for the covers, is even better. Unfortunately, Brom did not do all the artwork for the campaign setting. Thomas Baxa did quite a bit of the artwork in later books and his work was rather hit and miss with the quality. However, it was too late for me, I was hooked by the Brom artwork.

Secondly, I enjoy the harshness of the setting. Finding food and water is not just something to be glossed over, it can take half a session, or more, to make sure your character doesn't die of dehydration. Food is easier to find, but most of the animals and plants are deadly in their own right. Even small creatures have poison or razor sharp scales. Cactus will try to kill you and drain your fluids, and flowers will shoot you with a laser. Yes, laser flowers.
What makes it even better is that metal is scarce, so the weapons you wield do less damage and are prone to breaking. It's actually helpful to carry a backup weapon, just in case. Metal armor is scarce and dehydrates you even faster. In addition, wizards are hated and killed on sight, also clerics don't get high level healing spells.
There is no safe haven. In the original box set, the cities are ruled by tyrannical sorcerer kings and queens. Their templars will enslave you or send you to do battle in the gladiatorial arena for any real or imagined slight. If you're a wanted criminal, you'll be turned in for the reward, because people are starving. Even small villages are commonly overrun by raiders or sandstorms. They're also commonly ruled by mini despots, who kill or enslave anyone who challenges them.
The harshness may seem over the top, but it makes surviving a real goal and when accomplished, a triumph. It also requires the players to think about how to defeat a monster, group, or even travel a long distance. Trusting in your weapons and armor, and your clerics ability to re-attach your limbs is not the best course of action with Dark Sun.

Thirdly, heroes in Dark Sun are the most heroic, because there is no eternal reward. Dark Sun has no real Gods, no Heaven, and no Hell. Gods are false, like the sorcerer kings and queens, or myths and legends. When you die, you go the Gray. Everyone goes to the Gray. It doesn't matter if you were the kindest and most benevolent person on the face of the planet or the meanest and most cruel. Therefore, heroes have no real reason to be heroic, except that they are genuinely good people that want to improve the lives of others.

Fourth, the heroes can change the world. In many other campaign settings, the players are generally trying to keep the status quo from being disrupted. Goblins or Orcs attack a settlement and the heroes are tasked with trying to stop it and return everything back to normal. This is not the case for Dark Sun. The status quo sucks and the heroes should be trying to change it for the better.
After years of playing, you can look back and see your characters accomplishments. You can see how your character has changed things for the better and feel a real sense of accomplishment.

Do you agree with my reasons why Dark Sun is my favorite setting?