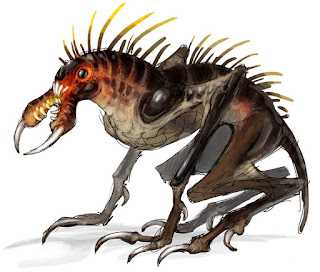 The Tilarak is a lizard with insect like characteristics. Tilaraks are a foot long and travel in pairs or packs, usually with a single male and multiple females. They are active during all parts of the day, but most often in the morning or evening.
Tilaraks have spines along its back that inject a mild poison into predators that bite or grab it. It has powerful jaws, for its size, and are able to bite off a medium-sized creature's toe or finger quite easily. Tilaraks usually feed on creatures up to size small, but may attack a larger creature if food is scarce and the pack is large.

Tilaraks live in rocky badlands and stony barrens. They hide in the rocky crevices, waiting for prey to appear. Tilaraks use swarm tactics to attack anything larger than themselves and will eat any creature other than kank and fordorran.

Combat
Tilaraks bite with unusually powerful jaws for 1d6 damage. If a Tilarak rolls a critical hit with their attack roll and their victim does not have covered hands or feet, the Tilarak has either bitten off a toe or finger. Roll a d6 to determine effect, 1-3 Finger, 4-6 Toe. Then roll a d10 to determine which appendage is removed, starting from the left. For example, a 7 on a d10 would indicate the right pointer finger, or second toe on the right foot. The DM is free to adjust these rolls.
During the first round of Combat, Tilaraks may make a leap attack if their target is further away than ten yards. Leap attacks allow the tilarak to move up to twice their movement rate and attack with a +2 bonus.
The tilaraks ridge spines inject a mild poison to any victim who touches them. Unarmed combat attacks against a tilarak have a 25% chance of striking a spine. The poison is type K, but with an instant onset time.

Habitat/ Society
Tilarak packs are made up of of male and multiple females. The male tilarak will drive away all other males, fighting to the death if necessary. Both females and the male will attack prey and use the same statistics.
Tilaraks can be active at any time, but prefer to be most active during the evening and morning hours. They will scavenge if necessary, but prefer fresh meat.

Ecology
Tilaraks make three times per year, around the time of the festival weeks. A male with breed with up to ten females in his pack. Females will lay 1d10 eggs ten days later. The females with bury the eggs in loose soil and abandon them. The eggs will hatch in sixty days and young tilaraks look like small adult tilaraks, but have no spines and much smaller jaws. They will feed on whatever organic material is available, until they reach their full adult size in one month.
Adult tilaraks have little edible flesh, but two of them can feed an average medium sized creature for one day.