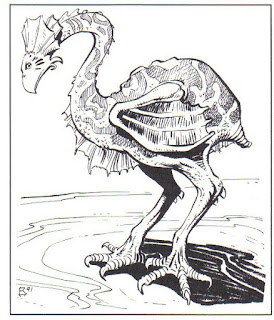 Plot Summary: Near Nibenay (or any city state with scrub planes nearby) lived a poor erldu herder named Roget. Roget lost most of his herd to sickness and has a single erdlu left. Roget named this erdlu Tongo. Roget loved to sing and play the flute with Tongo nearby and Tongo always seemed soothed by the music.
Tongo spied a female erdlu with her owner in another field one day and dragged Roget over to them. Roget met Enita and her erdlu, Kirdeta. Roget and Enita fell madly in love, mainly because there are few choices for erdlu herders. Enita had almost all of her teeth and Roget didn't smell that bad, so they soon built a hut and herded erdlu together.
It wasn't long before Kirdeta started laying eggs. Now, Enita's old friend came to visit her. She's a merchant named Humilda Diablo. She wanted to know when the erdlu were hatched. Roget doesn't like Humilda, but Enita assures him that she's harmless.
Eventually, the eggs hatched and the herders now had fifteen healthly erdlu chicks. Humilda returned and offered to buy them all for half of what they were worth. Roget refused. He wanted to rebuild his herd and could not do it with such a paltry sum. Humilda left their hut in a furious state.
A few weeks later, when the erdlu chicks were old enough to survive without their mother, Roget and Enita took Tongo and Kirdeta out to forage. While they were gone the pen was broken into by two thugs, Jast and Horak, who stole the erdlu chicks. Roget suspects Humilda, but does not have the resources to go after her.
This is where the player characters enter the adventure.

I hope you all have a happy April.