Session Twenty-Three: The Power of The Way 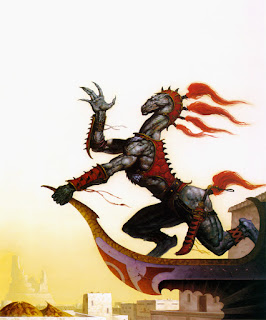 The group awoke inside and outside Serena's small hut. It was quite crowded with Serena, her mother, Aamina, the five children, and the six adventurers all having farro porridge and dried sand crocodile for breakfast. Serena gave Alaxander the largest helping and kissed him on his cheek.
Vashti and Shade thought they should get their map translated, but Julius convinced them that it would be wiser to not let too many people know about the map. They decided to leave Tyr just after high sun, but first they needed to make sure they had enough water. Shade also needed to pick up his repaired armor and he wanted to buy some new nice clothes to go with his boots and cloak. They also decided to sell one of their wagons, but keep all of their animals.

They paid to get into the city, including paying to take trade goods into the city. They went to the marketplace and purchased water. They sold their wagon and some other things for a modest sum of ceramic. Shade bought a nice shirt and short pants to improve his appearance. He thought about armor for his dog, but realized it would take too long to make. He picked up his armor right before high sun.
Alaxander went to the School of Thought to wait for Utza. When she appeared, he walked to her and smiled. She smiled back and said hello, while playing with her hair. Alaxander thanked her in person for her help and found out that she had been assigned to a new Templar. Alaxander gave her the cracked bloodstone and told her it was worth twenty ceramic pieces. She asked Alaxander what he was doing that evening and Alaxander said they were leaving Tyr that afternoon. She hinted that she wanted him to stay, but Alaxander ignored her advances and parted ways with a bow of respect.
They left the city and returned to Serena's hut to wait out high sun. Serena whispered to Alaxander and tried to convince him to stay, but he said that he had a duty to fulfill and must leave. They packed their wagon and tied their pack erdlus to the rear of it. Vashti asked Aamina if she wanted to go with them, but warned her that it might be dangerous. Aamina decided to stay. With goodbyes to the children, who were sad to see Spike go, the group set off to follow the map. Serena wept.
Alaxander drove the wagon around the fields and through the scrub plains beyond. They steered clear of the herds of erdlu and baazarg. As the sun began to descend, they could see the rocky crags of the badlands up ahead. They decided to camp until morning.
During his watch, when all was dark and quiet, Alaxander heard something moving in the brush and called out. Everyone was awakened by his yell, except Kalino. Alaxander saw a small figure lift a pole to his lips and was struck by a dart in the shoulder. He saw the figure clearly then and yelled to Julius, who was nearby. "Halflings!" Alaxander ran up and tried to stab the halfling with his spear, but missed. 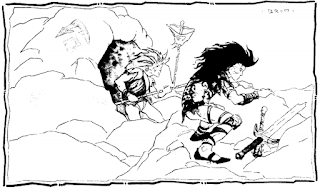 Julius rose and used the way to build up static electricity. Vashti rose and grabbed her club. Shade rose and grabbed his bow. Spike rose and barked. Alaxander stabbed the halfling who had attacked him. This time his blow hit and hurt the halfling slightly. Kalino finally woke up. The rest of the dozen or so halflings revealed themselves and attacked. Alaxander was struck by two more blow darts and was poisoned, he fell unconscious. Julius also fell to the halfling's poisoned darts. Vashti and Jamil shrugged off the poison they were injected with.
Spike charged into battle and bit one of the halfling's heads. He shook the halfling viciously until it stopped moving. Shade fired arrows at the halflings who had attacked Alaxander. Vashti thought to intimidate the halflings by using the way to make herself appear as a wyvern. Jamil struck one of the halflings and wounded it. Kalino got up and grabbed his weapon, realizing that they were under attack. The halflings grabbed Alaxander and Julius began dragging them away. The halflings were not scared of the wyvern at all, if fact they seem enraged by it and rushed to attack. The disguise failed when Vashti was struck and knocked unconscious by their poison. Jamil was struck, but shrugged off the toxin once again.
Spike leaped upon another halfling and tore its throat out. Shade continued to fire at the halflings dragging Alaxander away. Jamil grabbed Vashti and threw her into the back of the wagon. Kalino killed the halfling attacking him. Julius woke up and tried to use the way, but his head was clouded and he failed. The halflings attacked Spike, but missed. Jamil was speared by the halflings and did not resist their toxin this time, he fell unconscious. Kalino was attacked, but resisted their poison. The halflings stabbed Julius, but he also resisted their poison this time.
Spike bit at another halfling, but missed. Shade fired a couple of arrows and wounded one of the halflings dragging Alaxander away. Julius used the way to make himself impervious to physical attacks. Kalino killed a halfling who had attacked Jamil and wounded another. The halflings stabbed Julius with their spears, but it had no effect. They also stabbed Kalino, who failed to resist the poison and fell to the ground. Vashti awoke and called upon her elemental water power to create a floating hammer of water to attack the halflings.
Julius released the kinetic energy he had stored with the way and, with an extra boost of mental energy, was able to kill the halflings attacking him. Spike and Shade killed the final halflings dragging Alaxander away. The halflings started to run away. Before fleeing, one of that halflings sliced off a piece of Kalino's meaty thigh for the road. Vashti continued to beat on the fleeing halflings with the watery hammer.
Shade tried to shoot the fleeing halflings, but shot Vashti by mistake. Alaxander woke up with a bloody muzzled Spike standing over him, looking proud of himself. Julius ran toward the halflings and used the way to detonate the ground beneath three of the fleeing halflings. The ground erupted into shards of jagged stone and sliced the halflings to death.
Vashti, Shade, and Julius finished off the last halfling. Vashti gave Shade back the arrow he had shot her with and then healed Kalino. Kalino and Jamil woke up and were happy to see that the halflings were dead. Alaxander went back to watching, while everyone else went back to sleep.

The vultures were feasting on the halfling corpses in the morning. Kalino made some dried sand crocodile and rice for breakfast. The group sought out water with little success and Vashti preached a sermon. They packed up and set out, following the map into the rocky badlands. The canyons twisted and turned. Shade lead the group, seeming to be an expert on navigating the narrow crags.
When the group stopped during high sun, it was apparent to Shade that they were lost. He didn't mention it to the rest of the group. He started leading them after high sun in a direction he thought was correct. They came upon a large group of elves blocking their path. The elves welcomed the group and said they would grant safe passage for a small price; all of their water.
Vashti did not understand the elves, but tried to talk to them. They did not understand Nibenese and just stared at Vashti with confused looks. Alaxander tried to placate the elves with meat instead of water, but the elves politely refused. Seeing that the elves were readying their bows and not open to negotiation, Julius prepared himself to fight. He told his teammates to get ready and put his hastily thought out plan into action. 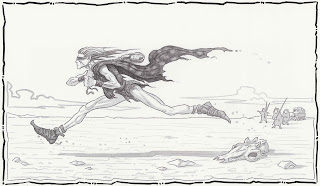 He used the way to detonate the ground beneath one of the canyon walls. Rocks and boulders tumbled down from the cliff above and buried a large portion of the elves. Kalino charged forward with his obsidian khopesh and cut one of the remaining elves down. Shade fired some arrows and wounded another elf. Spike ran forward and tried to bite one of the elves, but the elf was too quick. Vashti summoned a water hammer again, but the elf dodged the attack. The elves fled down one of the canyons and disappeared.
Shade continued to lead the group, getting more and more lost. When the sun was setting, they saw the canyon opening into a wide area. They exited the badlands into an area of scrub plains and could see Tyr in the distance. Shade had lead them in a circle. They decided to camp in the mouth of a canyon. They set up their bedrolls and chose their watch rotation.
They slept and were not disturbed.

The group woke up and Kalino fed them yucca fruit and dried rat meat. They packed up and went back into the canyons of the rocky badlands. Shade assured the group that he now knew which way not to go and the group had no choice but to believe him.
They navigated the canyons for hours untroubled and waited out high sun using their cloaks for protection. A few hours after high sun, some began to murmur that Shade had got them lost again. However, as the sun was touching the horizon the canyon opened onto a scrub plain that the party did not recognize.
A group of a dozen raggedly dressed humans were running toward them. The humans had no weapons and did not have angry looks on their faces. What they could see on their faces was fear.