Not too far west of the Balic to South Ledopolous road is a small village called Red Obelisk, named after the strange rune-covered monument of red stone that juts up from the ground in the village. The monument is next to a spring, which provides water for the village. I have been to Red Obelisk many times to acquire gemstones and livestock. Although the village is home to humans and dwarves in equal numbers, I have asked a human inhabitant of the village to discuss it and the harmony that the inhabitants have seemed to find with each other.

My name is Straton Floros and I am one of the chief merchants of Red Obelisk, the village of my birth. The village is found on the border of a salt flat, nearly due west of Balic. The village was settled about ninety years ago by a group of escaped human and dwarf slaves. They decided to settle here due to the spring that flows up from the ground near the obelisk. Today, there are forty-two dwarf, thirty-six human, and three mul residents.
We trade with merchants from the city-states and with desert dwellers who brave the harsh depths of the wilderness. Dwarves are integral to the maintenance of the village and the commerce that allow us to survive. While the scrub plain is fertile enough to raise livestock, it is not healthy enough to grow an abundance of produce.
If it wasn't for the dwarves, it is unlikely that the gemstones we trade with the merchants and tribes of the wastes would have been found. Due to their strength and endurance, the dwarves are far better at digging up the valuable stones from the stony barrens nearby. Many visitors believe that the humans of Red Obelisk are some sort of masters over the dwarves, because the dwarves often do the hardest of work, like mining, while the humans often do physically easier tasks, like herding. However, everyone is fairly compensated for their work, which often means the dwarves have greater riches than the humans, since their work is much more labor intensive.
None of the original human founders are still alive, but there are several dwarves that remember the founding. Two of these dwarves, Taine and Welch are the oldest dwarves and aid the human, Cael, in administration of the village. They mainly look over trade, justice, and make sure everyone is fed and watered. Taine also serves as the Uhrnius, which organizes the villages guards and hunters.

Clothing in Red Obelisk is very utilitarian. We simply don't have the time or resources to waste on fashion. Balic has the most obvious influence on our clothing, with all sexes wearing a chiton with a rope belt or shash and sandals. Miners wear boots and bone helmets and herders wear wide brimmed straw hats. The village has four sets of leather armor, two human sized and two dwarf sized, that are altered for the most skilled in the use of the spear.
Our architecture isn't as grand or impressive as Balic, or even South Ledopolous. All of our buildings are made of stone with hide or thatch roofs. None are more than a single floor. We have built homes, an inn, and two small warehouses. All of our buildings look the same, although some appear more crude and others more finished. All of our buildings share, at minimum, one wall and our village forms an irregular pentagon, with one open side. This saves us on having to build an outside wall for protection, but does make expansion a bit tricky.
Welcome visitors may find Red Obelisk quite boring. We have no taverns or brewers in the village and most of our time is spent working. We are shrewd traders and know the value of our merchandise, so travelers looking to swindle us will be disappointed. We have an inn, of sorts, with piles of hides for beds and thatch screens we can set up for privacy. The inn is only in operation when visitors are present.
Visitors to Red Obelisk might find the fact that dwarves and humans live close and sometimes cohabitate unusual; I've noticed strange reactions on visitors faces. I must include that this is not unusual for us at all. It is best to keep any rude comments about this arrangement to yourself, lest you find yourself not welcome in our village.
The obelisk is ancient and covered in pictographs that we don't understand and have failed to decipher. Some believe that the obelisk is what purifies the water, or raises it to the surface, and allows us to settle here. Others think it's just an abandoned ruin from a time long ago and many believe both. Either way, we all agree that it should be left alone, lest we somehow ruin our cool water spring. For this reason, we keep a guard watching over it and the spring at all times.
Everyone in Red Obelisk is taught to use the spear from a young age and is expected to defend the village if attacked. Every adult is part of the guard and spends a few hours every night keeping watch. This is required of everyone and is part of the agreement people make when settling here, or, like me, is just part of life. Although no one has ever refused, if they did, I'd imagine they'd be required to do something else to serve the village or be exiled.
We keep slaves here in Red Obelisk, but unlike in Balic, slavery has a time limit. Slaves may be purchased from passing caravans, or is imposed as a form of punishment, but may not exceed five years. We also have strict rules on how slaves may be treated. No pleasure slaves, gladiator fights, or unnecessary physical punishments are tolerated. Even still, or possibly because of, we have few slaves in Red Obelisk, probably only around a dozen at a time. When freed, some of the slaves decide to become residents of Red Obelisk, some travel to Balic, some join merchant caravans, and a few wander off into the wastes.
The trading houses of Amketch, Wavir, Shom, and Rees all have trading posts in the village. Wavir and Rees have warehouses as well, but these are very small and probably appear as windowless homes to outsiders. The merchant houses contend with themselves to offer us the best goods for our gemstomes, feathers, hides, and livestock. This is favorable to Red Obelisk, obviously, for if they decided to monopolize against us, we would be ruined. We need them to survive, after all.
The first of the year is celebrated in Red Obelisk. We try to acquire strong drinks and special food for the day from the merchant houses. We still have to work, so the celebration is spread throughout the day, so all can participate. We tell stories, show off skills, and share whatever bounty we have been able to collect for ourselves. We give gifts to the families that welcomed new lives into their homes. From what I hear, these celebrations are rather pitiful compared to the festivals in Nibenay, but it is enough for us.
The dwarves and humans of Red Obelisk are united in the support and defense of the village. We do not distinguish between the two in laws or treatment. We live, work, fight, and bleed with each other. I feel this arrangement has come about due to necessity, for if we are not united, we will die. 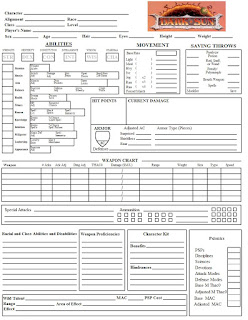