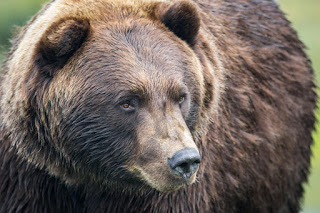 There are many creatures for the various monstrous manuals that have been officially added to Dark Sun. I added some unofficially for my game and I'm sure a lot of other DMs do the same.
There is no inherent problem with this, although the flavor text often doesn't fit with the Dark Sun setting. My goal is to list the various monsters that "don't fit" and rewrite their flavor text to make them fit.
If you're looking for a polar bear, look elsewhere.


Black
The so-called black bear actually ranges in color from black to light brown. It is smaller than the brown bear and the most widespread species by far.

Combat
Although black bears are usually not aggressive, they are able fighters when pressed. If a black bear scores a paw hit with an 18 or better it also hugs for 2-8 (2d4) points of additional damage.

The brown bear, of which the infamous grizzly is the most well known variety, is a bear of very aggressive disposition. Brown bears are more carnivorous than their smaller cousins, the black bears. The grizzly in particular will often bring down large game.

Combat
Brown bears are aggressive hunters. If a brown bear scores a paw hit with a roll of 18 or better it will also hug for 2-12 (2d6) points of additional damage. Brown bears will continue to fight for 1-4 melee rounds after reaching 0 to -8 hit points. At -9 or fewer hit points, they are killed immediately.

Cave
Cave bears are a dark brown in color and appear are larger versions of the brown bear.

Combat
Cave bears are quite aggressive, willing to attack well-armed parties without provocation. If a cave bear scores a paw hit with an 18 or better it also hugs for 2-16 (2d8) points of additional damage. Cave bears will continue to fight for 1-4 melee rounds after reaching 0 to -8 hit points. At -9 or fewer hit points, they are killed immediately.

Horned
The horned bear has thinner fur than its cousins, which allows it to wander the wastes without overheating. Horned bears appear as other bears with sandy colored fur, large curled horns, and bony protrusions all over its body.

Combat
A paw hit of 18 or better indicates a hug, which inflicts 3-18 (3d6+3) points of additional damage. These aggressive animals will fight for 2-5 rounds after being brought to 0 to -12 hit points, but beyond that they will die instantly.

Habitat/Society
All bears have excellent senses of hearing and smell but rather poor eyesight. The size shown is an average for the variety and larger individuals will, of course, be correspondingly more powerful.
Bears live in small family groups. Female bears are very protective of their young, and more than one individual has been badly injured when taunting or playing with seemingly harmless bear cubs.
Bears are most active in the morning and evening hours of the day, when it is cool.

Ecology
All of these ursoids are omnivorous, although the gigantic cave and horned bears tend towards a diet of meat.
Bears are fairly intelligent animals that can be trained to perform in a variety of ways, particularly if captured as cubs. Horned bears never allow themselves to be trained and die in captivity. Other bears can sometimes be found accompanying wilderness travelers.