It was pointed out to me by Rovewin of Athas.org, that Eelar are mentioned in the Black Spine adventure. However, they are not drawn up in any of the books. So, in an effort to rectify the situation, I have created a eelar below. 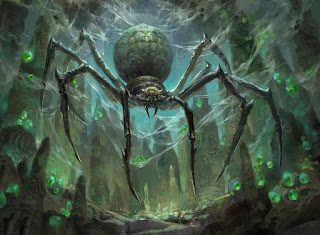 Eelar
It is believed by many scholars that the eelar are extinct. They were once slaves of the gith, if any survive they may remember their ancient enemies.
Eelar are a race of intelligent arachnids and may be mistaken for huge unintelligent spiders. Eelar have green tinted carapaces and greens eyes that seem to glow in areas of low illumination.

Combat
Workers will fight if the colony is threatened, but generally flee if encountered outside of their underground complexes. They are smart enough not to flee toward their home, instead leading their pursuers as far from their home as possible. Workers bite for 1d6 damage.
Soldiers hunt, in addition to guarding their homes and the queen. They attack with their large mandibles, biting for 1d8 damage and injecting poison. Soldiers have poison, type O, but with an onset time of 1d4 rounds. Soldiers are smart and use terrain to their advantage, setting up ambushes where tunnels fork, or surprising foes from behind false walls.
Queen eelar have powerful psionic abilties, with powers and abilities of a seventh level psionicist. Their powers vary based upon their individual desires, but are most likely to be telepaths. Queens may bite for 1d8 damage, but prefer to rely on their powerful psionic abilities. The psionic summary below is an example of a queen's abilities.
Psionic Summary
Level: 7
Dis/Sci/Dev: 3/4/12
Attack/Defense: 3/4
Score: 16
PSPs: 140
Clairsentience: Clairvoyance, Danger Sense, See Magic
Psychokinetic: Telekinesis, Ballistic Attack, Inertial Barrier, Molecular Agitation
Telepathic: Domination, Mindlink, Aversion, Awe, Contact, Ego Whip, Id Insinuation, Inflict Pain, Mind Thrust

Habitat/Society
Eelar colonies make their homes underground in a series of rooms and passages. The entrances are often disguised with piles of rocks. The passages are generally circular with a twelve foot diameter. The passages are smooth, with very few places for intruders to hide. The nest is large enough to house a colony, but the passages are laid out in a straight forward, intelligent matter.
All eelar speak a language of their own, while soldiers have a 40% chance of speaking the language of the local dominant group (ex: elf, gith, draji). In addition to their own language and the language of the local dominant group, queen eelar speak an additional 1d4 languages.
Unlike unintelligent insect species, both male and female eelar make up the ranks of workers and soldiers. Non-queen females are sterile. Soldier and worker males mate with the queen to produce offspring and it is considered an honor to do so.
Besides laying eggs, queens guide the colony with their superior intelligence.

Ecology
Eelar soldiers provide meat for the colony, by paralyzing creatures. Workers then wrap the victim in web and carry them back to the colony. Workers gather vegetable matter, which they use to produce purple honey for young eelar larvae. This honey may be eaten by adult eelar in an emergency, but is distasteful to them. This honey is stored in hexagon shaped cells made of wax.
When producing a new queen, worker eelar produce a special royal jelly honey. Consuming
one pint of royal jelly each day will fulfill all of the nutritional needs of a medium sized character.