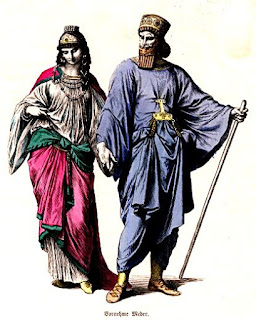 The group was sitting in the Blue Kank, talking about what they should do the next day. They decided that they were not feeling well enough to journey out of the protection of Urik. A jovial man, with a square cut beard and colorful blue and gold robes, walked up the group's table. He asked Shade, the one with the nicest clothes, if Julius, the one in rags, was for sale.
Shade told him that Julius was not a slave, but was curious how much he was worth. Julius protested loudly. The man chuckled and asked Shade if Julius had any special skills. Julius protested again. The group, with the exception of Julius, all started laughing when Shade said Julius did have special skills, as a pleasure slave. The man offered Shade three silver, but was obviously joking.
Julius pointed out that he couldn't be sold, unless the man had a merchant's license. The man informed them that he did have such a license. They then told him about the bone broadswords they got from the bandits and the bone short swords Julius had crafted. The man invited them to go to his stall in the merchant quarter the following day. He explained that the stall was blue and gold, like his robe. The group agreed to meet him and the man walked away.
The group started teasing Alaxander about his good looks, saying that he'd sell for more. Vashti thought selling Alaxander and then having him teleport back to the group was a good idea. Alaxander explained that if the slave taker discovered that Alaxander could use the way, they'd put an obsidian circlet on his head and he'd be really trapped. Julius said that it was worth the risk and everyone laughed.


Jessel entered the Blue Kank and the group was happy to see him. They noted that he did not look his best, as he walked over the table and greeted them. He wanted to know the plan and the group explained that they were going to try and seek the druid that Kalino knew about and maybe try to find Abu along the way.
They retreated to their beds to sleep. Vashti and Kalino got private rooms, while Shade and Alaxander slept in the common room. Julius and Jessel slept in the stable, Julius with their kanks and Jessel in his own stall.

Jessel was woken up and as slim human man was trying to open his pack. Jessel grabbed him and forced him across his knee, spanking and lecturing him. The man screamed, but Jessel did not cease his disciplinary action. When Jessel had finished, he tossed the man out of his stall and locked it behind him. Julius had heard the commotion, but he ignored it.
Hours later, when everyone woke up, the group met in the common room for breakfast. Julius ate from their stored meat, as he didn't want to spend money he didn't have to. Kalino accused Julius of being a miser, but Julius denied it and claimed he was being thrifty. The group was still in bad shape, so they decided to stay in Urik for the day.
Vashti preached her sermon first, followed by Jessel. They both drew crowds and were able to teach the small group about reverence for water and care for the earth. The thorny vines growing out of Vashti were becoming more difficult to hide and she got several stares. Jessel thought it wise not to let people know about her deformity and Kalino suggested getting her a veil. Vashti told them that she had discovered that using cell adjustment kept the growth at bay, but could not reverse it.
They split up, with most of them going to the marketplace, while Julius decided to sit outside of the Blue Kank and carve a bone shortsword. Everyone just wanted to see what was for sale and discovered that Urik was the city with high-quality obsidian items and weapons. Jessel bought, and shared, some honey covered larvae.
They wandered into the upper class area of the market and discovered a nice tavern called the Silver Wheel. They decided to return to it that evening and partake of the higher quality food and drink. They saw a low stage in the Silver Wheel and were excited at the music they might enjoy that evening.
Meanwhile, Julius was quietly carving his sword when a templar, flanked by two guards, approached him. The templar asked Julius if he had a weapon crafting permit, which he did not. The templar looked at Julius' beggar-like clothing and decided that a bribe was out of the question. He took the unfinished sword and threatened Julius with enslavement should it happen again. Julius showed deference to the templar and the templar moved on. 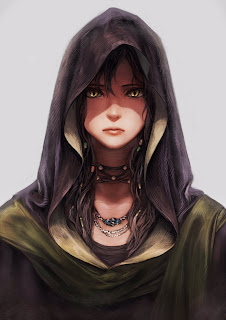 As the templar walked away, an attractive human woman with exotic, strange eyes approached Julius. She whispered that the templar was filthy and asked Julius if he was okay. Julius confirmed that he was. She asked Julius if he was thirsty and Julius confirmed that he was that too. She invited Julius into the Blue Kank for a drink. Julius accepted. She said her name was Kiara.
She talked with Julius, telling him that she was a merchant from Raam. Her small caravan was ambushed by raiders and she was forced to flee. She was only a day and a half from Urik, so that's where she fled to. Julius told her that they were going to Raam and asked if she was heading back there. She admitted that she didn't have much of a plan, but it might be a good idea to start over again. She then asked if she could accompany the group to Raam, she wasn't much of a fighter, but she had the will and could make unliving objects move. Julius said he would have to talk to his friends first.
When the group returned to the Blue Kank and saw Julius talking to a pretty lady, they kept their distance. They whispered about Julius' possible intentions with the young lady. Julius saw them, however, and waved them over to the table.
They sent Shade over to the table, because he was the most unattractive among them, and had Alaxander shield his face from the girl and pretend to be shy. The girl enthusiastically greeted them and introduced herself. Her gaze did not linger on Alaxander, as they thought it might. She told them her tale and asked if she could accompany them back to Raam. Besides the way, she was also an accomplished cook and negotiator. The group talked briefly with her and then agreed to let her accompany them.
They then told Julius and Kiara about the Silver Wheel and asked if they would like to accompany them. Kiara turned to Julius with excitement in her eyes, but Julius said no. It was obvious to everyone that Julius was not romantically interested in Kiara, so she turned her gaze, shockingly, to Shade. Shade quickly invited her to accompany him to the Silver Wheel and she accepted.
Shade and Kiara walked arm in arm to the Silver Wheel, with the others walking a few paces behind them. Vashti was wondering why Julius wasn't interested in Kiara and Kalino suggested that it might be because he'd have to spend money on her. Vashti, Kalino, Alaxander, and Jessel laughed, but Shade and Kiara were too far away to hear.
Shade was dressed nicely, so when they entered the tavern he was greeted and everyone else was assumed to be his servants. Shade played along and was seated at a nice table, tipping the head waiter a couple of bits. Shade was brought some clean water to drink, while they decided what to eat. The group was pleasantly surprised that they got to chose what they were going to be eating and drinking, as most taverns have a very limited menu.
A group of four bards came out playing instruments and singing songs. There were four belly dancers also, who danced through the crowd. The group decided to go dancing on the small dance floor, Shade with Kiara, Jessel with Vashti, Alaxander with a middle-aged noble woman, and Kalino with a young lady. Even though most of them danced poorly, they all agreed that it was a good time.
They ordered house ales, spiced meads, kitsu with an agave glaze, finely sifted rice bread, and green leafy vegetables. For desert, they had cabra melon with drizzled kank honey. They all agreed that this was the best meal they had ever eaten. The bill came to eighteen ceramic pieces, which is what the average free citizen earns in one-hundred eighty days. They tipped the head waiter two ceramic and the lead chef six ceramic. The Silver Wheel workers both planned on putting the tips towards the cost of their freedom.
Discovering the two workers were slaves made the meal a little less enjoyable. Kalino muttered under his breath and inquired to the chef how much it would cost to free him. The chef told him it was seventy-five ceramic pieces, which Kalino could not afford. Kalino wished him luck and told him that if he ever got enough, he would return to free him. The chef thanked him and went back to work.
The group walked back to the Blue Kank to sleep. They were stopped twice by templars for being out past curfew, but Shade's fancy clothes earned them enough regard, for the templars to send them on their way.
Julius had already retreated to the stable to sleep. Vashti, Kalino, and Shade all rented private rooms. Shade invited Kiara to join him and she accepted. They cuddled and went to sleep. Jessel got a special half-giant room, which was less cold and noisy than the stable.

After breakfast and sermons, the group was healed with the elemental magics provided by Vashti and Jessel. They started discussing their plan to go to Raam. They were hoping to find another caravan to guard. A caravan operated by a house that did not deal in slaves.
The went to the warehouse of House Wavir and were disappointed that the merchant house did not have a planned caravan to Raam for another three weeks. The group decided that they were on their own.