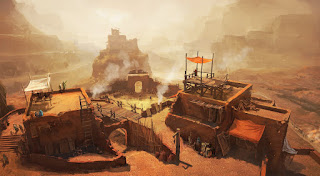 I've had the misfortune of running across a group of dwarves who are not as welcoming and friendly, as most dwarves are. I was working under a trader and we were looking for new trade villages in the desert north of the Tablelands. We ran afoul of the group of dwarven bandits. They killed the trader and most of the crew. I believe I would have been killed as well, had I not fled the carnage. I later learned that we had run into the territory of a bandit gang called Kel's Lot.
It took quite a bit of searching and favors, but I found a dwarven woman who had lived with Kel's Lot in her youth and departed when she became disenfranchised with the group. She asked not to be identified. I accepted her simple request, even though I doubted the bandit's could reach her in her present location.


To understand the bandit's of Kel's lot, you have to understand their leader and why they follow him. Kel is an old dwarf, very old, but you shouldn't think this makes him weak. He runs the village they call home as a benevolent tyrant, using his skills as a trained warrior and his magic of an earth priest to enforce his laws. He's not cruel, but he adheres to the letter of the law without mercy.
Kel only accepts dwarves into the group, as he believes dwarves are superior to other races. As the longest lived race, he and his followers presume that dwarves should rule over the, as he calls them, lesser races. He tells a tale about how the other races tried to exterminate the dwarves a long time ago. This, he claims, proves their jealousy and shortsightedness. He hates muls and thinks the dwarves who help produce such offspring are traitors to all dwarves everywhere.
I have to tell you that I believed all of this too, but as I grew up I saw the world for what it is.

I interrupted here and asked her what she meant by seeing the world for what it is.

The world is a mess! Look around. Dwarf, Elf, Human, we're all struggling to survive, to just live. Kel doesn't mingle with other races and I think he'd die before he did. That's just stupid. He won't admit that without the other races to raid, his little village wouldn't survive. He needs the other races just as much as your people need us dwarves.
Back to the topic at hand though. Now, where was I? Oh, yes.
Kel was born and raised as a slave in Raam, so I guess I can understand his bitterness. He was owned by humans and almost died in a mining accident. That's when he answered the call of the earth and escaped into the wilderness. He learned to fight from some dwarves in Urik and served the Urikite army. He talked a group of dwarves into following him and his vision of a unified dwarven race, ruling over the lesser races. They moved into an abandoned village in the desert and took up banditry. That's ancient history to you, Kel was young when he did all that and most of the dwarves in Kel's Lot were born in that village. 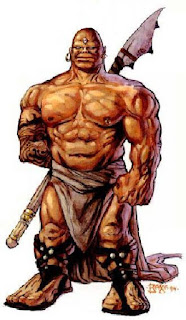 Kel still leads raids, but often serves the role of general and magical support. He shows no pity for those who resist, killing them outright, unless they are a dwarf. He tries to capture the dwarves and offers them membership in his bandit gang. Other races and the dwarves who refuse to join the bandits are allow to keep whatever the bandits cannot carry away and released into the southern desert. Weapons and armor are always taken by the bandits, or destroyed, to discourage retaliation. Of course, defilers are always killed as well.
Scouts watch the surrounding area for intruders and raiding targets. Weak targets will be outright attacked, while targets that are more powerful will be harassed and forced to leave the area. To make up for their lack of speed, the scouts ride kanks when possible. Kel's Lot raiders favor ambush tactics. Trenches to slow wagons or disable animals and surprise attacks from cover.
Kel would like to gather the other bandit tribes in the area into a large bandit nation. He insists that he, or another dwarf, would have to lead the nation, if it was to survive and prosper. He acts as if the other bandit lords of the region are beneath his notice and does not send envoys to speak with them, however.
The village itself doesn't have a name, called the village by the dwarves of Kel's Lot. It's made up of about a dozen buildings, built on the foundations of the village's past inhabitants. It should be obvious that all of the buildings are sized for dwarves. I never learned why the village was abandoned by the original inhabitants. The well still provides water, and there isn't anything too dangerous living nearby, so it's a mystery. Kel might know, but hasn't said anything. Kip are raised around the village to provide a constant food source for the village, supplemented by food taken in raids.
There are about one-hundred dwarves in Kel's Lot and all are trained in combat. Children are taught to fight as soon as they can walk. There is a strict hierarchy among Kel's Lot. Kel is the uhrnomus and he has two uhrnius beneath him. One uhrnius organizes the bandits, scouts, and raids. The other administers the village and ensures all of the raided goods are distributed. Each uhrnius has about five uhrakkus each. These uhrakkus have even lesser duties. Kel demands that the hierarchy is strictly adhered to. One of the unhrnius is Giki and he is fanatically loyal to Kel. He is likely to take over when Kel eventually passes away.
I'd advise carrying extra goods and hiring dwarf guards if you plan on traveling in the western Glowing Desert. Kel's Lot is likely to not kill your guards and will simply take the extra goods and leave you in peace.