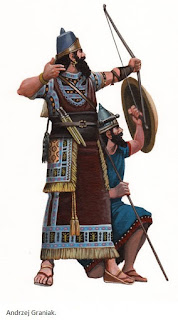 Jessel suddenly got a far away look in his eyes. He explained that earth was summoning him elsewhere. He opened a dimension door and stepped through, the group wishing him farewell. Vashti lamented that she wished water would summon her sometime.
Before leaving Urik, Julius and Vashti wanted to go to the merchant they had consigned their extra weapons to. Kalino chose to stay with their kanks and get them ready to go. They found the merchant and discovered that he had sold most of the weapons. He handed over the ceramic coins and the weapons he did not sell he was offered to keep, as part of his consignment payment. Alaxander purchased a hemp rope from him. They mentioned they were going to Raam and the merchant told them it was a six day walk.
Before leaving, Vashti decided she wanted to hire a mercenary to accompany them. She went to the area of the market where mercenaries where hiring themselves out and found an archer. His name was Abilkisu and he had been an Urikite soldier for two years. He spoke gith, which allowed him to communicate with Vashti. Alaxander had a light crossbow, which they gave him. Vashti and Alaxander purchased him some leather armor and a plethora of bolts. Vashti gave him one of her bone daggers as well. They offered him two bits per day plus food and water. He accepted. Julius thought it was a waste of money.
They left Urik along the east road, walking past Urik's wheat fields. They were watched by guards, to make sure they didn't steal any of the crops. The road was clear and well maintained. If not for the blazing crimson sun over head, it would have been pleasant.

During high sun, they camped along the side of the road, in the shade of the five foot tall wheat grass. They marched past the fields well after high sun and found a small Urik client village on the other side. Shade wanted to stop and sleep in the village, even though they would lose some marching time. Everyone else disagreed and Shade didn't argue. The group marched on.
As the sun set, the group found themselves on the border of the sandy wastes and stony barrens. Shade scouted the area and found a nice, comfortable, divot along the border. The group could sleep on sand, not rocks, and have a small semblance of privacy.
However, before they were settled, a gang of five bandits spotted the group and moved to surround them. The group saw the bandits coming and readied their weapons. They allowed themselves to become surrounded and then attacked, before the bandits could. The bandits were surprised.
Kalino used the will to grow an iron khopesh from his arm. Alaxander used the way to strike one of the bandits with a mental punch. Vashti summoned a floating hammer made of water, which attacked another bandit. Shade and Abilkisu fired at the bandits with their bows, while Julius fired a bolt of electricity with the way and struck one of the muls. Kiara kept the kanks in the middle of the group, keeping the animals calm.
The five bandits charged forward and the group could see that they were all muls. The muls were skilled with their carrikals. Alaxander, Abilkisu, Julius, and Shade were all struck with moderate wounds. Alaxander kept battering the mul attacking him with the way, while Shade dropped his bow and began striking with his bone alhulak and iron dagger. Kalino slashed with his arm-khopesh. Vashti kept beating the mul with her water hammer, while Abilkisu shot at the one attacking him with his crossbow. 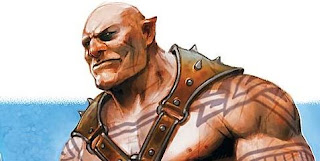 The muls fought wildly, not giving up due to some mild scratches. They were causing consistent minor wounds to the group. Abilkisu kept backing away and shooting his crossbow, while Vashti struck out futilely with her water hammer and bone club. Kalino was effectively slicing into the muls exposed flesh. Shade struck repeatedly with his alhulak and dagger. Alaxander used the way, and Julius attempted to do the same. Julius did notice that Kiara looked unafraid.
The muls showed no sign of halting their attack. Kalino sliced one of the mul's stomachs open and the mul fled, as best he could. Julius was finding it difficult to summon the power inside of himself. Alaxander knocked the mul out who had been attacking him. Vashti healed Abilkisu and he thanked her. The mul saw this and turned his attention on Vashti. Shade and the mul he was fighting traded blows with each other.
Kalino ran to help Julius, while Alaxander used the way to pummel the mul attacking Vashti. Shade and the mul attacking him continued to trade blows, Shade barely managed to keep the upper hand. Julius succeeded in using the way, but the rock he threw with his mind missed the mul he and Kalino were fighting. Abilkisu fired again at the mul attacking Vashti, while she attacked with her water hammer and bone club.
The mul who had fled from Kalino collapsed from blood loss. Alaxander, Vashti, and Abilkisu beat the mul they were attacking unconscious. Kalino wounded the mul he and and Julius were fighting badly and the mul fled. The mul attacking Shade tried to do the same, but he was knocked unconscious before he could make it very far.
Vashti healed the muls, before they could bleed out. Alaxander used his recently purchased hemp rope to tie up the four captives. They wanted to question them in the morning. Vashti magically healed the group, as much as she could. They finished setting up camp and set watch.

Vashti and Abilkisu kept watch. Abilkisu whispered to Vashti and pointed toward their captive muls. Standing next to them was a short human man. Vashti called out, when she recognized what it was. It was a Thrax, a creature that drains water from living beings.
Abilkisu began shooting at the creature and Vashti ran forward to attack with her bone club. The Thrax looked at her, annoyance on his face. When Vashti tried to hit the Thrax, he moved his body out of the way of her blow, but kept hold of the mul.
Her shouts awoke the group and they saw her in the middle of combat. Trusting Vashti, they joined her in attacking the creature. Alaxander used the way, without getting up, to mentally punch the thrax. Kalino rose and grabbed his chitin khopesh. Julius got up and began charging electricity with the way. Shade lifted himself up and grabbed his bow and arrows.
The thrax brushed his hand across Vashti's mekillot hide breastplate, but nothing happened. Shade shot with precision, striking the thrax in the neck and shoulder. Julius continued charging electricity, but was having trouble focusing his mental energy for doing anything else. Kalino ran forward, but couldn't hit the agile thrax. Abilkisu was having trouble shooting the thrax, due to its quickness. Vashti was also having difficulty hitting the thrax.

The thrax, again, brushed his hand across Vashti's breastplate, but this time, her breastplate decayed into dust. Vashti's eyes grew wide and she mumbled in anger. She used the way to grow a wyvern's muzzle, planning to bite the thrax. Kalino and Abilkisu missed their attacks. Alaxander struck with the way. Julius fired his electrical charge, but missed.
The thrax struck Vashti's chest and attached it suckers to her skin. Vashti screamed out in pain and fell unconscious, as the thrax pulled water from her body. Vashti's vines withered noticeably, which the thrax curiously noted. Shade was proving his skill, by shooting the thrax twice again. Alaxander struck with the way and Julius was having some difficulty concentrating. Everyone else missed the thrax.
The thrax dropped Vashti and ran to Shade. It brushed its hand across Shade's bow, but nothing happened. Kalino ran toward the thrax and threw a dagger, but the thrax dodged. Alaxander continued to use the way, doing little, but consistent damage. Shade dropped his bow and drew his alhulak and dagger, striking at the thrax. Julius was able to hit the thrax with a rock thrown with the way. Abilkisu missed when he fired at the thrax.
The thrax struck Shade in the chest, but was unable to attach its suckers to his flesh. Kalino was finally able to strike the thrax with his chitin khopesh and sliced it in the stomach. Abilkisu checked on his employer and shouted something, which no one could understand. Alaxander continued to use the way to damage the creature and Julius tried to use the way, but missed. Shade missed with his alhulak, but stabbed deeply into the creatures shoulder with his iron dagger.
The thrax fled. Alaxander took one last strike with the way, but was unable to fell the foul creature. It fled into the darkness, too far for the way and too dark for arrows. The group was happy to see the creature go, but were worried that it might return. They checked on Vashti, who was alive, but very dehydrated. The mul who had been attacked was dead.