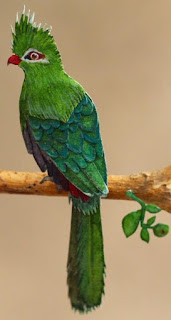 It was pointed out to me by Rovewin of Athas.org, that the Kvale is mentioned in the Ivory Triangle boxed set. However, they are not drawn up in any of the books. So, in an effort to rectify the situation, I have created the two mentioned kvales below.


The kvale is a bird that mimics melodies that it hears. The most common melodies that it hears come from Gulg and Gulgs try to teach the kvales around their city different tunes. Lalali-puy has declared it illegal to kill a kvale. Anyone caught with a slain green kvale is punished with enslavement and a red kvale is punishable by death. Nibenay has a bounty on red kvales of 5cp a head.
Kvales are considered beautiful and their feathers are desirable for use as decoration. Green kvale's are prized as pets all over the Tablelands. Red kvales are protectors of the forest, it is believed the Oba bred them as extra protection for her domain. In truth, it was an ancient group of druids who bred the birds, although this fact has been long forgotten.
All kvales are approximately a foot tall and weigh 3 pounds.

Combat
Kvale's use their claws in combat, which inflict 1d2 points of damage for each claw. Kvales are able to make a swooping attack with their claws, when flying. To make a swooping attack, a kvale moves part of their flying movement, attacks, and then finishes their flying movement. Kvales may attack with both claws when swooping. Green kvales will only fight if cornered or protecting their nest.
Red kvales are able to cast spells as fourth level druids, with major access to cosmos and air, and minor access to water. Red kvales get no additional druid abilities. The standard spell list for red kvales is Bless, Cure Light Wounds, Curse of Tongues, Dust Devil, Steal Breath.

Habitat/Society
Kvales mate for life, so are often seen in pairs. Once a year, mating takes place and green kvale females lay 1d4 eggs and care for them until they hatch. Red kvales have a lower birth rate, only laying 1d2 eggs. Kvale eggs hatch after 22 days. Kvale mature after 180 days and are considered helpless until that point. Red and green kvales may interbreed, with a 25% chance the kvale will be red and a 75% change it will be green.
Kvales make their homes in nests in the middle of trees. They prefer dense foliage. Red kvales will add branches to camouflage their nests. In addition, red kvales will make their nests near locations where the forest has been recently damaged and attack those who return to harm it.

Ecology
Kvale eat nuts, berries, insects, and small lizards. In turn, larger predators eat them.
Kvale feathers are in demand and can fetch as much as 3 ceramic pieces for every 50 feathers. Kvale meat is similar to other small birds. A single adult kvale provides 1 pound of meat and sells for 4 bits in the city-states.
As a pet, green kvales can fetch as much as 1sp, if sold in good condition to the right wealthy person. The wealthy enjoy having their kvales sing melodies for their family and guests.