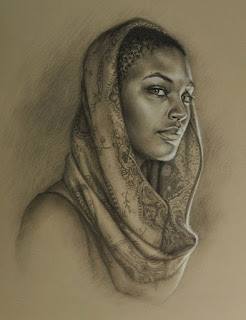 Vashti was born in the free village of Kuresh. Kuresh is hidden in the western slopes of the Black Spine mountain range, with a population of about forty-eight people, mostly human. The village survived by herding z'tal, farming, gathering, and trapping jankz. When desperate, they did not hesitate to raid small caravans on the Raam-Nibenay road. The villagers had struck a deal with the gith in the mountains and paid them in food and water to leave them alone. Beneath the village is a natural cistern that can support the small village.
Vashti knew she was destined for something more than the herding and gardening she grew up doing. She knew she wanted to serve the elemental planes, but she didn't know which one. She traveled to a client village of Nibenay and sought out an earth cleric. The earth cleric had another hopeful and buried him in the earth. When Vashti saw this, she backed out and explained that it must have been a different element calling her.
Years later she met a fire cleric and she walked into a bonfire and got scarred on the left side of her body and face. Years after that, she jumped off a cliff for an air cleric and was badly injured. While she was being healed by her village's native water cleric, she was admonished by the dwarf priestess and called stupid many, many times. It was water calling her the entire time.
After she healed, she was immersed in water and did not drown. At the same time, the village's psionicist worked to unlock her mind. She worked hard to redeem herself and make up for her foolishness. She also grew to hate the gith that extorted her village and made it more difficult to survive.
When Vashti was nearing the end of her apprenticeship, her village did not have enough food to pay the gith tribe to leave her village alone. They demanded flesh to sell into the slave trade. Vashti volunteered, knowing she could easily escape. Two other villagers, Demitrius and Salvador, went with her. They were traded to slavers, who commonly dealt with the foul gith.