Session Fifty-One: Stone Walls do not a Prison Make 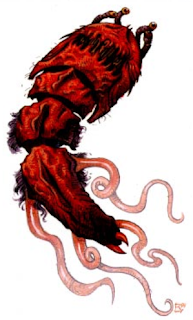 Shade fell toward Vashti and Kalino, crashing into them. Vashti and Kalino were able to hold onto each other. Shade grabbed Kalino and switched his perception of down. Vashti and Shade began pulling Kalino upward. Alaxander brought Julius back up with the group.
Everyone was continuously changing their perception of down, so they could remain in the same area as the others. This gave the effect that they were moving in small circles. Alaxander alone was so adept at focusing his directional perception that he was able to remain perfectly still.
The eye of earth crawled out from Jessel's tunic and poked his cheek. It then indicated which direction for the group to go. They began falling in that direction.
Twenty-five minutes later, the group saw some creatures swimming through the silt. They were not sure what kind of creatures they were. The creatures seemed to be swimming around a swirling silt vortex.
Alaxander and Julius used the way to attack the creatures. Alaxander punched with his mental energy and Julius detonated the sand vortex. Both creatures were injured and the sand vortex pulled in one of the creatures. Shade, Kiara, Kalino, and Jessel fell into the creature and began striking it with their weapons. The creature bled maroon colored blood.
The creature was badly injured and created a silt cloud to escape. The second creature emerged from the vortex and attacked Jessel. It gripped his arm tight and quickly over-powered Jessel's mental defenses. Jessel began to feel that the creature was causing him pleasure, not pain.
Everyone else pounced on the creature and quickly killed it. Jessel felt a slight disappointment at the loss of the blissful feeling. He shook his head to clear it.
The eye of earth pointed at the vortex. After a quick discussion, everyone decided to trust the eye and enter the vortex. Jessel went first and everyone else followed. 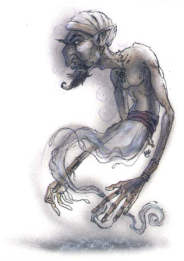 They found themselves in a sphere of compacted swirling silt. Inside was a bored looking man. He had angular features with large hands and a large nose. He had an impressively sizable mustache and where his legs should have been, there was just swirling silt. Behind the man was a small silt vortex in the side of the sphere. The man greeted the group and asked whom they were and what their business was at detention center 743.
Jessel expertly lied and told them that they had a prisoner transfer from detention center 1138. The man, who Vashti knew he was a jann that had betrayed his creators and sided with their enemy, looked at Jessel with a confused expression. He explained that a prisoner transfer was highly irregular and that he had not received notification of a prisoner transfer in a very long time.
They could all see that the genie was very bored with his assignment and started chatting with him. The genie was so happy to have gracious company, that he was more open to the group's lies and half-truths.
He questioned why mortals were handling something so simple as a prisoner transfer, when they should be on Athas, growing the Silt Sea. Jessel explained that they were just doing a small favor for their patron and would then return to Athas. The genie accepted their explanation and told them to continue on, as long as they had the password for the guardian in the next sphere.
The group said they had the password and tried to talk the genie into revealing it. However, it quickly became evident that the jann did not know the password. The group decided to take their chances and crossed into the next area.
The group passed through the vortex and found themselves in another sphere. Floating with them in the orb was a huge scorpion made of silt. Everyone was silent for a moment and just stared at each other. After the prolonged silence, Vashti asked the scorpion if it could speak. The scorpion responded by attacking.
Shade and Kalino were attacked with its claws and Jessel was stung with it's tail. The venom it injected into Jessel's bicep was brutally painful, but Jessel was able to shake it off. Everyone attacked the giant creature.
Because they used good tactics and surrounded the beast, they were able to defeat the guardian with minimal injury to themselves. Behind the scorpion was another vortex, which the group passed through.
The group emerged into another sphere, where pillars of swirling silt contained six figures. None of the figures were conscious and the eye of earth indicated that the dao they were looking for was through another vortex. The group ignored the figures and moved into the next vortex.
The group emerged into another sphere. This sphere had a pillar of swirling silt with a large dao inside of it. The dao was unconscious. When the group moved toward him, a fourteen foot tall silt paraelemental rose in front of them. The silt paraelemental did not move to attack, until Vashti used her magic to create a hammer made of water.
The paraelemental was a vicious combatant and turned into a raging storm of silt. The silt storm over-powered the group's magical glasses and wounded them badly. Jessel dispelled the magic on the containment pillar and the pillar disappeared. 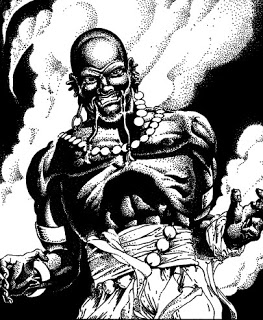 The dao confirmed that he was Kwala, but he was very weak. He told Jessel to wish them into the ethereal plane. Jessel started to do so, but the silt paraelemental attacked him. Vashti pushed Kwala out of the way of the fight, but the silt pillar reappeared and trapped her inside of it. She fell into a suspended state.
Alaxander used the way to open a large dimension door and then used the way to push the silt elemental through it. The silt paraelemental was only one-hundred yards away and would soon return. Jessel quickly made his wish.
Everyone started disappearing one by one. Kwala, Jessel, Vashti, Shade, Kiara, Kalino, and Julius. The silt paraelemental was moving through the outside of the sphere as they disappeared. Just as it reached out its arm to grab Alaxander, he finally disappeared.