Session Fifty-Four: Vermin in the Dark 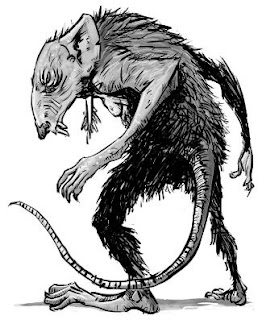 Shade backed away from the cliff edge, as the tari continued shooting arrows at him. He hid in the shadows and waited to see if Alaxander would teleport back up to him. When Alaxander failed to appear, Shade sneaked away along the clifftop.
Meanwhile, Alaxander was goofing off below. He teleported a large rock into the midst of a group of tari, damaging some of them. He got stabbed with a bone tipped spear for his trouble. Mohamed said he could feel where Alaxander had gone and ran around the building to find him. Mohamed had not healed from their last encounter, but did not seem disturbed by his many wounds. Alaxander attempted to summon his mental strength, but was distracted by his fear of the undead. Mohamed then punched Alaxander twice and had obviously been imbued with supernatural strength. Alaxander teleported back to the top of the cliff. He began searching for Shade among the rocks. Alaxander attempted too use the way to dampen the noise he was making, but created a loud boom instead. Knowing he had already been discovered, he used the way to raise his voice and attempted to frighten the tari. Alaxander then used the way to increase the light levels on the top of the cliff to try and find Shade. Alaxander could see a group of tari soldiers and swarms of rats rushing toward him. He tried frightening them away again, by increasing his voice with the way. It did not seem to have the desired effect. The tari had a difficult time striking Alaxander, but one of the rat swarms covered him and wriggled into his armor. He was getting bit and scratched, so he teleported away. He left the rats behind.

The rest of the group bid Jessel farewell, as he was called away by his element lords. He opened a dimension door with the will and stepped through. They complained that they could have used his help and his elemental lords were a little inconsiderate.
Shade returned to the group and told them about their failed scouting mission. They asked about Alaxander and Shade told them that Alaxander was harassing the tari with the way. A few minutes later, Alaxander appeared with a loud bamf. Vashti used the way to spy on the village from a bird's eye view. She saw the tari arranging search parties. The tari were using giant rats, instead of searching dogs. The group decided to hide a greater distance from the settlement. 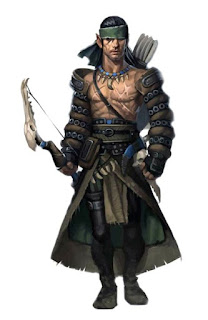 Shade lead the group to a well-concealed plateau, with a narrow canyon entrance. He also used his outdoor skills to cover their tracks and scent. The group set up a watch and went too sleep.
Shade was awoken in the night by an orange man rummaging through Alaxander's backpack. When Shade called out, the man grabbed the backpack and started to flee. He attempted to climb down a short, ten-foot, drop and tumbled to the ground below. Shade jumped down and landed next to the man. He tried to explain that he was not going to hurt him, but they did not share a common language. Shade drew his iron dagger and indicated where he wanted the man to go. The man obeyed.
Everyone was awake when Shade returned with his prisoner. Vashti could speak urikite and the man spoke it also, with a heavy accent. The man explained that he had escaped from the tari settlement when the group had caused an uproar. He was thinking about hiding where the group was hidden, but they were already there. He then explained that he was just trying to get supplies to live. Vashti gave him food and water.
He introduced himself as Halim. He explained that two years ago, the village was attacked and conquered by the tari. The tari executed the fighting people and enslaved everyone else. They also killed the villages shaman and anyone who could use the way.
The group invited Halim to stay with them and told them that they were going to try and free his people. Halim was condused, as Juius was dressed in rags, like a slave. Vashti explained that Julius was just cheap and didn't want to buy nicer clothes. They drew a layout of the settlement in the sand and got an idea as to where the slaves were held and other details about the small settlement.
They asked about Mohamed and the orange man told them that he had arrived the day before the group had attacked the settlement. He knew nothing of why the dead man was there, only that he met with the tari leader. The group thanked him for the information and Kalino let him borrow his blanket, as the man was only in a loin cloth. Kalino used his cloak too keep warm on the frigid night.

They awoke late into the morning. The group set out to find water and discovered a small natural cistern. They drank deeply and refilled their waterskins. Vashti preached her morning sermon and thanked the lords of water for their generous bounty. She then used her magic to refill the cistern somewhat.
Vashti could feel the plant part of her body slowly growing deeper into her flesh and attempted to use the way to hold back the growth, as she did every morning. Unfortunately, she failed to do so. Everyone gasped as the plants growing on Vashti quickly consumed the rest of her body and she collapsed to the ground. She curled up into the fetal position and vines quickly covered her form. The group stood, dumbstruck.
"Is Vashti dead?" Alaxander said after a minute of silence.
Kiara bent down to investigate the plant matter. Kalino joined her. Kalino informed the group that the plants were many different species found throughout the tablelands. Kiara explained that the plants were pulsing at the same rate a heart would beat, so it may be that Vashti was still alive. Everyone breathed a sign of relief.
Julius used the way to try and contact Vashti. He was surprised when he felt her mind open and he saw himself hovering over a small pond. Around the pond were various plants and trees. There was wind and quaking, that rocked the mindscape around him. He called out to Vashti and, while her mental form did not appear, her voice rang out all around him.
Vashti said that she was okay. She continued, telling Julius that she could feel a lord of water reshaping her body, with the help of a spirit of Athas. She had no idea what she was turning into. Julius exited her mind and told the group what he had learned. Everyone felt better knowing she was okay, for more or less.
Shade went hunting and killed a huge lizard. He spent a great deal of the day dragging it back to the camp. Kalino trained Alaxander in the spear. Julius just sat around and meditated some. Halim just watched and relaxed in the shade the canyon's walls provided. Vashti was still a plant.
When Shade dragged the lizard back, he expertly skinned it. Kalino assisted Shade with butching and preparing the meat for drying. Kalino tried to keep various creatures away from the drying lizard meat, but they lost a good portion of it to scavengers.
Once dry, they divided up the meat among themselves and wrapped the rest in some cloth Alaxander had been carrying. They stashed the bundles of meat near the cistern to keep them safe. Then, they settled down to sleep. 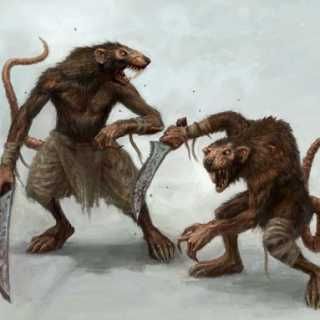 During Shade's watch, he spotted movement one-hundred and fifty yards away, in a wider part of the canyon. If he were human, he doubted he would be able to see, but with the moons out, he had enough light. He saw three tari with a human. The human's hands were bound behind his back and around his neck was a lead. The tari were looking around and then forced the human slave to his knees. One of the tari raised his obsidian scimitar above his head.
Before the tari could strike, Shade raised his bow and shot the poised tari with an arrow. The tari stumbled back. All three tari turned and fled away from the group, back toward their settlement. Shade fired another arrow, but they were out of range. The human slave fell to the ground and closed his eyes.
Shade crept over to the orange-skinned slave and grabbed his lead. The man did not speak a language Shade could understand, so Shade prodded the man with his iron dagger and indicated which way he wanted the man to go. The man did as Shade indicated.
When Shade had lead the man back to the group, he cut his hands free and removed the lead. Everyone had awoken at the commotion and Kiara was able to speak to this slave, as she also spoke urikite. The man was named Omar. Omar and Halim greeted each other warmly. They provided Omar with water and dried lizard meat.
Omar explained that the dead man, Mohamed, had told the tari leader that if they took the slaves deep into the canyons and executed them, that it would flush out the group. Alaxander cursed Mohamed under his breath, because the undead man was right. The group knew that the tari would be returning in force and discussed if they should flee and hide elsewhere, or stay and fight. 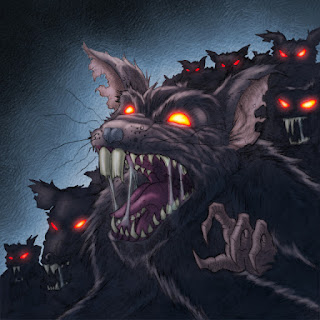 They were in a good defensible position and they couldn't take Vashti with them, as she was still a large plant and rooted to the ground. They decided that they would stay and fight. Omar and Halim explained that they were not warriors, but would help in any way they could.
They spent the day setting up their defenses. The only way to get into their canyon was a small, five-foot gap. Kiara and Kalino would guard that opening, forcing a one on one battle with the tari warriors as they funneled into the canyon. On top of the thirty foot canyon walls, they set up some rock barricades with sharpened sticks on the outside. They also piled rocks to drop on the tari below. Shade, Julius, and Alaxander would take position there. Halim and Omar were given some extra machetes Shade had been carrying and they would stay back and guard Vashti.
They were hoping for time to do more, but as the sun dropped below the horizon, they could hear the stomp of many feet stamping toward them. They got into position and they watched as fifty tari warriors poured into the canyon, with half a dozen giant rats and a hundred normal rats. Mohamed was with them.
The tari paused for a moment and the tari leader screeched loudly and pointed with his bone machete. The tari warriors, giant rats, and rat swarms rushed towards the group.