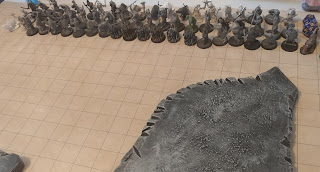 The tari raced forward, the swarms of rats rushing in front of the horde. Kalino watched the mob surge toward Kiara and himself. Kiara's breathing was measured and calm, she was obviously well-trained in the templarate of Urik. Kalino could see Shade on top of the cliff, smoothly drawing arrows from his hip quiver and firing them into the oncoming rush of vermin. 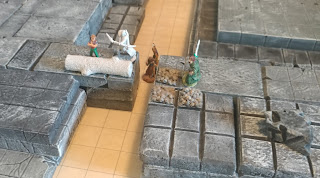 Suddenly, the ground erupted in the midst of the rat swarms, tossing chunks of earth and rat corpses through the air. It was obvious hat Julius was using the way and Kalino was amazed at the power the mind could unleash. Kalino was a preserver and could unleash destructive and wondrous energies, but he had to take the power from vegetation and shape it into what he desired. The way didn't work like that and Kalino, in that moment, thought it would be wise to develop his will into the way at a later date. If he survived.
Kalino spotted Mohamed pushing in front of the tari, charging toward Julius' position above him. The undead man had a few arrows sticking out of his body, but the arrows did not impede his movement, nor seem to cause him any pain. He was unarmed, which made Kalino even more uneasy. Foes who chose to be unarmed were generally very powerful and undead were unpredictable.
Kalino fought the urge to rush into combat. The group had made a sound plan and, even though he was sure they were going to all die, it was a good plan. He knew that they would probably kill half the army, as they surged into the gap that he and Kiara held. However, in the end, he was sure they would fall. There was no way five could defeat fifty, but they would make them pay for their victory in blood.
Kalino kept his eyes on Mohamed and all of a sudden, he vanished. Julius cried out something that Kalino could not hear, but there was satisfaction in his voice and not fear. Kalino shook in head in amazement again at the power of the way. He turned his attention back to the oncoming horde, making a mental note to ask Julius about what he did, if they survived.
Right before the mob of vermin crashed into Kiara and Kalino, another mental blast killed more of the rat swarms. Then, Kiara and Kalino began stabbing and slashing the pests, as they swarmed over them. Most of the rats could not squeeze into his clothing and for that Kalino was grateful. It only took a few minutes to kill the rat swarms, but the tari behind them were quick to fill the gap.
Out of the corner of his eye, Kalino could see the tari scaling the canyon walls, trying to get around their position, or attempting to attack Julius, Alaxander, and Shade. Kiara and Kalino slew a tari in the gap, but another one stepped forward to fight. Kiara used her obsidian wrist razors and Kalino used his iron tipped spear with deadly efficiency. However, for every tari they killed, another took their place. There seemed no end to the vermin horde.
The horde had completely filled the gap and Kalino saw his opportunity to strike a major blow against the tari forces. He reached into his component pouch and grabbed a pinch of sulfur and ball of bat guano. Without bothering to hide what he was doing, he held out his hand and summoned energy to cast his spell. The rush of life energy was euphoric and Kalino had to fight the urge to hold on to it. He siphoned off the energy he needed and commanded the rest to return to the plants they truly belonged to.
Having the energy inside of him made him feel extremely powerful and alive. Colors looked brighter, sounds more distinct, and smells more precise. Using the material components in his hand, the energy he held inside of him, and the arcane words he spoke, he molded the energy into the effect he had mentally prepared.
The energy rushed out of him as he spoke, "Gem'qul qaw' ghob jagh." A marble sized ball of concentrated fire quickly shot out of Kalino's pointed finger. The ball flew into the midst of the tari army and quickly expanded into a giant sphere of fire. The tari inside the sphere were incinerated by the magical flames.
The fire disappeared as quickly as it had appeared and the tari near the charred area temporarily paused, but the tari behind them quickly pushed them back into the fray. They tari were worked up into a frenzy and called out angrily in their strange and harsh language. It wasn't long before the charred area was, once again, cover in tari. 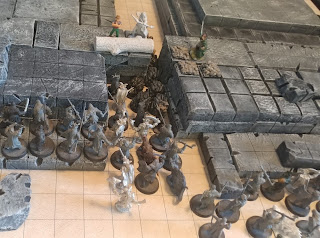 Kalino turned back to his spear and stabbed at the trai attacking Kiara, he could hear yelling and clashing on the cliffs above him. A tari jumped down to flank Kiara and Kalino. Kalino turned to engage the tari, leaving Kiara alone to guard the gap.
Out of seemingly nowhere, Jessel ran up behind Kalino and began attacking the tari as well. Kalino was confused, but pleased to see his friend. They quickly finished off the tari and Kalino turned back to assist Kiara. Jessel began climbing the cliff face, presumably to help Shade and Alaxander.
Kiara held her shield in front her and called out to her master. Two large lion-like eyes opened above her head and quickly looked around. They closed and disappeared. Moments later, five of the dead tari rose to attack their former allies. Kalino did not particularly like undead, but could not argue against the help.
Some of the tari turned to attack the skeletons and for the first time, Kalino thought they might get out of the battle alive. Another tari jumped down, which drew Kalino's attention away from the battle in front of him. Alaxander teleported with a loud "bamf" and began assisting with the defense of the gap.
Another tari jumped down to attack Kalino from behind, but Julius jumped after him, kicking the tari in face and stabbing at him with his bone longsword.
The fight raged on and the tari forces were thinning. Kalino couldn't know the exact number of fallen tari, but their bodies were piled in the gap three or four high. Still, the tari soldiers kept coming, climbing over their dead. The skeletons managed to distract and injure some of the tari, but they fell, one by one to the tari forces.
The north cliff had been lost, Kalino knew and tari were occasionally leaping down from the cliff face to engage the group. Jessel climbed down from the south cliff to offer magical healing to Julius and Alaxander. Kalino kept guarding Kiara's back, attacking the tari as they dropped down from above, while she held the gap. It was obvious everyone was feeling the same fatigue as Kalino, as their attacks were slowing. 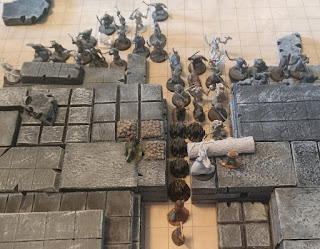 The south cliff fell to the tari as Shade was overwhelmed. His unconscious form was unceremoniously thrown from the top of the cliff to the ground below. Jessel rushed to him and was able to prevent him from dying, but his left arm was completely crushed. Due to her injuries, Kiara was forced to back away and call on Hamanu for the magic to heal herself. The gap was lost and tari pushed their way into the group's canyon.
Alaxander fell to a tari's attack next, followed by Julius. Kalino hoped that they were not dead, but could not check on them, as he was fighting tari to the left and right of him. His hands were soaked in blood and the spear slipped from his fingers. Kalino drew his bone khopesh and continued to attack the tari in the canyon. Halim ran forward to assist the group, but was quickly slain by the tari warriors.
Kalino was slashed with an obsidian machete on his forehead and blood ran down into his eyes. He lashed out blindly, striking the canyon wall and breaking his bone khopesh. He dropped the useless handle and pulled out his chitin khopesh. He was slashed by the tari across the thigh, before bringing his khopesh on the tari's shoulder.
Kalino jumped back and wiped the blood from his eyes. He chanced a glace around the battlefield and saw that most of his friends were down. Kiara was dragging Shade's body to safety, Alaxander and Julius were still down, and Jessel was fighting a tari and bleeding from wounds all over his body. There were only a few tari left, so Kalino turned back to his foe.
The tari was confident and stabbed at Kalino with his machete, but Kalino parried the strike and slashed the tari across the muzzle. The tari Jessel was fighting screamed out, as Jessel broke his leg. Jessel backed off, while the tari screamed and jabbered in it's strange language. Kalino was sliced on his arm, before killing the fiend with a well placed blow.
Kalino stumbled back and saw Jessel fighting with the last undamaged tari warrior. Kiara was down, but Kalino did not know when that had happened. Another tari was leaning against the canyon wall, unable to walk due to it's broken leg. Kalino limped toward Jessel and together, they killed the tari. Then, they turned to the wounded tari.
Kalino picked up his iron tipped spear and threw it, but missed. The tari picked up the spear and threw it back, but he too missed. Kalino picked up his spear.
"Jessel," Kalino gasped, "Can you heal any of them?" Indicating their allies.
Jessel shook his head, "Not magically." He drummed, "I have prevented them from dying, but they will not recover until tomorrow at the earliest."
Kalino nodded. "Well, let's finish this one." He said, while pointing at the wounded tari.
The tari was growling furiously and took a swipe at Kalino, as Kalino approached it. It missed and Kalino impaled it with his spear. Jessel loped over and struck the tari with his stone headed maul. The tari collapsed to the ground.
Kalino wiped the blood and sweat from his eyes and looked in the direction the tari army had come. Dead tari lay across the field like stones in the barren wastes. Vultures were already doing their grisly work and feasting on the dead.
"There's still some archers out there." Kalino uttered.
"We can't go after them." Jessel voiced.
"I know. We have to leave." Kalino shook his head. "But we can't take Vashti. She's formed some sort of cocoon around herself and is rooted into the rock."
Kalino pointed to where the Vashti cocoon was and Jessel could make out the ball of vegetation. from his position.
"I have one spell left. It's the ability to magically shape stone, so we can free her roots, without harming them." Jessel smiled.
Kalino breathed deeply, "Okay, let's grab them," He indicated their allies, "and go get Vashti. Somehow we have to get everyone out of here before reinforcements arrive."
Jessel nodded in agreement.